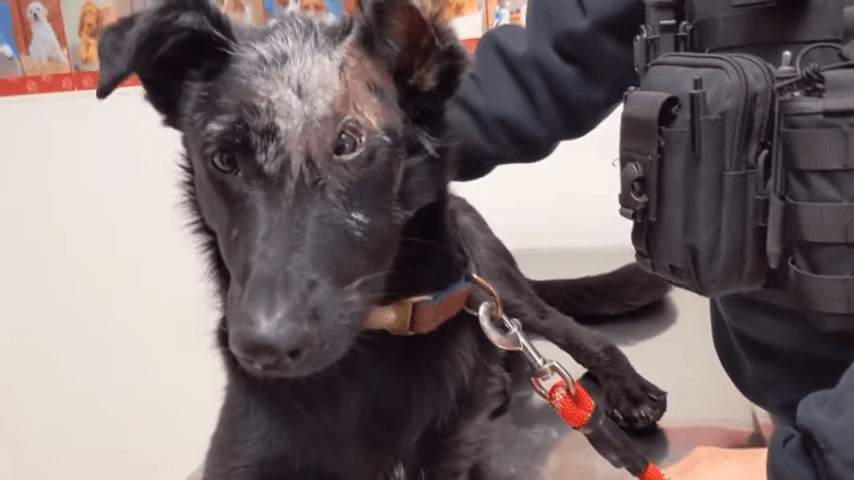 It’s amazing how strong and resilient dogs can be. They can suffer through the most arduous experiences at the hands of people and still perservere.

Like one dog, who suffered horrific injuries, but has now found a new and fitting purpose in life after surviving the ordeal.

Five months ago, a 7-year-old lab mix named Romee was brought to Cincinnati’s Anderson Hills Animal Care Hospital in shocking condition: he had been severely burned, apparently at the hands of his owner.

“What I saw from the photos when he first came into our view — what are the most shocking things I’ve ever seen,” Ray Anderson of Cincinnati Animal CARE told WKRC. “It looked like he had been burned.”

Since then, Romee has been making a steady recovery, and has undergone 50 medical procedures. While he lost an eye and still suffers scars, he has come very far from his original “shocking” state.

While no dog should have to suffer what Romee went through, this story has a happy ending.

For one, it seems justice was served: WKRC reports that while Romee’s owner denied involvement in his burning, she has since been convicted of animal cruelty and was made to pay $15,000 in medical bills.

The other good news is that Romee, who now lives in Cleveland, now has a very special job — one that he’s uniquely suited for.

“He’s going to be a therapy dog for children in burn units,” Corcoran said. “Since he’s obviously been in the burn unit himself, I think kids will get really excited when they’re going through something really tough.”

What great news — we know Romee, after surviving and healing from his own traumatic burns, will help inspire and comfort other victims.