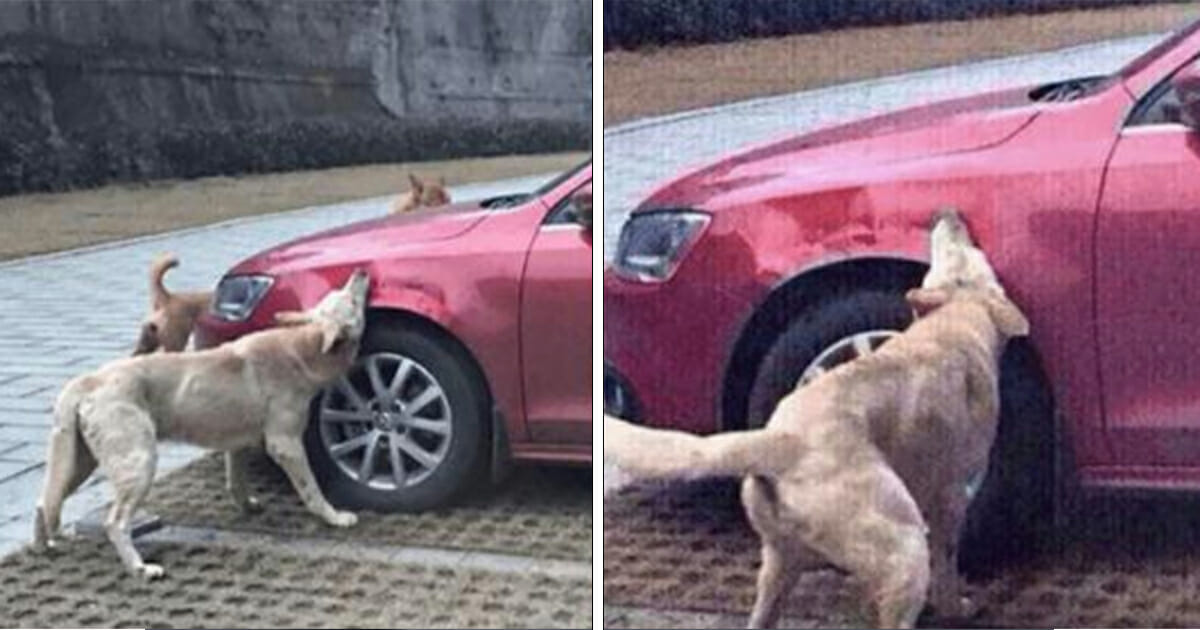 People abusing or mistreating animals is, sadly, something we’ve become accustomed to hearing and reading about.

For reasons beyond my contemplation, some people find it acceptable to neglect and sometimes even physically torture the animals we share this planet with. Some do it to make themselves feel powerful, some do it simply because they draw joy from seeing another living, breathing thing in distress.

Whatever the reasons, the plain fact of the matter is that not enough of the offenders are caught and punished. Which is what makes it extra satisfying when Lady Karma intervenes and decides to pay back those who have wrong innocent animals.

In this particular case, a man in China pulled up to his regular parking spot, only to find there was a stray dog in it. Rather than attempt to move the dog without force, the man got out and kicked it.

He got his parking spot in the end, as well as a great deal of justice …

According to reports, the stray dog returned a little later on with a pack of his friends. They immediately set to attacking the man’s car, and his neighbor was able to film the whole thing on video.

It’s believed the man kicked the dog outside of his home in Chongqing, this instead of simply honking his horn or shooing the dog away.

That’s right, where he might have simply taken a few moments to calmly let the dog know it wasn’t allowed to be there, he physically harmed it.

Well, violence begets violence, as they say. No sooner had the man left his car and headed home, the dog returned with his buddies and paid the man back in kind.

The dogs apparently chewed on the frame of the car, as well as the windshield wipers and, well, just about anything else they could get their jaws round.

Luckily for us, the man’s neighbor filmed the dog’s retribution on camera and uploaded the footage online. It’s every bit as brilliant as it sounds.

No one should ever get away with intentionally harming an innocent animal. We just hope this man has learned his lesson once and for all.

Share this article if you stand up for the animals of the world!