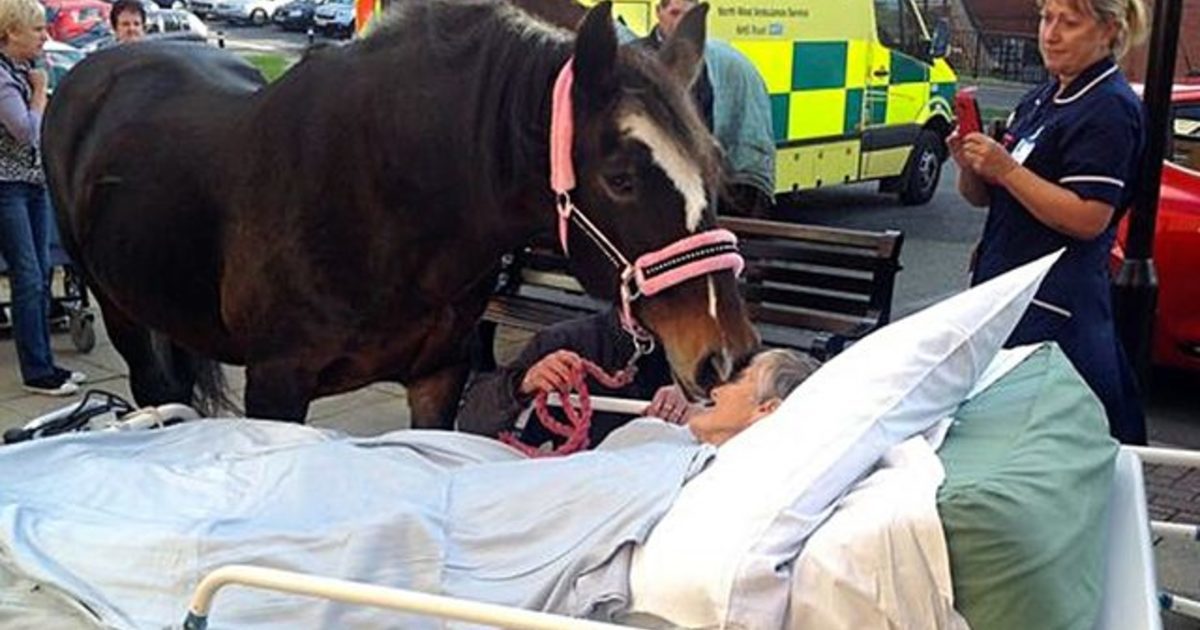 Most people who are in the final stages of life want to share their last days or hours on this planet with their loved ones.

Some also have special wishes, like going to a favorite spot or enjoying the sunset one last time.

Fortunately, some nurses and doctors go above and beyond in such situations.

In 2014, Sheila Marsh, 77, was dying of cancer and couldn’t speak properly due to her illness.

The hospital staff knew, however, that she had a final wish. Sheila wanted to say goodbye to her favorite horse, Bronwen.

Sheila Marsh started working at the Haydock Park Racecourse in Merseyside, England when she was 21 years old. Horses had always played an important role in her life, and she had formed an especially special bond with a horse named Bronwen.

Sheila took care of Bronwen from the time she was a little foal. They lived together for almost two decades, writes La Gran Epoca.

Unfortunately, 77-year-old Sheila was diagnosed with terminal cancer in 2014.

Lying on her death bed at the Royal Albert Edward Infirmary in Wigan, Sheila had one last wish: to meet her beloved Bronwen one last time.

When Sheila’s health deteriorated, her daughter Tina asked the hospital staff if they could grant her mother’s final wish.

So they put Sheila’s hospital bed into an ambulance and drove to a parking lot where Bronwen was waiting for her.

And when the horse saw her beloved caretaker, she went straight over to her.

“Sheila gently called to Bronwen and the horse bent down tenderly and kissed her on the cheek as they said their last goodbyes,” Nurse Gail Taylor told the BBC.

“I was crying my eyes out and all the nurses were crying, too. She took comfort out of it and it was a beautiful moment,” Tina’s daughter told the Manchester Evening News.

Sheila died peacefully the next morning.

Although this story is from 2014, it still moves us to tears. A big thank you to the hospital staff who organized this. You’re miracle workers!

Please share this article on Facebook if you also think that everyone deserves to have their last wish fulfilled.