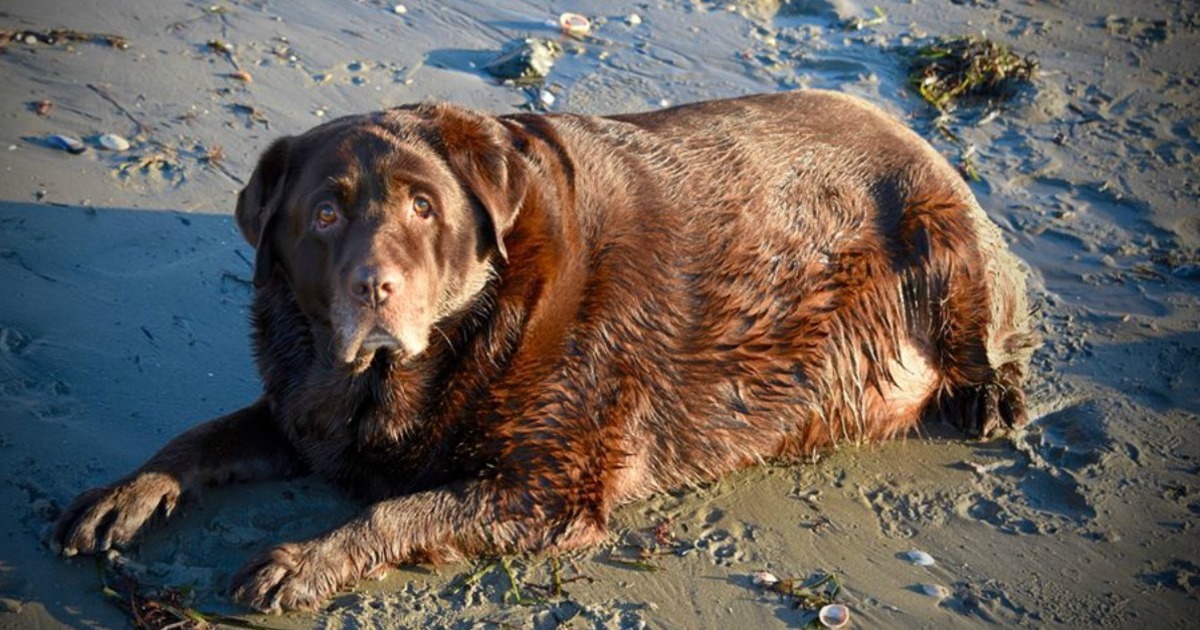 I’m the first to admit my dog is a little overweight — but she’s nothing compared to what a chocolate Lab named Shiloh used to weigh.

The wonderful eight-year-old dog weighed a whopping 146 pounds (66 kg) when he was adopted by Heidi Fiore and her family.

Heidi’s family had recently lost their previous Labrador and wanted to adopt a new dog.

“We lost Jasper about three months before we got Shiloh,” Heidi said. “I was not looking for another dog so soon after losing Jasper but I felt a connection to this Lab on Facebook.”

Heidi and her husband went to meet Shiloh the next day and it was love at first sight from both sides.

“We didn’t know how heavy he was until we met him. His personality won us over immediately, and I had a strong feeling that we could help him,” Heidi said.

Heidi wanted the newest member of her family to live a long and healthy life, so she set Shiloh on the path to losing weight.

In just 10 months, Shiloh lost 60 pounds (27 kg) and he looks better than ever! Scroll down and take a look for yourself.

Heidi Fiore and her family had recently lost their beloved Labrador and wanted to adopt another dog. And when Heidi saw a Facebook post about an overweight, chocolate Lab named Shiloh, she knew he was the dog for her family.

“We were in shock when we saw him, he looked like a bear, but he was so happy and sweet with love in his eyes,” Heidi told Little Things.

“We had never seen a dog so overweight,” Heidi said.

Shiloh weighed about twice as much as he should. An adult male Lab typically weighs between 65-80 pounds (29-36 kg).

Obviously, Shiloh had to go on a diet — and Heidi was happy to help!

Heidi surprised her three kids when she brought home Shiloh. He was waiting at home when the family’s two youngest children came home from school. They loved him right away and are helping him with his diet.

“They understand not to give him table scraps; we go on many hikes and walks on the beach or around town,” Heidi said.

The whole family started taking Shiloh on daily walks to help him lose weight. But it wasn’t always easy for the giant dog.

“When we first got him, he couldn’t even make it down the street without multiple breaks. He would plop down on the ground and not budge for anywhere from five to 30 minutes,” Heidi said.

Thankfully, Shiloh didn’t have any serious illnesses or other problems associated with obesity.

Although Shiloh was very overweight when Heidi adopted him, she doesn’t want to blame his former owner.

“They did the best they could but could no longer care for him when her husband became sick.”

After a keeping to a strict diet and exercise plan, the results began to show.

In just two months, Shiloh dropped 20 pounds (9 kg). It was noticeable — both on the outside and inside!

Heidi snapped these pictures to show how heavy Shiloh used to be. In the first six months, he made some impressive progress!

Now that he has lost weight, Shiloh can run longer distances and have fun with his family!

“With Shiloh, it was as simple as carefully limiting his food intake and regular exercise, which isn’t as easy as it sounds with a hungry Lab,” Heidi said.

“The huge difference is obviously in his energy level,” Heidi said.

When Shiloh was bigger, he was a lethargic dog. But now that he weighs a lot less, he can go everywhere with his family without worrying about needing to take a break.

“He loves people so much; we always stop to talk and everyone who meets him loves him. He immediately made lots of friends around town and had many supporters throughout his journey,” Heidi said.

These days, it seems like just about every other dog is overweight. Remember that overeating and under-exercising leads to an increased risk of disease and a reduced quality of life.

That’s why we were touched to see this family take in Shiloh and give him a better life!