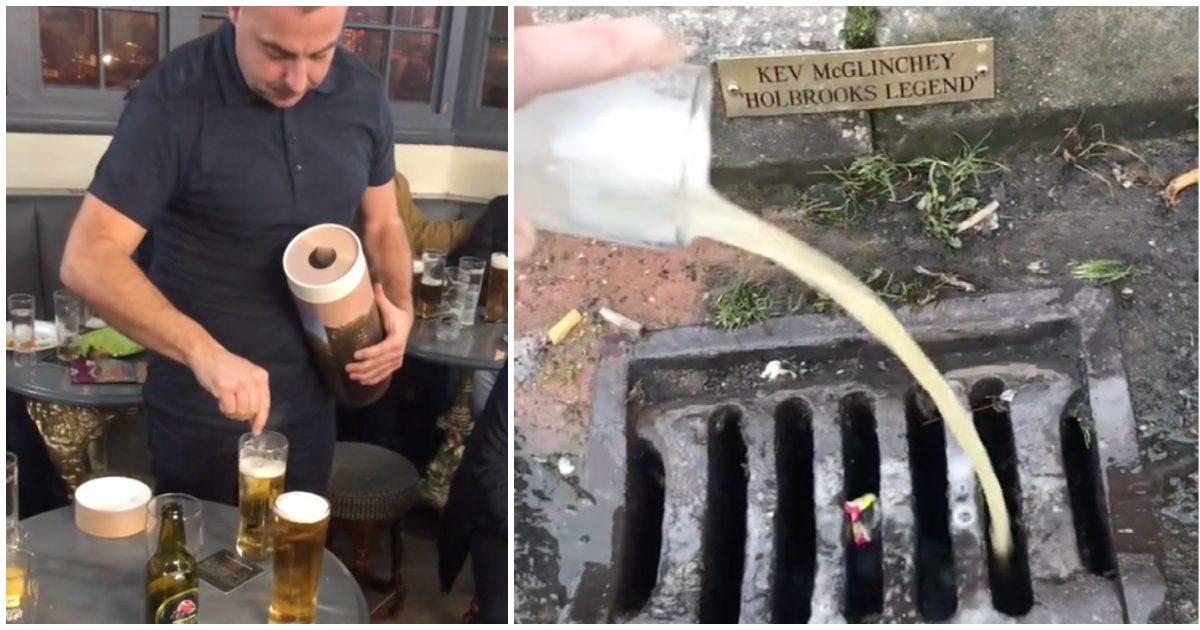 For many men, the local pub is an important part of life, the place where you spend a lot of your free time and home to some of the most fun moments of your life.

Some men dream of spending eternity at the pub — and for one man, that became a reality.

After Kevin McGlinchey, from Coventry, England, passed away at the age of 66, he left his family a very unusual final request regarding what to do with his remains.

In life, Kevin enjoyed nothing more than a pint at his favorite local inn, the Hollybush… and decided that the pub would be the most fitting resting place: he requested that his ashes be poured into a pint of beer, then poured down the drain, so he could “travel to all his locals through the drains underground.”

Amazingly, his family took this to heart and decided to obey his final wish, realizing there would be no more fitting place for their father to rest.

“He loved the Hollybush and would take a walk up there everyday,” Kevin’s daughter Cassidy said, according to LADbible.

She captured the ceremony on video, which reportedly took place in 2018 but recently went viral on TikTok. In it a family member picks up a scoop of Kevin’s ashes and mixes it into a beer, just like the late man dreamed of:

Later, with family and friends gathered outside, he lifts the glass one last time, and pours him into his final resting place:

It might sound strange, but for this family it was a fitting tribute to their dad and a way to get closure.

“My dad was 66 when he passed away and it was a very emotional time for us all and very hard to get our heads around,” Cassidy said.

“It was an amazing feeling giving my dad exactly what he had wished for when he died, and I would do it all over again.”

If that drain outside the pub doesn’t strike you as the most dignified resting place, a follow-up video by Cassidy shows that it has become something of a shrine to the late man. A plaque above the drain says “Kev McGlinchey, Holbrooks Legend.”

And, in addition to getting to visit all the local pubs from beyond the grave, Cassidy shows up and pours a beer out for her dad.

“We have been through so much as a family over the years and suffered so much heartache, it’s nice to have a smile knowing my dad is still causing a stir even from his drain,” Cassidy said.

It sounds unusual at first, but we can think of no better fate than drinking beers at pubs for all eternity. Time to update our wills.

Raise a glass to this beer legend by sharing this story 🍺