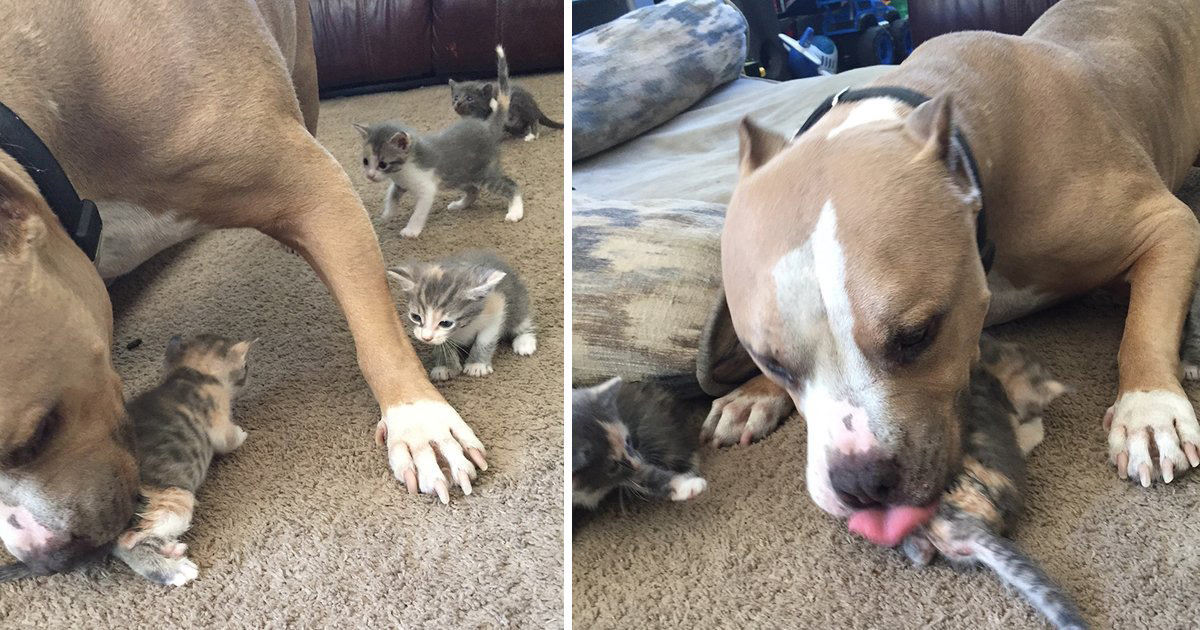 Meet Ozzy. He’s a pit bull who’s been a little frustrated over the past few years. That is, until his owners welcomed some new members into the family — and Ozzy got what he’s always wanted…

A litter of kittens to play with and look after!

Ozzy’s family, who lives in southern California, adopted him three years ago. He’s always gotten a lot of love from his mom and mom and dad and their three children — but not from their cat, Norm.

Ozzy has tried to be friends with Norm ever since he arrived. But Norm simply doesn’t want to have anything to do with him.

It’s said, since Ozzy is so outgoing and loving. But you don’t need to feel bad for Ozzy anymore. Because he recently got some new playmates!

In June, Ozzy’s family welcomed a new member — a cat named Winnie. She had been living on the street and Ozzy’s parents couldn’t bear seeing her homeless and alone, so they adopted her.

Two months later, Winnie gave birth to five kittens. For Ozzy, it was like a dream come true, and he seemed to take his new role as an uncle quite seriously.

Whenever Ozzy’s hears the little kittens crying, he rushes to their side to make sure they’re okay, and it’s clearly affected his mood.

“Ever since we’ve allowed Oz to interact with the kittens, he’s been so happy,” his mom tells The Dodo.

Winnie likes Ozzy, too. She likes to rub up against him, which the family thinks is her way of showing her gratitude for helping with the kittens.

The biggest issue now is what will happen after the kittens are adopted by new families. Four of the kittens will have new loving homes to go to, while Winnie and Troublemaker, one of the kittens, will stay.

Ozzy’s mom says that he’s never stopped giving love. And it seems that now, he’s getting more in return than ever.