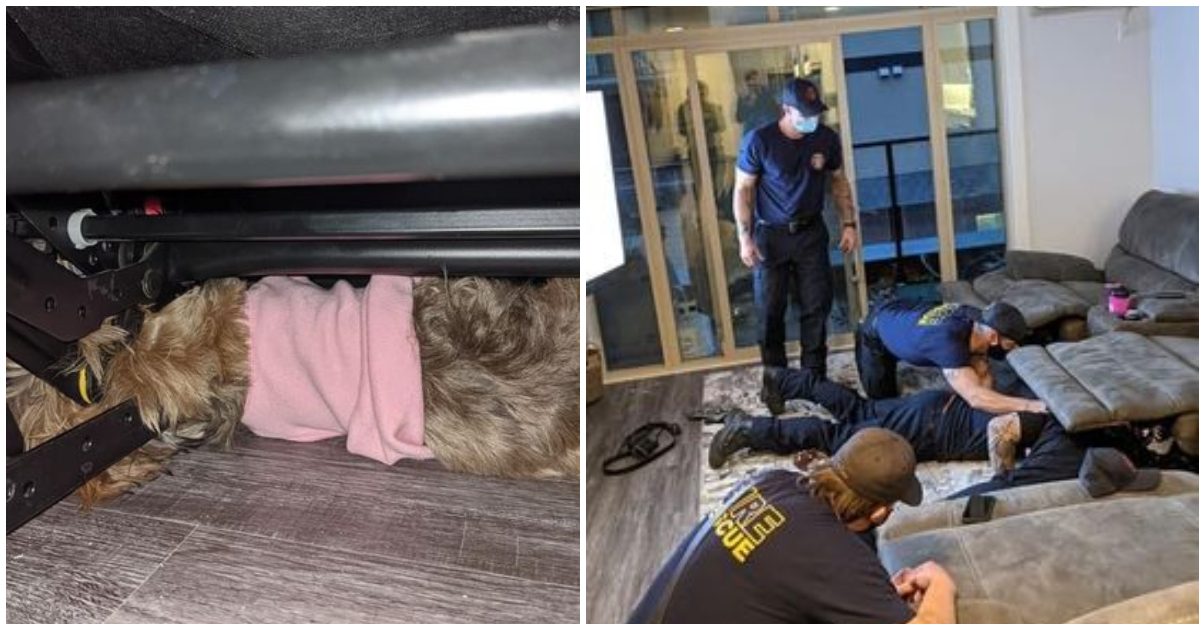 Firefighters don’t just help people in need, they help animals, too, whenever they’re in danger. Far from the stereotypical “saving a cat stuck in a tree,” firefighters can be relied on to get our pets out of some tricky situations.

Like one rescue team, who came to the rescue of a dog trapped inside a couch.

The Kamloops Fire Rescue, in British Columbia, Canada, got a very unexpected call last week about a dog named Bean, who was stuck in a very uncomfortable situation.

“My dog Bean managed to get her neck trapped underneath and between the reclining framework of our couch,” Bean’s owner wrote. “She was trapped… and I couldn’t move the couch without hurting her.”

The little dog was no doubt scared and unable to move, and her family didn’t know what they could do without possibly harming her.

So, they called the Kamloops Fire Rescue, who knew just what to do. They began to carefully dismantle the couch.

“They were really calm and really cared about Bean’s safety,” Bean’s owner said.

With hard work and patience, the crew was able to free Bean, who emerged from the couch safe and sound.

And it sounds like they were even able to reconstruct the family sofa:

“We are happy to report that Bean, her owners, and the couch are all doing just fine today,” the Kamloops Fire Rescue wrote.

It’s the kind of situation that could happen to anyone: we all have couches at home, and many of us have curious pets who like to get themselves into strange places.

It’s good to know that, in a situation like this, the fire department is there to help dismantle a couch.

“We are very thankful for a great crew in this city,” Bean’s owner wrote.

We’re so glad Bean is safe! Thank you to this rescue team for looking out for this dog and getting her to safety!

Thank the Kamloops Fire Rescue by sharing this story!