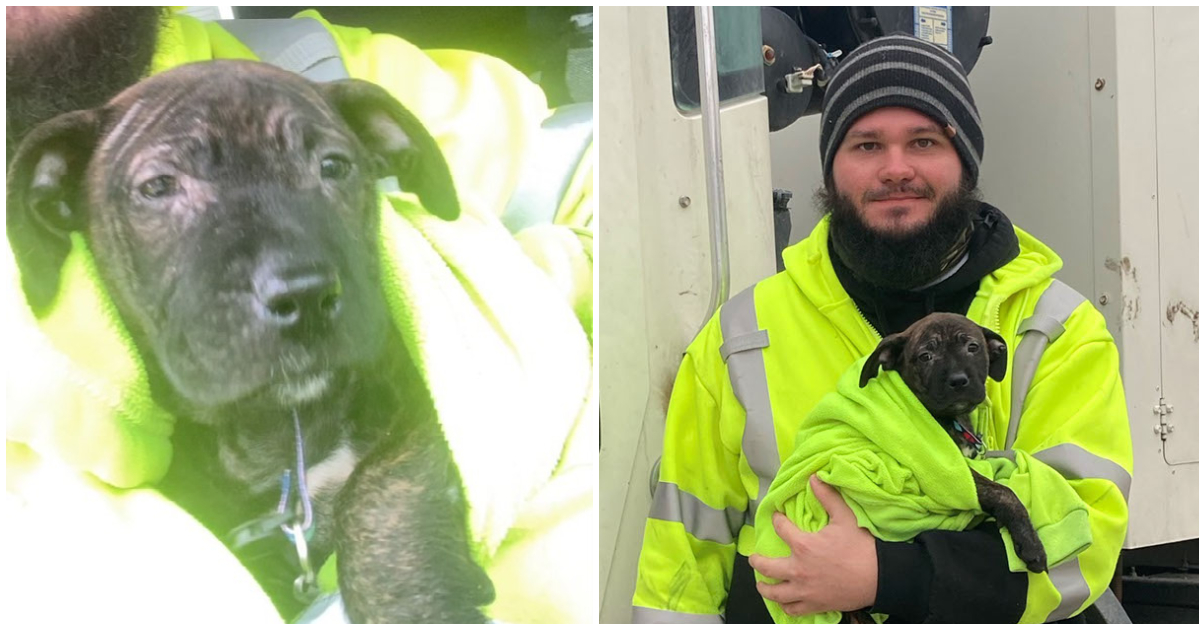 It’s heartbreaking how many people treat their pets literally like garbage. We’ve seen so many sad cases of dogs left out with the trash, in dumpsters or out on the curb.

But one man’s trash is another man’s treasure, as they say, and luckily one observant garbage man was able to find a discarded dog before it was too late… and found a new friend, too.

Aaron Kinsel is a truck driver for Rumpke Waste & Recycling. He was on his normal route in Colerain Township, Ohio on Wednesday morning, when he noticed something unusual.

There was a discarded backpack along the road, and Aaron could see that there was something moving inside. He stopped to take a look, and there was a 10-week-old boxer mix puppy inside.

Aaron immediately fell for the puppy. He took her into his truck and brought her to safety.

The dog was suffering from dehydration and a broken leg, according to a press release from the company. Aaron took her to a veterinarian to get her the help she needed.

He was also growing attached to the dog. He told WLWT that the dog “looked relieved” to see him when he rescued her, and in return he felt an instant bond.

“I felt like I was meant to find her,” Aaron said in a press release.

He named the dog Tipper, after part of the garbage truck that helps pick up trash containers, a part Rumpke calls a “driver’s helper.”

According to WLWT, Tipper was taken to the vet and diagnosed with a fractured hip and knee. Sadly, her leg will have to be amputated, the best option in her case: since she’s still a pup, she can adapt to three legs, while a surgery could cause more problems.

But there’s good news: for one, Rumpke has offered to cover all of Tipper’s medical expenses. And even better, she already has someone interested in adopting: Aaron.

The driver knew it was meant to be after finding her, and wants to make it official: “I’m gonna try my best to adopt it, get it in the family,” he told WLWT.

The person who threw Tipper away in the first place still hasn’t been identified, but police are investigating the incident.

“It was kind of shocking to think someone would just throw away a dog like that,” Aaron said. “But in today’s world, you never know what’s going to happen.”

We’re so glad Aaron was there to save this poor dog. It’s so sad he was thrown away like this, but at least he’s in good hands now.