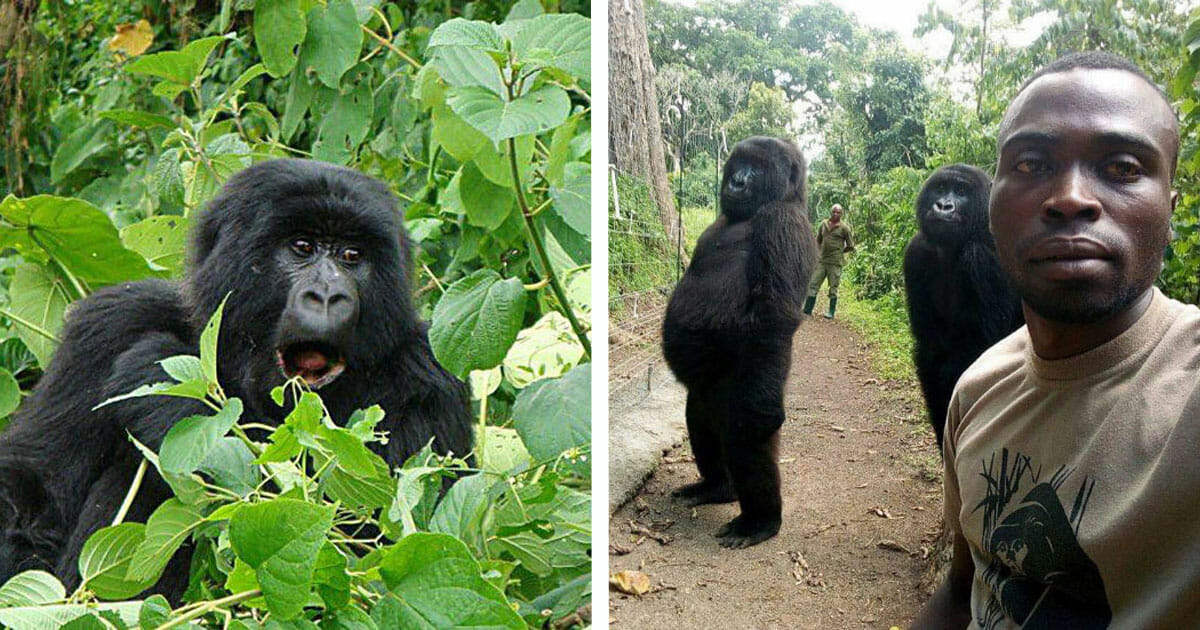 Remember in 2011 when a monkey took a selfie and the internet couldn’t get enough of it? Well, prepare yourselves because there’s a new animal photo to obsess over, and this time it involves two orphaned gorillas.

Mathieu Shamavu, a ranger at Virunga National Park, Democratic Republic of Congo, captured the now viral moment, and it’s one of those photos that you just have to see to believe.

Shamavu, who appears with two female gorillas and a fellow ranger took the photo one day while at work. Once the eerily humanlike photo made its way online, it went viral.

How many times have you seen gorillas pose for the camera like a couple of 20-somethings before a night out?

According to BBC Newsday, the mountain gorillas have lived at the park since their mothers were killed when they were just infants in 2007.

Innocent Mburanumwe, the deputy director of Virunga National Park, said that since the gorillas, named Ndakazi and Ndeze, have grown up around humans–rangers work to protect the gorillas from poachers–they sometimes imitate them.

Although he adds that it “doesn’t happen normally.”

“I was very surprised to see it…so it’s very funny,” Mburanumwe said. “It’s very curious to see how a gorilla can imitate a human and stand up.”

Not only are the gorillas capable of imitating humans in photos–this isn’t the first time one of them has posed for a photo–but the critically endangered animals also enjoy spending time with their caretakers.

After Ndakazi and Ndeze drew a lot of attention to the park’s social media accounts, Virunga National Park urged viewers to share their other posts to get the word out about their sanctuary. They also asked for donations, which could benefit not only the gorillas, but the rangers who risk their lives every day.

While Virunga National Park consistently shares adorable photos of their rangers and mountain gorillas hanging out, it’s important to know that you should never attempt to recreate any of their photos with wildlife.

If you can’t stop laughing at the gorillas’ posing in this park ranger’s selfie, share this article on Facebook and let your friends know.