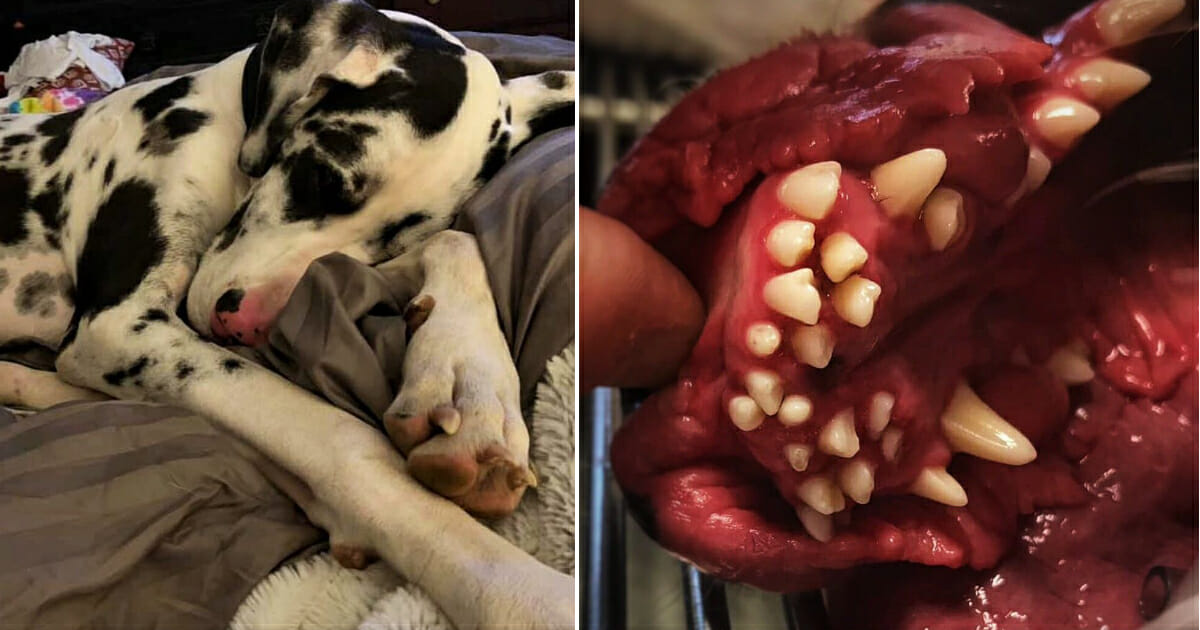 When mom of three Aurora Rutledge adopted a dog, she had no idea that he was so special!

The 31-year-old brought home a Great Dane named Loki, and she instantly fell in love with him. But when she took him to a veterinarian to have a routine check up, the vet discovered something quite out of the ordinary.

As he peered into Loki’s mouth, he saw that he had a whopping 70 teeth. The normal amount of teeth for his breed at his age and size is about 42.

The vet quickly removed 21 of those teeth, but Loki still has more than the average amount. He says that the condition Loki has is hyperdontia. But even so, this is one of the worse cases.

Aurora paid for $770 worth of extractions.

She said, “I had taken him to our local vet as a routine check up since he was a new rescue and mentioned to the doctor that the people we got him from mentioned that he may have retained baby teeth. “Loki is a giant puppy and is very energetic – so I hadn’t had a chance to look inside his mouth myself beforehand.”

“It was something that massively shocked us, but we’re just so glad that he is home and recovering now,” she added.

But why is Loki’s condition so bad? It may have been the result of poor breeding.

“The vet cannot rule out that he may have this as a result of poor breeding – so the rescue we got him from is working hard to track down his breeder to hopefully stop something as painful as this happening again.”

“It was something that massively shocked us, but we’re just so glad that he is home and recovering now.”

The Great Dane is now eating soft food while he is recovering.

We hope that Loki feels better soon! It’s quite surprising that a case of hyperdontia can get as bad as this, but what matters is that his mouth heals so that he can go back to being an energetic puppy. Please share to wish him a speedy recovery!