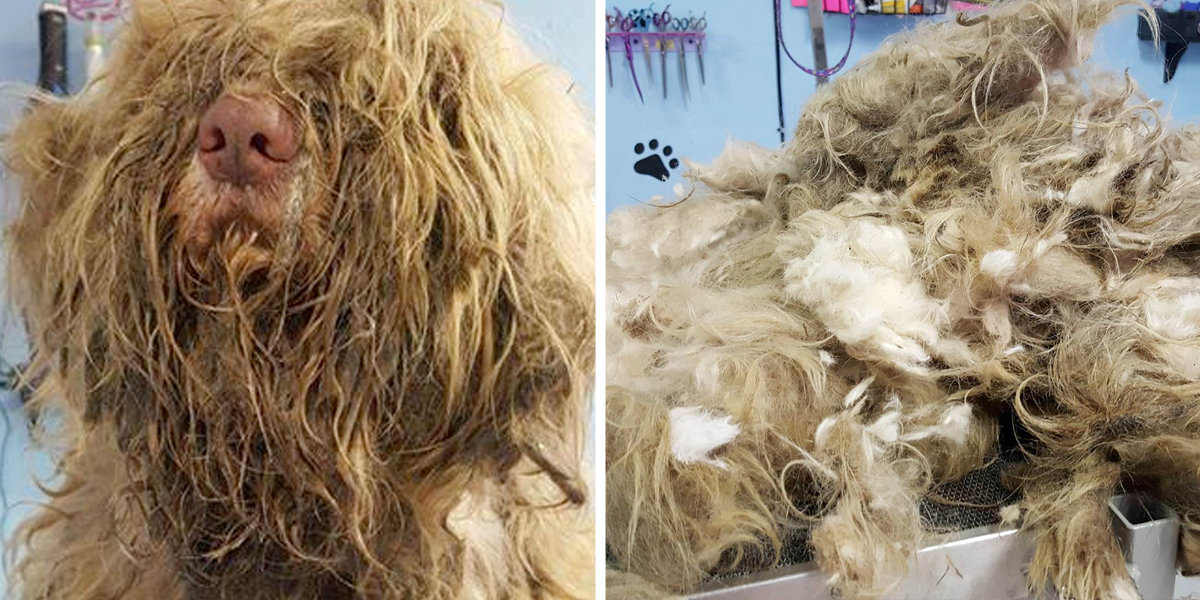 Nobody knows for sure how dog Lucky ended up stranded in the middle of a busy highway by himself.

But based on his appearance, one thing was for sure: the dog was unwell.

When Lucky was found on the Florida road, he was completely wrapped in a shocking mass of fur, a clear hint of his sad past.

But thanks to a heartwarming rescue and complete transformation, Lucky is now much better.

Kari Falla owns and operates BGE Grooming, a salon for pets in Seminole County. When she’s not serving her clients’ dogs, Kari usually devotes her time to grooming abandoned animals who are in great need of makeovers, giving them a better chance to later be adopted.

Kari came across a friend’s post on Facebook about a poor dog that had been discovered alone in the middle of a highway. It was in terrible condition, and Kari immediately felt that she had to help — even if it meant she needed to head straight to her grooming clinic in the middle of the night.

“As soon as I saw the post I knew the dog needed help IMMEDIATELY,” Kari told The Dodo. “I contacted the finder of the dog and I told them to meet me at my salon at midnight that very night and I would groom him for free.”

For Kari, who saw a lot of neglected dogs, Lucky was an extreme case.

“It was seriously the most disturbing situation I’ve ever seen in my life,” she said. “He smelled like death. He could not walk. He could not poop. His whole body was like a mummified cast. He was infested with fleas. He had a very long leash that looked like an outside leash embedded in his skin from the mats.” Facebook/BGEGroomingStill, she refused to consider it a hopeless case.

Over the next three hours, Kari began to free the dog from its hairy prison. Slowly but surely, the dog’s true self began to emerge. By 3:00 am, the transformation was complete — but it had been a long, challenging process. Surprisingly, Lucky had remained calm during the whole thing, he didn’t complain once.

Afterwards, Lucky got a nice and warm bath — possibly the first one of his life. After his bath, the dog was brought to a veterinarian who found that Lucky was both blind and deaf. He had no microchip, so tracing his potential owner was difficult.

But after all, he is now in good hands.

It’s only been a few days since Lucky was saved, but his life is infinitely better than before. A foster family is currently taking care of him and Lucky is reportedly already much happier and feeling more secure.

When the time is right, Lucky will be put up for adoption, at which time he will hopefully receive eternal love and security in a home and start a promising new life. “We love animals so much and feel extremely passionate about helping others in need. We groom all rescue and shelter dogs for free and don’t even think twice about it,” says Kari. “Our salon motto is a little kindness can go a long way, and in this case, it saved a life. There is nothing more rewarding than seeing a dog wag its tail in happiness after being groomed. A haircut can make ALL the difference in the world. The dog that once came in, sad, depressed, matted, long neglected nails, dirty ears, leaves our salon, jumping up and down, tail wagging, feeling happy and confident about themselves.”

Thank you Kari for everything that you do!

Watch Lucky’s gruelling grooming process in the video below:

If you agree = that Kari and her salon deserve all the recognition in the world for their work, make sure to share Lucky’s story, so that more people get the chance to read about this wonderful animal friend!