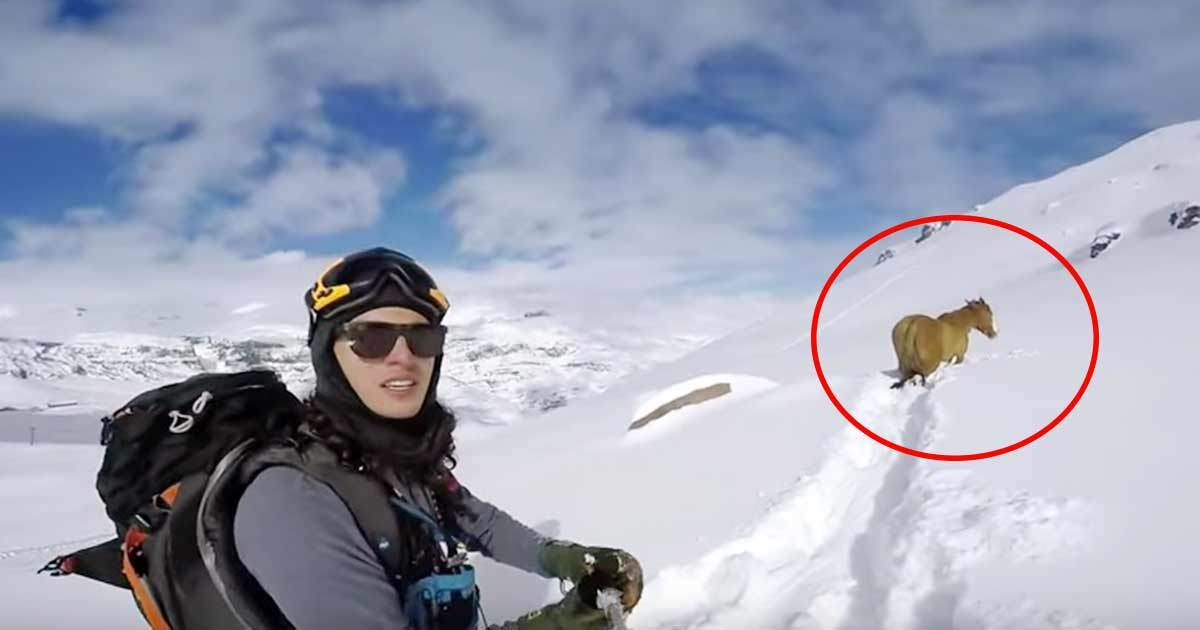 Two young snowboarders couldn’t believe their eyes when they encountered a lone horse deep in the Andes.

But as soon as they were over their surprise, they knew it was time for swift action. And it’s thanks to them that the horse’s life took a dramatic turn for the better.

Rafael Pease and his friend were looking forward to a day of snowboarding on the slopes of the Chilean Andes.

It was Rafael’s 21st birthday. And the day would certainly be everything but ordinary.

As they began their beloved hobby, they noticed something resembling a large rock in the distance. But as they got closer they realized that it was in fact a stranded horse that was in dire need of help.

They quickly began digging the horse out with their little shovels.

“The horse was gonna die unless someone did something,” one of the young men says in this video they uploaded to YouTube.

They gave the horse some of the food they had with them, and began trying to get it off the mountain.

They managed to dig out the stranded animal, tying a rope around its neck and leading it out through a path they shovelled up.

Slowly but surely, they managed to lead the horse down the mountain.

It later turned out that the horse’s owner had been frantic with worry after his horse had gone missing for several days. The horse had escaped, gotten lost, and gotten stuck in the mountain.

After four lonely days on the mountain, horse and owner were finally reunited, thanks to the snowboarders’ efforts.

I don’t even want to imagine what would have happened had the two young men not discovered this horse. The poor animal was in bad shape and would unlikely have survived much longer had they not come across it.

“I have been through a lot in life, and through it all I have realized that it’s well worth it to watch out for others — whether they are human or not. And that’s what me and my riding partner did (…) Hopefully this inspires you to get out there and not only live your life to the fullest, but to help others do the same,” Rafael Pease writes on his blog.

Watch the brave rescue below:

Share this exceptional story with all your horse-loving friends!