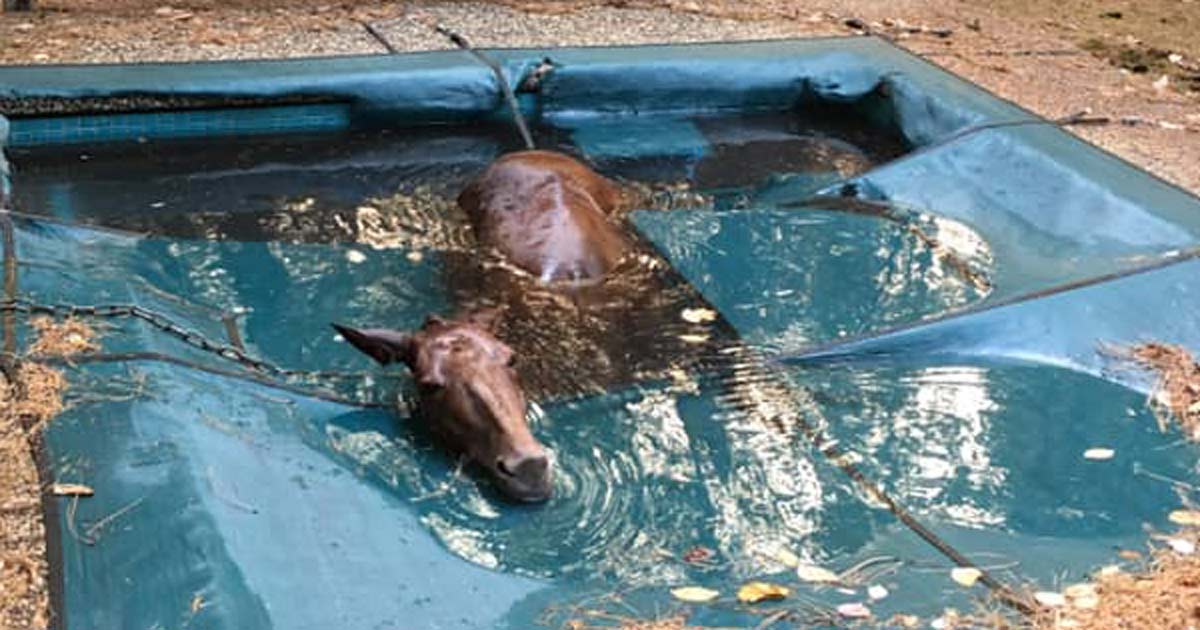 The deadly wildfires continue to rage in California. Over a quarter of a million people have been forced to flee their homes and the most recent count has the death toll at 58.

At this most tragic of times, though, it’s not just humans suffering, but countless animals as well.

Today, an image has gone viral of a horse who was trapped in a pool after attempting to flee the blaze.

Since the fire’s beginning, several groups have been formed on Facebook in a bid to reunite animals with their owners. From one of them is spreading the heartbreaking story of a horse who found itself trapped by the deadliest wildfire the state of California has ever seen.

Jeff Hill, former resident of the now-ruinous town of Paradise, was driving around in a bid to see if he could find anyone in need of help. He was never prepared for what he would come across.

First he spotted the cover for a pool that had belonged to one of his neighbors. Within that, though, he noticed the body of a horse. Upon closer inspection he found the animal wasn’t dead, merely completely exhausted. So tired, in fact, that it made no move to get up.

“As I was checking to see if someone’s house was standing we stumbled upon this girl who had given up and had the look of defeat in her eyes. There’s no telling how long she was there but she was shivering uncontrollably and ultimately lost her fight,” Jeff wrote on his Facebook page.

Jeff pulled back the cover so that the horse could win free, and then led her to the steps of the pool so that she could get out.

As if she understood what Jeff had done for her, the horse stayed for a few minutes, before getting up and walking away.

“She got out, shook off, loved on us for a few minutes as a thank you and walked off assuring us that she was ok ❤” Jeff wrote.

It looks as though the horse had sought shelter from the heat in the pool’s embrace, only to become trapped by the cover.

That said, there can be no mistaking the fact that the pool probably saved her life. I don’t want to think what might have happened if Jeff hadn’t been around to set her free.

We currently have no information on what happened to the horse following her release, but we hope and pray she’s found her way to an organization who will help her.

In the midst of misery and disaster, it’s stories such as these that give us continued hope.

As I result, it’s important that we pay tribute to Jeff for his great efforts in saving this horse. It’s our hope that the fires can be controlled before too long, and that no more people or animals lose their lives.

Share this article with your friends on Facebook to show your support for everyone affected by the California wildfires.