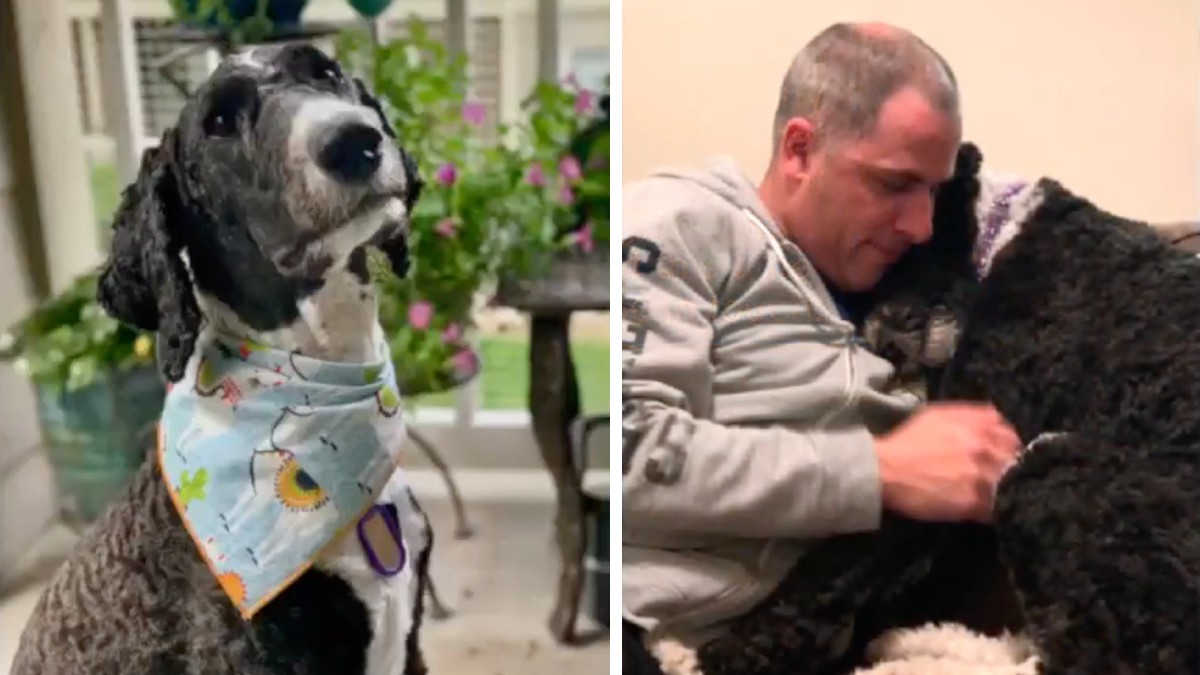 Before Brittani Marinsky of Overland Park, Kansas died in August 2020 of gastric cancer, she made her husband, Paul Marinsky, promise he would keep her service dog, Tootsie.

“On Aug. 10, the day Brittani received the news that her cancer was terminal and made the decision to discontinue treatment, I called the CEO and founder of Starfleet,” he told FOX4. “I asked her, ‘What do I need to do to keep Tootsie?’”

He had no idea it would be so difficult to keep the dog their family had come to love over the last two years.

Brittani had suffered from multiple chronic illnesses and wanted a service dog to help her, so she did her research and found an organization in Maryland that would help her.

Starfleet Service Dogs, Inc. paired her with a 1-year-old Sheepadoodle named Tootsie, and not only did she help Brittani, but the dog quickly became a part of their family.

Brittani paid the company $141 a month and spent thousands of dollars to train Tootsie.

“I absolutely love Tootsie,” Marinsky said. “And it was my wife’s dying wish that I keep Tootsie. She told me to do what I can to make sure that happens.”

In August 2020, Brittani received news that her cancer had returned. Upon learning of his wife’s tragic news, Marinsky contacted Starfleet and inquired what he would need to do in order to keep Tootsie after he wife passed.

The CEO informed Marinsky that Tootsie was meant to be a service dog, however “there are options available, and we’ll have to talk about them.”

Marinsky offered to buy the dog, and at first it seemed like that was a feasible option.

In mid-October, nearly two months after his wife died, Marinsky told Starfleet he would take over all the costs of taking care of Tootsie and he was prepared to “pay up to $5,000 or $6,000 to ensure she stays with me.”

He wasn’t promised anything, but the CEO said the company was willing to work with him.

However, a short time later he received a message from Starfleet stating that someone would come to his home to retrieve Tootsie.

“Starfleet said they’d send someone out to pick her up on December 5 or 12, whichever works for you,” Marinsky said.

But in late November when Marinsky took Tootsie to a vet appointment, someone from the organization was there to pick her up.

Now Marinsky is fighting to get his late wife’s dog back.

“The question is who owns Tootsie? Which, quite clearly, the answer is Mr. Marinsky,” Katie Barnett, his attorney, said.

Multiple lawsuits have been filed in multiple states, however Starfleet remains firm that the couple did not adopt Tootsie and therefore must remain property of the organization.

Barnett argued that Starfleet’s contracts were ambiguous regarding the ownership of the dog.

One form stated that Starfleet was “willing to accept responsibility for graduated service dogs in the event of a graduate’s death,” while another form said the dog “must be returned” after the handler dies.

The fight isn’t over as Marinsky prepares to go to court in Maryland, where Starfleet in based.

“I’m in this for the long haul,” he said. “This is going to continue until I get her back. She is the last living memory I have of my wife.”

“I like to think she’d be proud of me for taking up this fight, not only for Tootsie, but for her,” he said.

A GoFundMe has been set up for help Marinsky pay for legal fees. So far more than $1,000 has been raised.

Did you know an organization can take a service dog back when the handler dies? I did not know that, and I think that’s horrible!