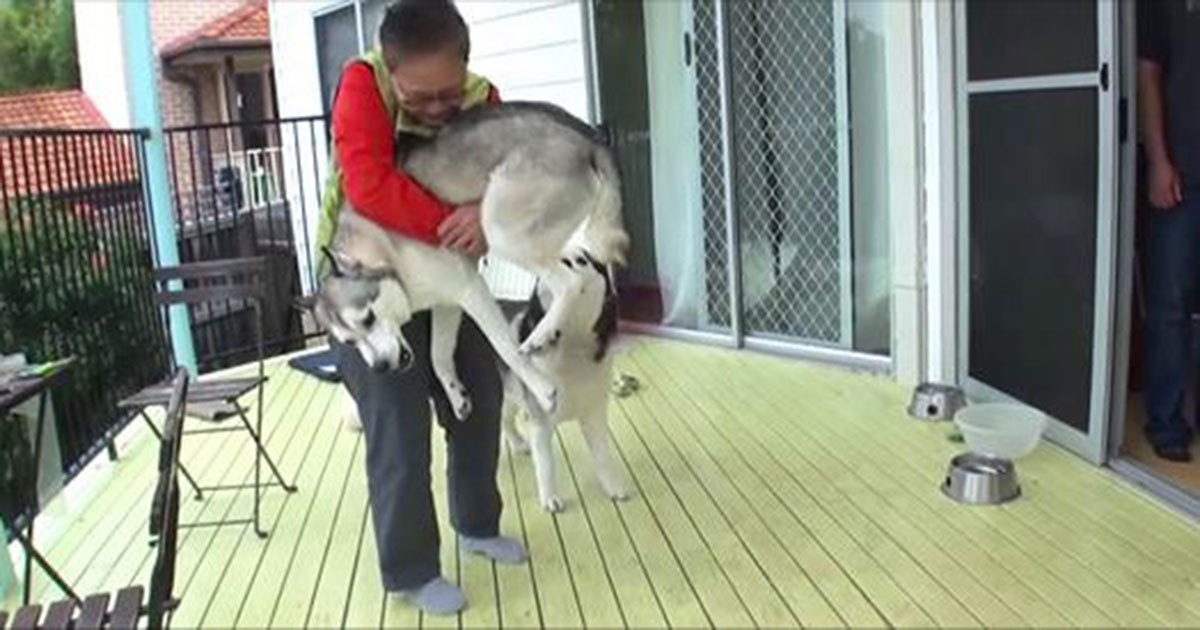 Raising a puppy requires a lot of time, patience and effort.

When you work full-time, it can therefore be tricky to manage all the time and sometimes, you’re forced to ask for help from family and friends. If you’re lucky to have retired parents, then they’re often a great solution for when you can’t be home for your puppy every day.

This was the case for little husky Wolfie and his master Joe, who was soon forced to ask his mother to help care for the little puppy. And she did so lovingly, through thick and thin.

During their time together, she played with Wolfie, took him for his walks and fed him plentifully.

The two spent a lot of time together and both thoroughly enjoyed each other’s company. In many ways Wolfie saw her as his own mother.

But after a few months, Joe’s mother returned to her native Korea. In the following two years that she was away Wolfie became more independent, growing into a young, beautiful husky and playing with the other dogs in the house.

Because when Joe’s mother came for a visit, Wolfie immediately knew her – and it doesn’t take long before he shows her just how much he’d missed her!

When Wolfie was a just a puppy, his owner, Joe, could not always take care of him.

For some time, then, his mother hosted little Wolfie at her home, taking excellent care of him day in and day out.

Joe’s mother and Wolfie quickly became good friends and a deep bond grew between them. She was the person who was most there for him during his first, vulnerable few months.

There was never any trouble, she was always happy to have Wolfie in her life.

Eventually, Joe’s mother was forced to say goodbye as she was scheduled to return to Korea. At that time, Wolfie was just 1-year-old.

But two years later, she returned to the US for a visit… and Wolfie proved he’d missed her even more than she expected.

Watch their moving reunion below:

This beautiful video just made my day! Share this loving reunion with someone to bring a smile to their face, too! 🙂