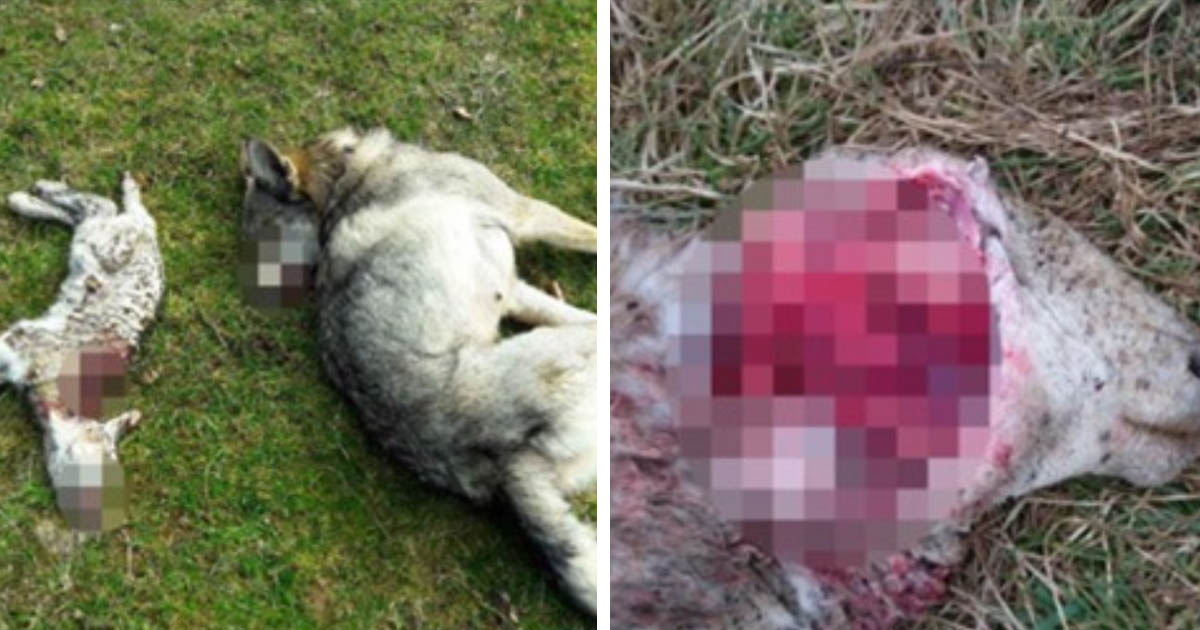 Shocking images have been released of a dog shot dead after he went on a “killing rampage” mauling to death sheep and a lamb in a farmer’s field.

It happened in the Cotswalds, England, after a farmer found at least two adult sheep and a lamb dead after being mauled to death.

Police have released the graphic photos to warn other dog owners to keep their dogs on leashes, especially right now as it’s lambing season.

Gloucestershire Constabulary’s rural crime team shared the distressing photos on their Twitter account to remind the public that ‘livestock worrying’ is against the law.

They wrote: “Is this upsetting and offensive? Probably, but this is what happened. The Husky was unfortunately shot whilst on a killing rampage.

Sheep worrying is an offence in the U.K. and includes attacking or chasing sheep and, in some circumstances, farmers are legally entitled to shoot dogs if they are endangering their sheep.

The image shows the loose husky dead on the ground next to a small, blood-stained lamb that had been mauled to death.

Other photos show at least two other adult sheep were dead and covered in blood.

It happened after the husky’s dog owner decided to let the husky off his leash in the farmer’s field.

Following a similar case in Macclesfield last year Sergeant Rob Simpson, from the Cheshire Police Rural Crime Team, said: “The term, worrying livestock, does the severity of the offence no favors.

“Essentially no harm or death has to occur to any of the livestock, as your dog simply chasing them is enough. Any time a dog is left unattended is simply not acceptable; it is so important that you make every effort to prevent this.

“No farmer likes the prospect of shooting a dog, let alone actually doing it. Many are dog owners themselves, but it’s written into law that they can protect their livestock,” he said in December 2020.

“There is only one person who can prevent this kind of incident from happening – the dog’s owner.”

I’m sure it was very distressing for the farmer to have shoot a dog in order to protect his livestock and my heart goes out to both the farmer and the dog’s owner.

Please share to warn other dog owners to keep their dogs secure on leashes if they are around livestock.