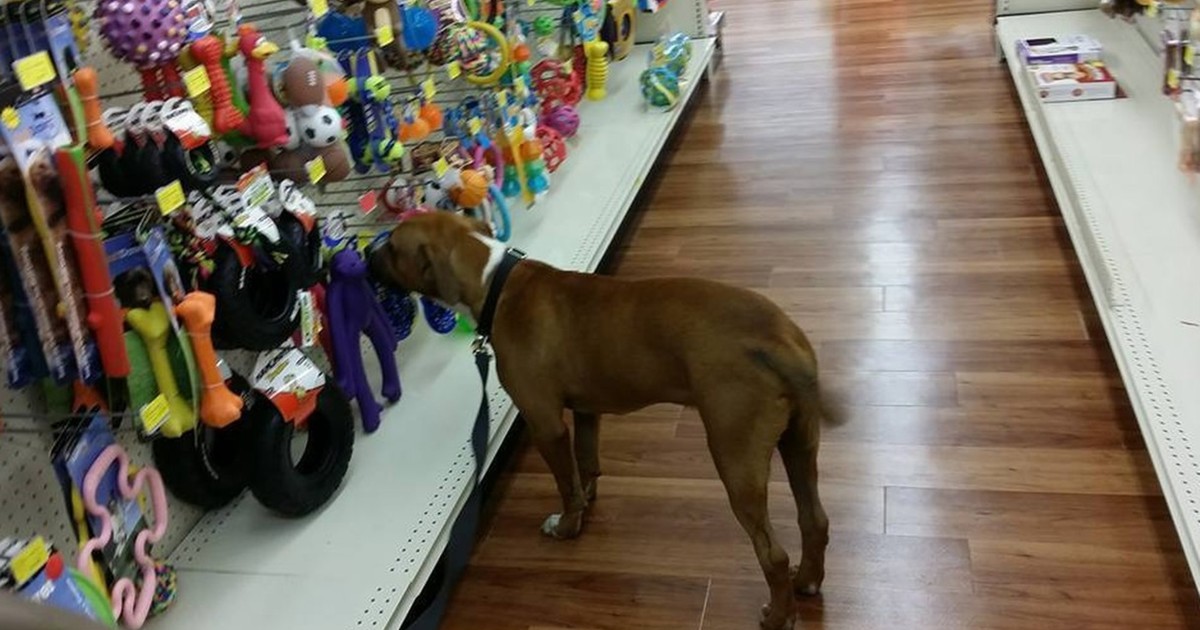 Kona’s life has completely turned around.

The sweet young pit bull was in a pet store for the very first time and he even got to pick out his very first toy.

But that would’ve been unthinkable last fall, when he was being prepped to be a fight dog at an illegal slaughterhouse in Palm Beach, Florida.

Fortunately, though Kona and nearly 1,000 other animals were rescued in the largest raid on an animal cruelty operation in U.S. history. And the lovable pit bull even found a special guardian angel.

Last October, authorities seized hundred of animals during raids on three illegal slaughterhouses in Palm Beach, Florida, and Kona was among them.

Richard Couto, founder of Animal Recovery Mission (ARM), was among the ARM staff who spent months working undercover to document the abuses at the slaughterhouses. While at one of them called, Rancho Garcia, he met Kona.

Couto told The Dodo, “He was going to be prepped for fighting. While we were undercover, all the ARM investigators really took a strong liking to him. He’s a really lovable, amazing, amazing dog. We were hoping to strike the property soon enough, while he was still alive.”

After the raid, six men were arrested for running the animal cruelty operations, while Kona and nearly a thousand other animals were brought to safety.

After spending several weeks under the care of an animal control center, Kona was ready to be adopted by a loving family. And naturally, Couto jumped at the chance.

“I rushed to animal control and personally adopted him,” he said.

To mark the occasion, Couto brought his new pup to a local pet store and had Kona pick out a toy so he could begin the next chapter of his life joyously.

Kona quickly acclimated to life with Couto on ARM’s sanctuary.

“He’s probably the most lovable dog that I’ve ever had. He won’t even bark,” said Couto. “There’s not a vicious bone in his body. On the farm, he was scared. You could see the fear on his face. Now he’s literally a new dog. He’s at our sanctuary, surrounded by people who love him.”

Thanks to Couto and the rest of the good people at ARM, Kona and hundreds of other animals, including cats, rabbits, ducks, swans, pigeons, and farm animals like horses, cattle, sheep, goats, and rams, will all be able to live out their days in peace. And Kona is even doing his part to protect the sanctuary’s animals.

“[Here is] Kona protecting the ducks and swans rescued from same property,” Couto said. “He thinks they’re his flock.”

Isn’t it wonderful to see Kona and all of the sanctuary’s other animals right where they should be? To support Animal Recovery Mission’s work, visit their website and share this article with all of the animal lovers in your life!