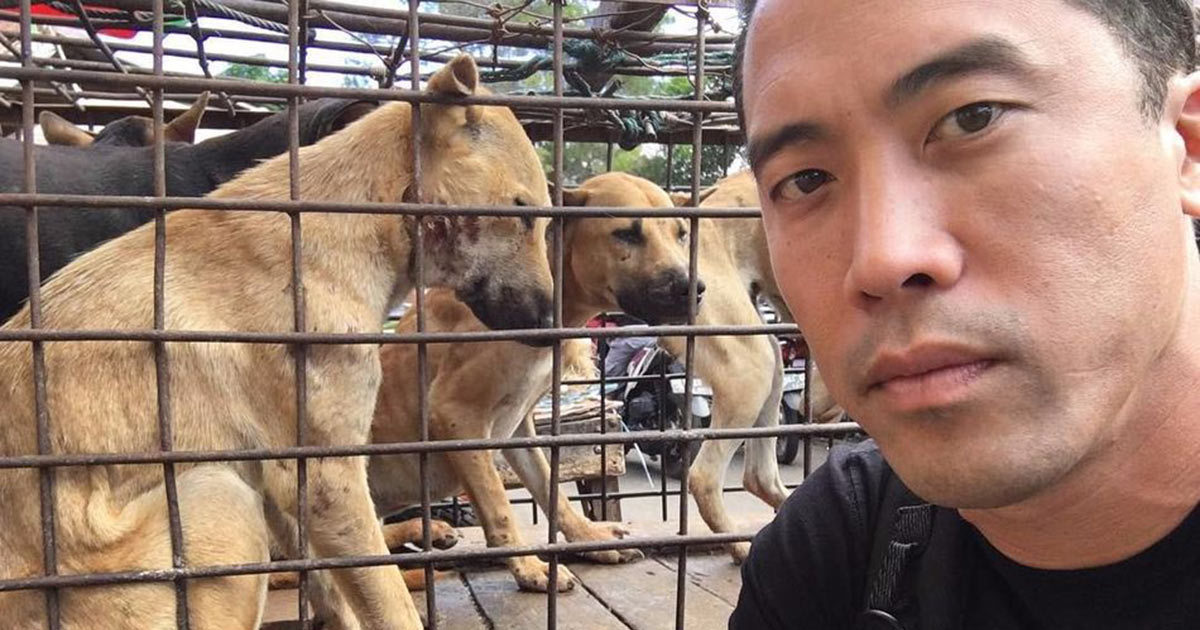 Last Tuesday marked the beginning of this year’s brutal dog meat festival in the Chinese city of Yulin. The festival lasts for 10 days, and thousands of dogs have already been brutally killed in connection with it. The festival has been in existence for 25 years and it evokes protest and disgust throughout the world. According to animal rights activists, 10,000 dogs a year are slaughtered using extremely painful methods. One of those who wants to stop the festival is American activist Marc Ching—and this year, he’s already rescued 1,000 dogs from being slaughtered.

This year’s protests against the dog meat festival are the most intense yet. Animal rights activists from the US, Australia, and Britain have called for an end to the event on social media, and hundreds of thousands of protesters signed petitions before the festival has even started. And even in China, the protests have increased.

Marc Ching and his associate Valarie Ianniello have saved 1,000 dogs this year. They began working long before the festival started, and have freed dogs from a total of six slaughterhouses.

Now, they’re documenting the festival and disseminating information to the rest of the world so that everyone can see the brutal treatment the dogs are exposed to.

Marc is posting pictures and films to his Facebook page, The Animal Hope & Wellness Foundation. One of these films really tore me apart. It’s of a small puppy writhing in a mud puddle.

“They burned her mother alive. And when they cut and threw out her insides—there was life. Nothing is more important then a chance. Even if I have to sacrifice what I came to sacrifice. She is alive, and she deserves a life amongst the living. I am on the way to the market for supplies. Syringe. Water. Formula. A heating pad. Then an hour trek to the vet. My worry, she will not get the care she needs to survive. Baby Blu… meet the world.”

There’s so much that is wrong with this festival. It’s not uncommon for stolen dogs to be slaughtered. Although some dogs are specifically bred for meat, most of the meat for the festival is illegally brought in from elsewhere in China, including many dogs that have been stolen or captured from the street.

The dogs are shipped long distances in cramped cages without food or water. When they arrive in Yulin, they’re often sick, dying, or already dead. This isn’t just a problem for the dogs—it’s also a health risk to the people who eat dog meat.

Still, amid all the horror, there is also hope. Fewer people attend the festival in each passing year, while protests continue to increase. Much of the thanks goes to Chinese social media, where resistance to this festival and similar ones is fast increasing.

According to Wendy Higgins of the Humane Society International, fewer dogs have been killed this year. And at the same time, opposition to the festival is growing in China. Local politicians in Yulin have renounced the festival and even banned their employees from participating.

My heart breaks when I think of the terrible things that all these dogs are going through. Hopefully we can put an end to this cruel festival as soon as possible! Share if you agree!