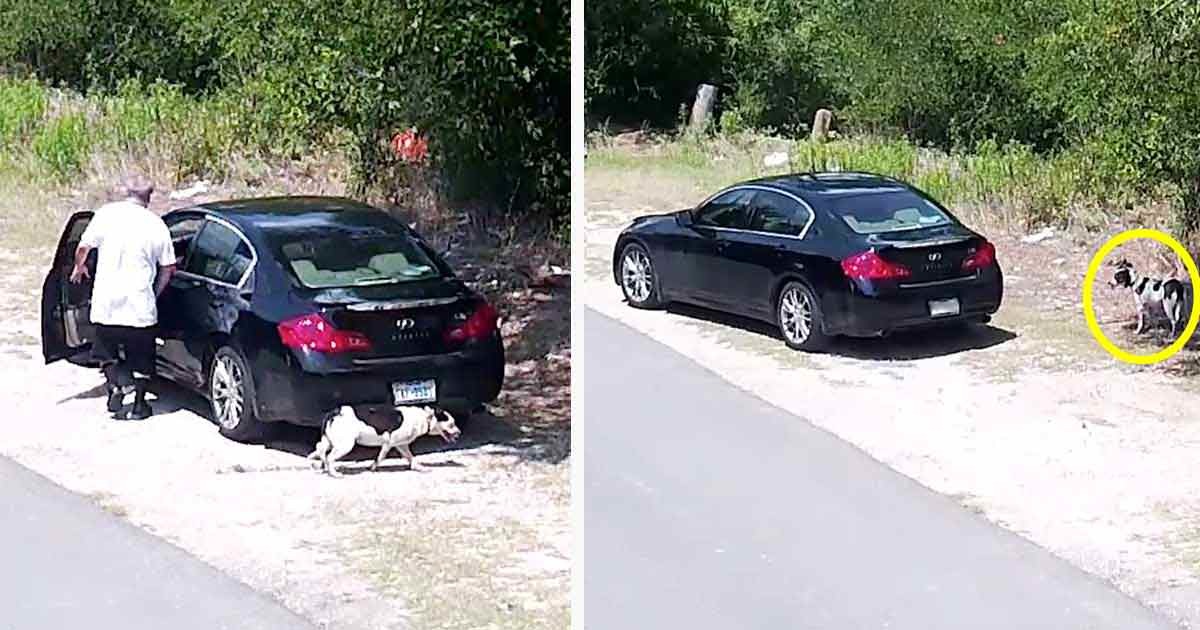 Everyone who has ever been around dogs knows how much love and care they need. Dogs are members of the family who are there for their humans through good times and bad. And we owe it to our four-legged friends to be there for them, too.

But if your life changes and you suddenly can’t take care of your dog, it’s your responsibility to find a new forever hom for him or her. It’s the least you can do for a member of the family.

Unfortunately, there are people out there who don’t take responsibility for their animals. This story is about one of those people.

Please read it and share it. Hopefully it will make people think about the responsibilities involved before they adopt a dog. And hopefully, it will also make them think twice before trying to abandon a dog.

This story took place in Dallas, Texas. A surveillance camera on a deserted road suddenly caught something suspicious. In the footage, a car pulls over, a man gets out of the car, and he opens the back door…

As the security footage continues, the man pulls a dog out of the car and then gets back in his car and drives away.

It’s unimaginable! And obviously not legal.

This happened in August, and in September, the man was arrested on animal cruelty charges, writes CBS 12 News.

At first, the police couldn’t find the guy. But after they put out a notice about the incident, he turned himself in to police.

They asked him how he could do something like that. His answer? He was trying to help his sister get rid of the dog because she couldn’t control her.

Which is nonsense, in my opinion! But whatever the reason, the dog was taken in by the animal organization SPCA.

The heroes who saved her called her Claira-Belle. But what they didn’t know was that the dog would soon get a new name again. A new family was already ready to adopt her!

This adorable puppy is now named KD and she lives with her new family. Her new owner wrote about how she’s doing on Facebook.

“Here’s an update on this sweet puppy!! Claira-Belle (Now KD) is doing extremely well in her new home! She is quite possibly the sweetest dog I have ever met. From the time we got home on Saturday to now, KD has brought so much love into my home already. She enjoys cuddling on the couch, watching tv, and going for walks around the neighborhood. She is extremely calm and just wants to love everyone she meets. I was a little nervous about how she would adjust to her new surroundings because she was so timid in the shelter, but this beautiful girl has blown me away. Thank you to the people who rescued her and to the SPCA who brought us together. My heart is so so full of love and gratitude!!”

Thankfully, KD’s story had a happy ending. Mistreating animals is always wrong, as this story shows. Some people simply aren’t able to care for animals. The man in this story obviously should have found the dog a new family who would love her. Not dump her on the side of the road.

I don’t understand how anyone could abuse or abandon an animal. Every animal deserves love and care! Share if you agree.