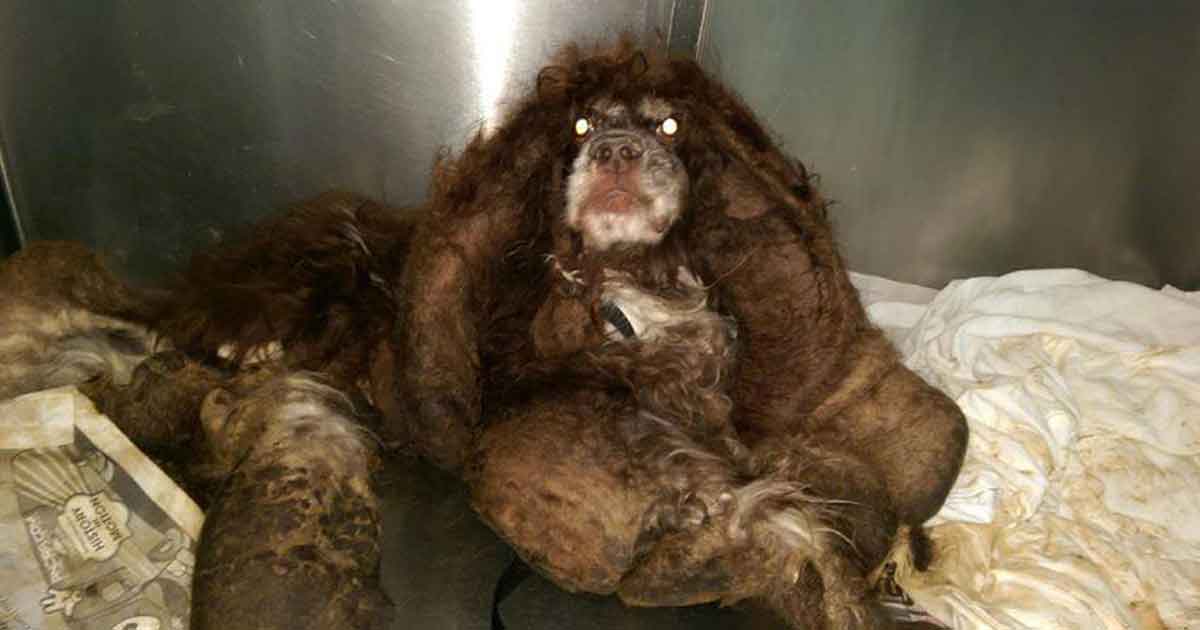 As vulnerable creatures that often cannot fend for themselves, domesticated animals must be taken care of humans. Unfortunately, one too many simply don’t receive such care — they are neglected, or worse, abused.

As an animal lover, such cases always break my heart and/or make my blood boil. There is simply no good excuse for abandoning a vulnerable pet, and it is certainly despicable to purposely hurt one.

Thankfully, there are others would agree whole heartedly.

Such as these animal angels, who discovered a severely neglected dog one day. The abandoned creature was completely alone and starving. But what they did for him had my heart leap with joy.

A San Antonio Texas police department got a rather strange call one day. The individual on the line wanted to notify them about a strange creature they saw on the road. The animal was in horrifyingly bad shape.

The police arrived on scene to discover a creature they could barely identify. Upon closer inspection, it was clear it was a dog — its gender or breed was impossible to decipher.

The reason? It was covered in layers upon layers of dirty, matted fur. The police realized time was of essence and rushed the dog to the San Antonio Animal Care Services Animal Center Clinic.

Vets on site immediately began working on the poor dog, determined to help it. They slowly began cutting away at the thick matted fur.

“He had to be sedated for the mats to be safely removed,” Cynthia Martinez, chief operations officer for San Antonio Animal Care Services, told The Dodo.

As the fur was gradually removed, the dog began to reveal itself more and more. The vets gradually saw that beneath the heavy matted fur was a sweet Cocker Spaniel.

Thick piles of fur was removed — 6 pounds of it, in fact. It was shocking that the poor dog had been carrying all that extra weight.

“The clinic staff completed the mat removal and reported that they removed 6 pounds of mats,” Cynthia said.

The vets guessed that the dog was about 8-years-old. Once all the thick matted fur was removed, the cocker spaniel showed sign of relief, as if realizing this was a new beginning.

The dog’s story alongside his pictures were later posted to the clinic’s Facebook page, where hundreds reached out with sympathy and well-wishes. Cocker spaniel owners were especially touched.

“This is what happens when you don’t trim a Cocker Spaniel (a breed known for its long coat and need of regular cutting) for months… maybe even years?” they wrote.

Among those touched by the rescued cocker spaniel was the Cocker Spaniel Rescue of Austin and San Antonio organization.

“We had to have this dog,” Rebecca Payne, who works with the organization said. “He is the worst dog I’ve ever seen like that. We wanted to give him a happy life.”

And that’s what they did!

Rebecca promptly headed to the animal shelter to pick up the dog.

“I was shocked. He was so tiny,” she said. “He was so underweight you could see almost every bone in his body. I think the mats were so bad he couldn’t open his mouth to eat.”

They soon named the pup Hamish. Vets on site estimated he’d been covered in mats for years, and this of course, had harmed his health. He was malnourished and his nails were badly overgrown. His teeth were in bad shape due to such a lack of food.

Hamish spent the next couple of weeks with the Cocker Spaniel Rescue of Austin and San Antonio, receiving treatment and dental surgery.

“Every dog has about 42 teeth,” Rebecca explained said. “Hamish had to have so many removed he has only 11 out of 42 left.”

Rebecca grew so fond of Hamish, she decided to foster him. He has now left the vet’s and his dark days are over. Things can only brighten up from here, and they already are.

Hamish is eating and gaining weight.

He is still thin enough to require wearing sweaters to stay warm but his condition is just getting better every day. He has proved to be a friendly, sociable and loving dog and gets along fabulously with another dog Rebecca is fostering.

“He loves other dogs, his tail gets going,” Rebecca said. “For as much as he’s been through, he’s one of the friendliest dogs we’ve ever had. He’s just so happy.”

Without heaps of fur blocking both his movement and eyesight, he is discovering a whole new world: one where joy, food and plenty of tender loving care prevail!

Hamish is reported to be extremely responsive to all the love he has received — and this despite such a sad and traumatic past.

“He gets a bad rap for his looks,” Rebecca said. “He looks like a grumpy old man, but he’s the most loving, amazing guy.”

Hamish will soon be up for adoption in Texas — and with such a sweet personality, who wouldn’t want him? Anyone interested can visit the Cocker Spaniel Rescue of Austin and San Antonio’s website for more.

Just look at that face!

How sweet is little Hamish! I am so, so glad he was removed from where he never belonged and is now being given a bright new future. Please share to thank all the wonderful animal friends whose hearts of gold are the reason this dog got the second chance he so deserved.