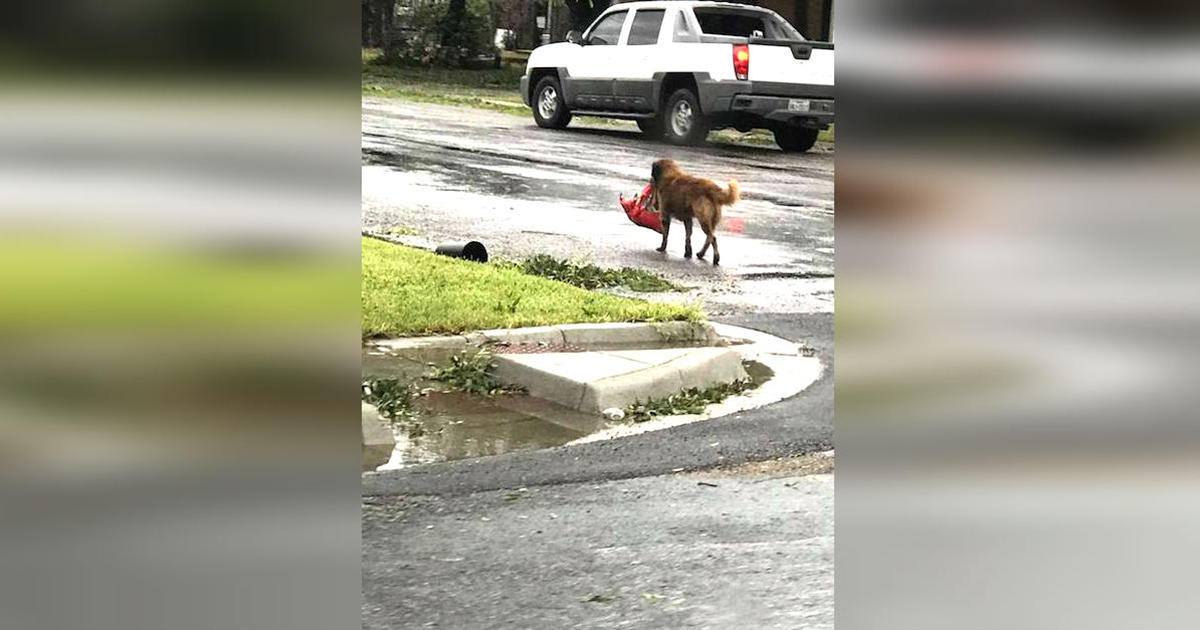 Millions of people in Texas have been affected by Tropical Storm Harvey, which has so far claimed the lives of at least five people.

On Friday, the storm system hit the coast as Texans stocked up on necessities like food and water.

Then on Saturday, Tiele Docken, from Sinton, Texas, went out into her front yard and saw something that was almost too cute too believe.

It was just a dog walking down the street by himself. But it was what he was carrying in his mouth that made Tiele grab her camera. And now, that picture has been shared by thousands of people around the world.

Thousands of Texans have been rescued from their homes and cars after getting stuck in the rising floods caused by Tropical Storm Harvey.

“Even though the storms are still raging, we have teams already working to get in to try to rescue as many people as we can,” Texas Governor Greg Abbot said on Saturday, according to CBS News.

While people were stockpiling necessities over the weekend, it seems that one dog was, too.

The dog, whose name is Otis, was carrying a bag of dog food in his mouth. Sinton, Texas resident Tiele Dockens couldn’t believe her eyes when she took his picture.

“My thought when seeing Otis was, ‘What is that dog carrying?’ When I figured out it was an entire bag of dog food he was carrying prancing along the street, I thought, ‘Oh, how cute! He got himself some treats,'” she told LittleThings.

Tiele, who wasn’t badly affected by the storm, uploaded her picture of the dog to Facebook — and it’s already been shared more than 30,000 times. For many of us, Otis represents the strength and determination that Texans are currently showing the world during this natural disaster.

Some people think the photo is sad because Otis is all alone in the picture. At the same time, he’s become something of a celebrity.

This is Tiele Docks — an ordinary Texas mother.

Under the picture, she wrote:

“This dog is walking around Sinton TX carrying a entire bag of dog food with him. LOL #refugee

PSA: Owner is found. He is not a stray he just got out on his street.

As we can see in the picture, Otis is walking along the street with a big bag of dog food — just like any human would do in the same situation. At the same time, we’re glad Tiele mentioned that Otis isn’t homeless, which many people thought when they saw the picture. Otis actually lives down the street from Tiele.

“I had seen him a few times in town before and someone had told me he did have an owner. I just wasn’t 100 percent sure who it was, but luckily with my Facebook post, I was able to find out who owned him within 10 mins.”

This is Sandra — one of Otis’ owners!

Sandra saw Otis’ picture on Facebook and contacted Tiele — pointing out that she had checked on Otis and made sure he was out of danger.

“I have talked to his owners and they can’t believe that their dog is so famous. This dog was never lost or in any danger. If an animal was in some kind of trouble, we would certainly have helped it!”

Now, Otis is being celebrated as the smart dog he is. Many people wrote in the comments below the picture that he was both cute and smart to prepare for the terrible storm.

But how did he manage to get that food?

Tiele told LittleThings that there’s a shop down the street and that he must have gotten it from there.

Otis was both brave and clever to pick up his own food.

But not all the animals in the Houston area have been as lucky. Still, Tiele thinks that Americans will donate money to charities that work to reconnect lost animals with their owners after the storm. At the same time, a variety of sites have been set up where owners can search for their lost four-legged friends.

We really hope that every animal that gets separated from its family is reunited with its loved ones. Please share this article to support the families currently struggling to reunite with the furry members of their family!