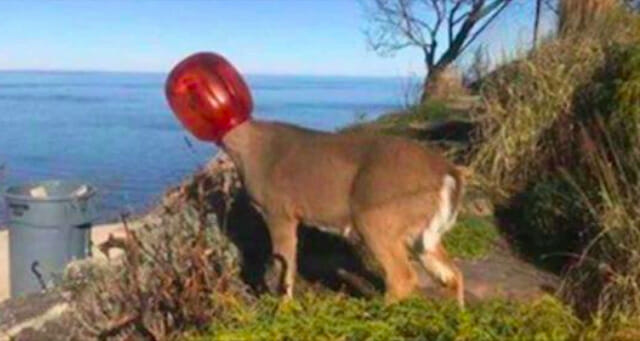 Earlier this week, residents of Rocky Point in Long Island, New York discovered a very strange creature out and about in their area.

It soon became clear that the creature in question was a deer, writes animal site The Dodo. It was also soon apparent that the poor deer was in severe need of help — a large, orange plastic jar was stuck on her head.

Residents of the area first tried to approach the wild animal, but it quickly ran away, according to The Dodo. The deer was, above all, clearly afraid.

In Need of Food

The deer’s head was completely stuck in the plastic jar, making it impossible for the animal to see properly, and of course, be able to eat anything. It was obvious that the deer was likely in dire need of food, causing people to fear for her life.

Word of the deer’s predicament reached Facebook. There, the group Strong Island Rescue League posted a photo of the deer to draw the local community’s attention. The hope was that the deer would remain on site for some time and give them the chance to arrive and help her.

Five days went by before the deer was seen again. She was discovered alone, hungry and certainly terrified in a neighbor’s yard. I can hardly imagine how the poor animal must have felt at this point.

That’s when the animal rescue group went into action — and did what they had to do to save her life.

The first to approach the deer was Frankie John Floridia from the rescue group. After some struggle, Frankie managed to take hold of her and lay her on the ground.

He then quickly and easily released the plastic jar from her head. The deer immediately ran off into the open. If she had been able to speak, she would certainly have thanked this animal hero!

Hopefully, she could quickly get something to eat following her horrible predicament. Frankie and the rescue organization have since been praised for their actions in social media as well as in television and newspapers, where their heroic efforts have been recognized.

Happy Monday! Strong Island Animal Rescue League does it again! The deer whose head was trapped in a plastic container…

There’s an obvious lesson to be learned here. Never throw trash out in nature! This deer was lucky enough to get help in time, but think of other animals that may not be as fortunate.

I think this story needs to be shared with everyone as an important reminder! Never throw garbage out in the wild.