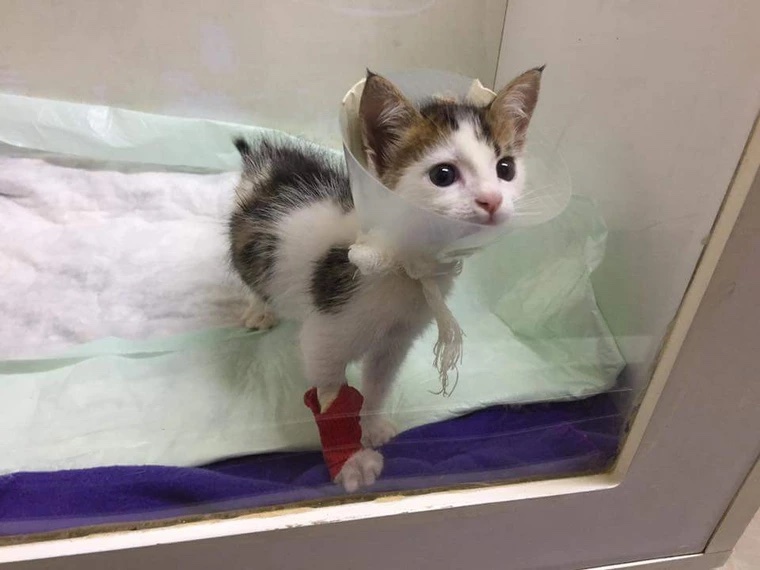 Martyr is not a typical cat.

First, she was found in 2016 in a dumpster after a passerby heard her soft meowing coming from inside.

Clearly abandoned there, the kitten was suffering from a broken front leg in addition to gangrene in a back paw.

Thankfully, her new mother knew exactly how to help her. Over time, she has been nursed back to health and still wears her cone proudly.

Martyr sadly lost her back paw as a result of the gangrene she suffered from. However, her mother was experienced in fostering kittens and still helped her heal safely to get her to where she is today.

Outside of her humble beginnings in the dumpster, Martyr was only recently discovered to be a male cat!

While most calico cats are female, Martyr is a very rare exception. In fact, he was called a “she”  up until recently.

This is due to the X chromosome within cats, which helps to display orange and black fur in cats.

In female cats, due to the double X chromosomes they have, this gives them the appearance of what we consider a calico cat–a base white coat with the orange and black fur on top.

For a male cat to appear as a calico, therefore, they must actually carry two X chromosomes in addition to a Y chromosome.

That makes cats like Martyr a miracle of nature.

This, combined with his humble beginnings, makes this cat as rare as a fictional unicorn. Martyr’s adorable face became part of an internet sensation on the site Imgur when his new mother’s niece posted all of the pictures featured in this article there!