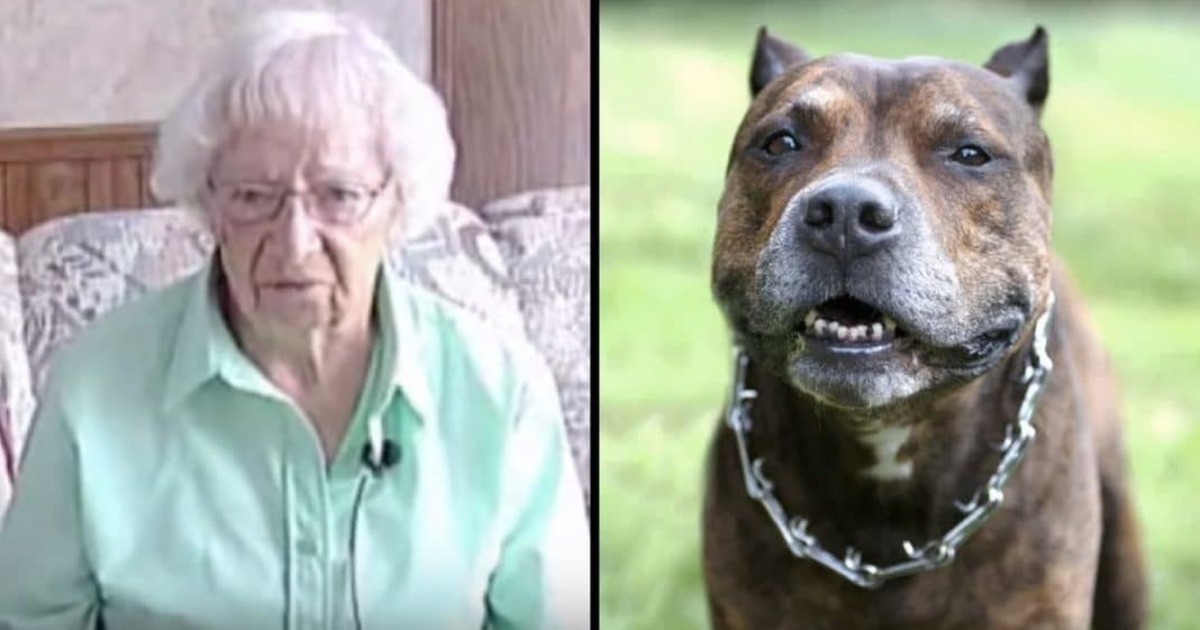 In an ideal world, all animals would be cute, cuddly, and kind. But unfortunately, this isn’t always the case.

In a scene that could have been from a horror movie, a 97-year-old woman was picking dandelions in her garden when four pit bulls suddenly appeared in her yard and started running toward her.

It’s rare for dogs to be violent, but it’s important that we don’t blame such behavior on the dogs, and instead focus our attention on how their owners treat them.

Still, that’s no comfort to an old woman about to be mauled by four pit bulls.

She was scared to death and thought her life was about to come to an end. But little did she know that a four-legged hero was about to step in.

At the age of 97, Sophie Thomas still enjoys gardening, and one day a few years ago, the Michigan resident was enjoying the beautiful weather while she picked dandelions in her garden.

But unfortunately, Sophie’s day turned into a nightmare when she was unexpectedly attacked.

According to Digital Journal, four pit bulls belonging to Sophie’s neighbor had escaped through a window.

Then suddenly, they were charging full speed ahead at Sophie.

“All of a sudden these four pit bulls came marching in and they surrounded me. They kept going around and around. One of them kind of lunged for me and I hit him on the head and he backed off. Then another came towards me and I was scared stiff. I gave him a wack. All of a sudden, my cat jumped in the middle of it,” says Sophie Thomas.

The unlikely hero’s name is Tiger.

The brave cat diverted the dogs’ attention, and the pit bulls started chasing her instead.

Thanks to Tiger’s quick thinking, Sophie managed to get into her house, safe and sound. As she cleaned her wound, Sophie remembered her beloved Tiger and was sure she had been seriously injured.

But then, Sophie looked out the window, and to her great surprise and joy, she saw Tiger waiting outside the door unharmed.

“I do not know what would have happened if my cat hadn’t jumped in,” says Sophie.

“She’s very close to me and follows me around. She’s very friendly with me because I live alone,” says Sophie.

The owner of the dogs, Sophie’s neighbor, blamed her son for leaving a window open, which is how the the dogs escaped.

The neighbor insisted that her dogs aren’t violent, but she still had to pay $300 and have her dogs quarantined for 10 days, writes Digital Journal.

Thank goodness everything turned out alright — thanks to brave Tiger!

Please share this story to pay tribute to this heroic cat!