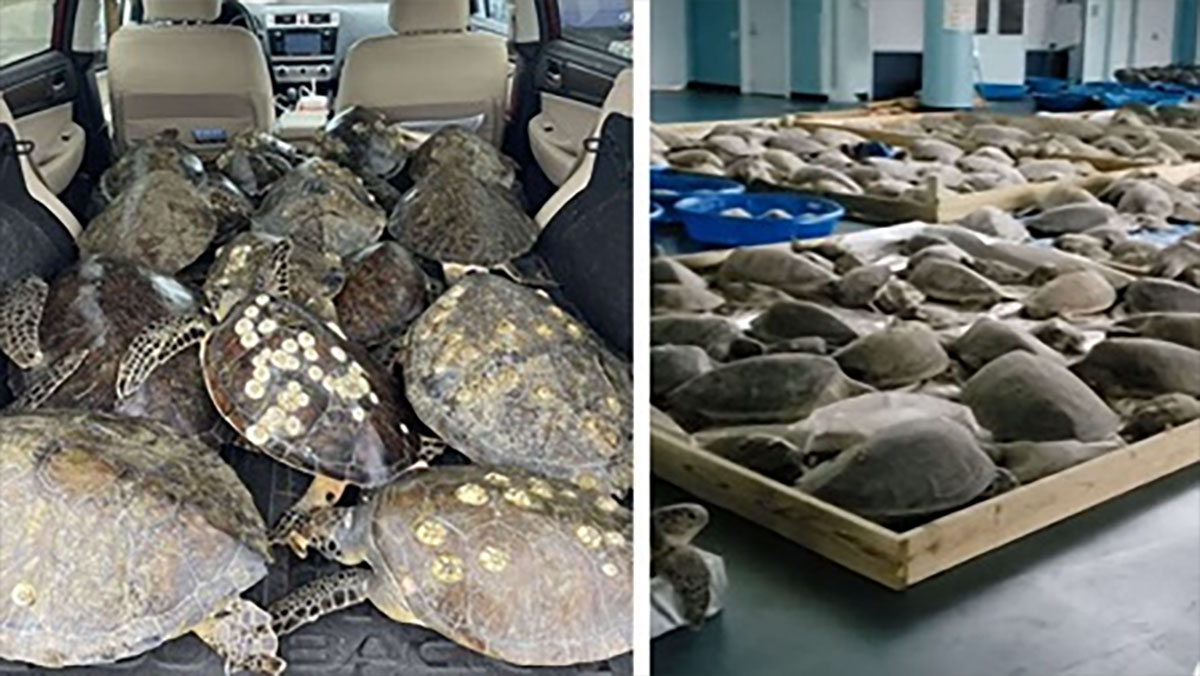 As the unusually low temperatures continue across Texas it’s not just humans suffering though the harsh cold snap.

Thousands of sea turtles have been left paralyzed by the frigid temperatures and are in danger of drowning.

Turtles are cold blooded so are unable to regulate their internal temperature.

When exposed to unusually cold water temperatures for an extended period of time, it causes a hypothermic reaction that may include a lower heart rate, decreased circulation and lethargy, followed by shock, and even pneumonia.

This puts them in serious danger of drowning so volunteers from Sea Turtle, Inc. on South Padre Island have been working tirelessly to save them – in an unconventional way.

Volunteers have been putting the turtles in their vehicles and driving them to the South Padre Island Convention Centre and Visitors Bureau which has become a temporary shelter for the rescued turtles.

As of Wednesday 4,500 turtles have been saved but the number is rising by the hour, as per NPR News.

Executive Director of the conservation nonprofit Wendy Knight said “the Armageddon of all cold stuns”, has left thousands of turtles unable to move due to the frigid temperatures and is grateful that so many people want to help.

“The love and support of people who just want to help things that can’t help themselves is overwhelming,” Wendy said, as per NPR News.

The five species of sea turtle found in Texas are all considered either threatened or endangered, according to the U.S. Fish & Wildlife Service. One of the turtles rescued on Tuesday was over 100 years old and weighed 350 pounds.

Wendy said the mass release of this many turtles, when the conditions are right, will be “unprecedented.”

Let’s hope that all these beautiful creatures can be saved.

Help us thank all the volunteers who are helping in this rescue by sharing this story.