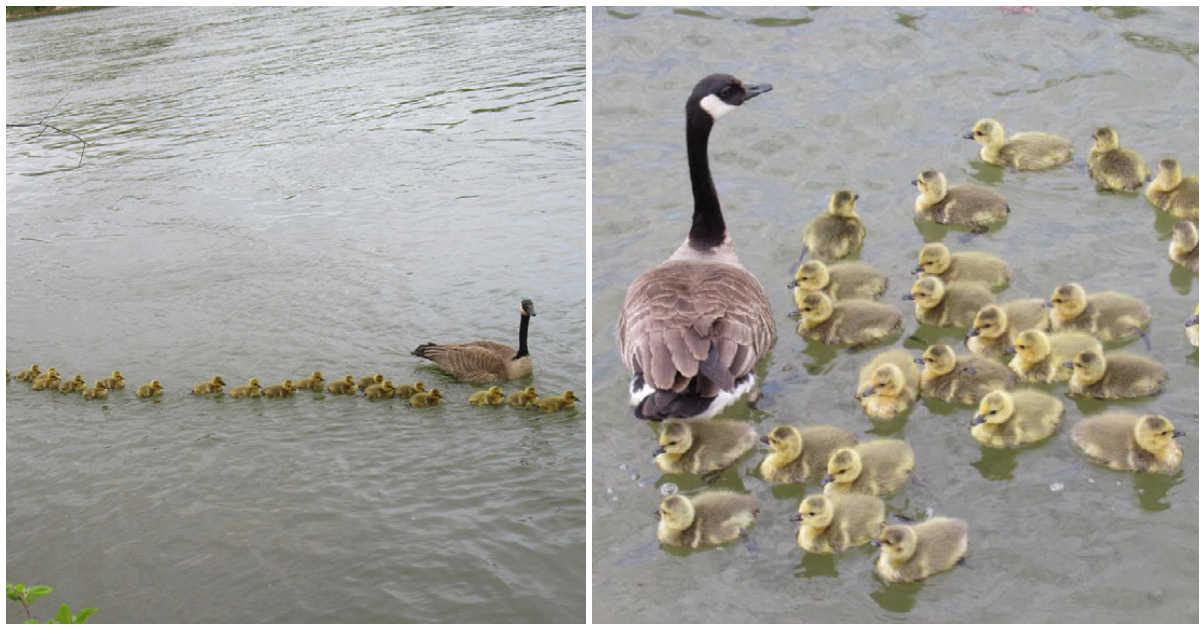 A mother’s work is never done. It’s true for humans, and it’s true for nearly all creatures in nature. Observe any group of animals and chances are you’ll find a mom caring for her young, protecting them and teaching them how to survive.

And some moms really have their hands full — or wings full. That’s what one photographer saw when he found a goose caring for an unbelievably huge group of goslings.

Mike Digout, from Saskatoon, Saskatchewan, loves to photograph local wildlife at the riverbank. During one trip in May, he was struck by the sight of some adorable geese hatchlings — and the mother caring for them.

He was in awe over the mother goose’s ability to keep 16 goslings under her wings — little did he know, that was only a fraction of this busy bird’s brood.

“I was stunned that this mom had 16 babies, so I started going back every night looking for this mom and her goslings,” Mike told The Dodo. “And every day it seemed like she had a bigger group.”

In subsequent trips, Mike counted more and more children under the goose’s care.

“At night the mom still had 36 of them going to sleep underneath her,” he told the CBC.

Eventually, he counted a whopping 47 goslings following her around.

Geese hatch about six goslings per season, so Mike suspects that many of these kids aren’t her own. Often times in nature, birds will look after another bird’s hatchlings — as a “babysitter,” in a way.

“Either it’s a gosling daycare while the other adults eat or she has adopted or sometimes stolen goslings from other families,” Mike said.

But it looks like this busy mom and her mate are happy to take on the extra responsibilities, and do a great job taking care of the big group of kids.

“It was incredible how calm she was with so many goslings around,” Mike told The Dodo. “She seems like such a patient mom.”

Wow! We could never imagine caring for 76 kids at once — just one is a handful! — but this goose makes it look natural.