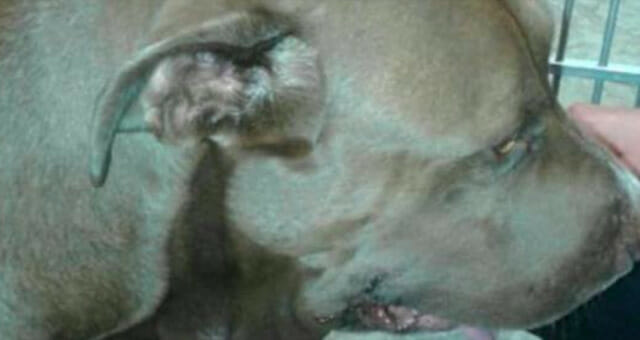 Sadly, pit bulls continue to have a negative reputation. Known to be popular among fighter dogs for their powerful jaws and bites, the dogs are often trained in an extremely abusive fashion, bred to become violent animals in cages.

But this is far from their true nature.

When raised properly, pit bulls are wonderful, gentle and protective pets who would never hurt an innocent person. If you have any doubts, then make sure you read the story below.

Stacie Rae English’s brother Shelby owns a lovely pit bull named Hurley. And when her brother told her what Hurley did one dramatic night, she couldn’t help but immediately take to Facebook to sing praise to his brave dog.

It all begins on an ordinary evening.

“My brother was walking his pit bull lab mix, Hurley, in our neighborhood field around 10 pm. He walks him this late so he can let him off his leash so he can do what he loves to do, explore all the different smells,” Stacie Rae writes.

Things suddenly took a turn, however Shelby and his dog heard an unusual sound nearby.

“They heard a young kid scream and before my brother knew it, Hurley took off after the scream. With my brother close behind, he saw Hurley grab a copper head snake away from the little boy and fling it around, later found out he had killed it,” she continues.

Stacie Rae’s brother then saw as the boy ran back to a car where his mother presumably was. The mother appeared to understand the gravity of the situation and quickly grabbed her son and zoomed off.

“The little boy ran to his mother’s vehicle and drove off so fast that my brother was unable to find out any information on the little boy. (We are assuming because they left so fast that he was bitten and being rushed to the ER),” Stacie Rae says, adding, “my brother then went on to call animal control and the Highland Village Cops showed up to check out the scene. They asked to take a look at Hurley to see if he was bitten. To my brothers surprise, he was bleeding, had a swollen neck and foaming from his mouth.”

Sure enough, poor Hurley had been bitten.

“They found two puncture wounds in his upper lip,” continues Stacie Rae. “Shelby rushed Hurley to Denton Animal Emergency Hospital where he stayed the night so they could check his blood clotting ability multiple times through out the night. Shelby and Hurley both got home this morning. Thank God, Hurley is doing a lot better this morning, just seems a little uncomfortable with his swollen face and neck.”

Stacie Rae and her brother later discovered that the little boy had come across a copper head nest.

It’s unclear how the little boy has fared but safe to assume he was brought for examination well in time thanks to Hurley’s swift actions!

“Hopefully Hurley prevented him from getting bitten, or at least getting bitten multiple times, writes Stacie Rae. “We are still trying to find out who the little boy is and make sure he is okay. Here’s our hero pit bull. I’d like for his story to get around for those who judge his breed.”

What an incredible rescue!

See Stacie’s post below, republished by Love What Matters.

"My brother was walking his pit bull lab mix, Hurley, in our neighborhood field around 10 pm. He walks him this late so…

What an incredibly instinctive and brave dog! Please share this story of Hurley’s amazing bravery to show others just how kind and brave pit bulls can be. We must stop judging these dogs just because of their breed. ❤