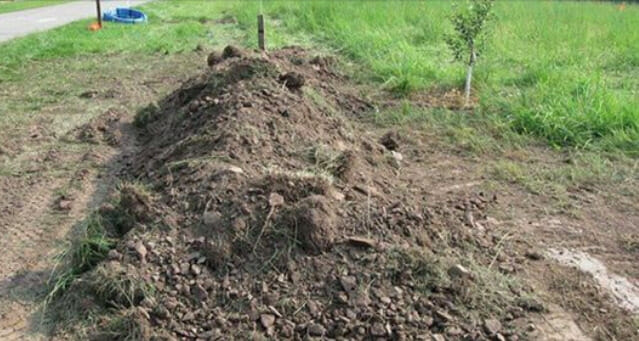 I never cease to be stunned at how terribly some people treat innocent animals.

It’s perfectly okay not to elect to have any pets, but for goodness’ sake — be kind towards animals and never hurt or abandon a helpless animal you no longer want. They can be passed over to a family who wants to take care of them or worse case, at an animal shelter.

Something must be seriously wrong with people who feel it is somehow ok to treat animals as if they were garbage.

Police in Williston, Florida were out on a job one day when they heard a terrible noise. It sounded like a dog whimpering, but no dog was in sight.

They decided to follow the sounds to get to the bottom of the mystery. That’s when they shockingly realized the noise was coming from a large heap of earth.

They knew they had to act fast and immediately began digging. After some time of hard work, they finally uncovered a tiny puppy, reports Today.

The puppy laid about six inches beneath the ground and had been buried alive. There is no other possible explanation than that someone had simply abandoned the puppy like that and left it to a cruel death. Although the puppy had barely had any oxygen to breathe, he’d miraculously survived.

The brave little guy was rushed to a vet, where they discovered he was just a week old. Fortunately, he fared well and would survive his terrible predicament.

The famished puppy took the bottle and seemed very happy to have something to eat.

They named the miracle pup Tucker — and he was immediately popular with the staff. In fact, despite his terrible start in life, it didn’t take long before sweet Tucker would end up in good hands…

One of the veterinarians that treated him became so infatuated with the adorable pup that she decided to adopt him and offer him the forever home he truly deserved!

I’m so glad that this horrible story had a happy ending. I really hope they find and punish the monster who did this to the poor pup!

Share this article with your animal loving friends if you’re also glad Tucker finally got the home he’s always deserved!