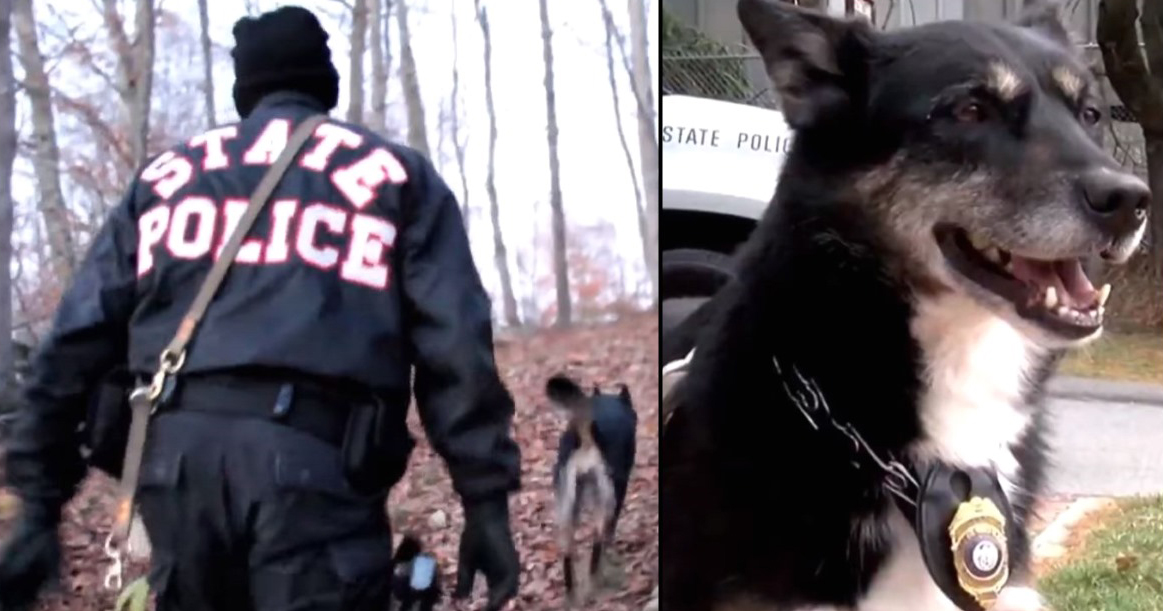 When K-9 officer Matthew Zarrella heard of a dog set to be euthanized in a shelter – after several failed attempts at adoption – it was as though an inner voice told him to act.

Zarrella was informed how the dog was extremely energetic and hyperactive – she’d been described as “impossible” and “not adoptable”.

Yet Zarrella had a feeling there was something special about the dog, so he decided to gamble and take a closer look.

It didn’t take long for his suspicions to be proved correct. As you read how the story below unfolds, you’ll quickly understand why.

Dog trainer Patricia Inman has been working for a long time with abandoned, disabled and problem dogs. She’s well educated in canines and has been there for a good many dogs who otherwise had no hope.

However, Ruby would prove to be a tricky case. Patricia tried tirelessly to train and calm the unhappy dog, but things didn’t go well.

The idea was to get Ruby to a point where she was stable enough to be adopted and thereby take her place in a loving home.

It was small wonder, then, that she was heartbroken when she realised no one wanted to adopt the dog. As a result, Ruby was set to be put down.

Although the couple had made visible progress in her training, it simply wasn’t enough.

In fact, Ruby was mere hours from being euthanized when help came from an unexpected source. Patricia called the Rhode Island police force in order to get through to her friend, Matthew Zarrella.

Patricia asked him to adopt the dog, but she could never have been prepared for the chain of events that would follow.

When Zarrella stopped by at the dog shelter, he immediately fell in love with Ruby.

Despite the fact the dog was energetic as promised, he realised she was intelligent. He knew a person who would love to take care of such a dog.

Zarrella immediately contacted his colleague and friend Daniel O’Neal and made an offer he couldn’t refuse.

O’Neal happened to be a genuine dog lover who longed for a four-legged partner.

Zarrella offered O’Neal Ruby to keep as his own and, of course, he was pleased to accept.

O’Neal spent the next four months training the “impossible” dog to bring her up to standard. They quickly became inseparable.

Not only did he succeed in the training, but it soon became apparent that Ruby was ready to move onto bigger things.

Four years after becoming a team, Ruby and O’Neal ran into trouble. A serious situation unfolded – the whole police district was looking for a missing teenager.

A search was conducted in a large woodland area, with several dog patrols participating in the hunt for the lost teen.

Then, while out searching, Ruby pulled away and suddenly began to bark.

“We were one and a half miles out in the woods when Ruby suddenly ran away,” Daniel recalls.

The police followed her lead and got a shock when they found Ruby standing next to the missing teenager.

The boy was seriously injured and in need of urgent medical care.

He was taken to hospital to make his recovery and Ruby was hailed as a hero… but the story doesn’t end there!

O’Neal was oblivious to it at the time, but Ruby and the injured boy shared a deeper bond.

When O’Neal finally realized who the teen was, it felt like a stone dropping in his stomach.

In connection with the police search, O’Neal questioned the victim’s mother. It soon transpired that the boy’s mom was, in fact, Patricia Inman.

Patricia revealed that she had taken care of Ruby before she joined Daniel – obviously a big surprise for all involved.

It’s difficult to say for sure, but perhaps this was Ruby’s way of saying thanks to Patricia, who took care of her when she needed it most, and effectively saved her life.

That’s what I choose to believe, anyway.

Ruby was handed a second chance at life thanks to Patricia’s actions – she ended up returning the favor in the only way she could.

When amazing and dedicated animal lovers are involved, miracles can and will happen! Like and share if you agree.