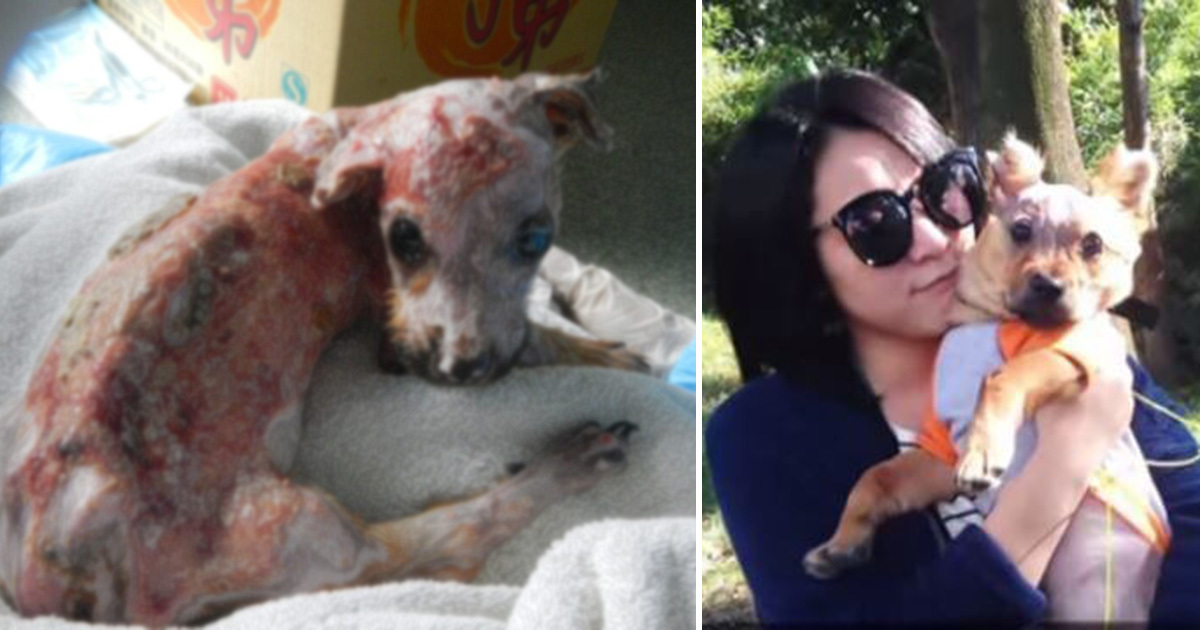 Every dog owner has their own ideas about discipline, and what crosses the line is sometimes debatable. But what happened to a six-week-old terrier named Tuffy went as far past that line as possible.

When Tuffy’s owner saw him chewing his cell phone back in 2015, he subjected the puppy to unimaginable torture, writes the organization Animals Asia, which works to end animal abuse.

According to Animals Asia, the monster poured boiling water all over Tuffy’s body. Then, he threw the puppy from the fourth-floor of apartment in Chengdu, China.

It was a miracle Tuffy survived the boiling water and the four-story fall. But he did, and moments after he hit the pavement, a guardian angel walked into his life.

A 30-year-old woman named Yan Yingying found Tuffy teetering on the edge of death and knew she had to act fast. She rushed him to the closest clinic, which was an hour away.

Emily Drayton, a veterinarian at Animal Asia, remembers vividly how she felt when she first saw Tuffy.

“I was shocked and sickened to my core. I could not stop the tears from rising, there was no point. Never had I seen an animal in so much pain,” she said.

When burns cover more than 50 percent of an animal’s body, they aren’t expected to survive. But Tuffy’s burns covered 60 percent of his body. He needed 24/7 care, and at first, he couldn’t even close his eyes while he slept.

It’s hard to imagine how much pain Tuffy must have been in! But he had an amazing team looking after him for months and months as he slowly recovered.

All the while, Yan, the woman who saved Tuffy, stood by him, and she even adopted him and gave him a home, writes the Daily Mail.

“I’ve read that people who jump out higher than the third floor of a burning building are unlikely to survive. It was a miracle that Tuffy did. The second miracle was the extent of his burns. When they cover over 50 per cent of the body, animals are not expected to survive. Tuffy survived with over 60 per cent of his body burned. How his life started was horrific,” Robinson said.

She also said that it’s important for healthcare workers to put aside their feelings to provide professional help to the animals despite the tragic fate of dogs like Tuffy.

No one knows what happened to Tuffy’s original owner, but hopefully he was punished.

Nowadays, Tuffy and Yan are living a wonderful life together.

Share to pay tribute to the fine work of Animals Asia!