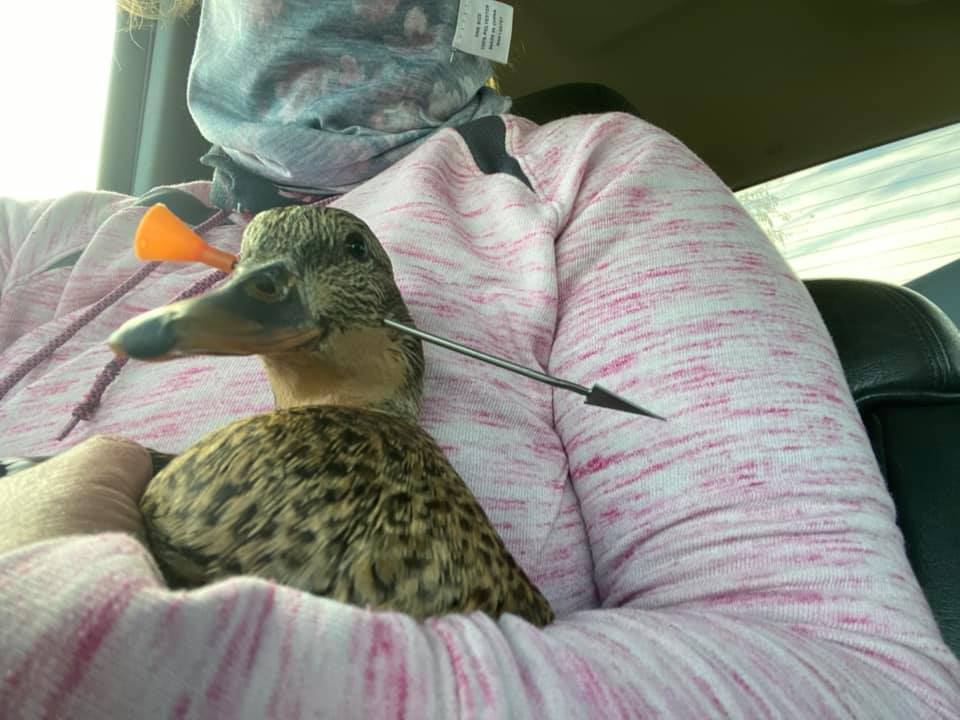 It’s unbelievable how cruel some people can be to animals. Innocent creatures have been found in terrible conditions, injured at the hands of humans.

As cruel as some people are, there are more people willing to step up and save an animal in need. Like one rescue group, who saved a wild duck after a shocking injury.

Last month, the Lake Lowell Animal Rescue, in Idaho, responded to a call about a duck in need of help. They arrived on the scene and were horrified to see the bird had an arrow completely through her head.

It seemed the duck had been deliberately shot by some human who left her to suffer. The duck was found swimming around, unable to do anything about the arrow lodged in her skull.

“Some genuinely evil horrific excuse for a human being shot this duck through its FACE with a blow dart,” Lake Lowell Animal Rescue wrote. “Honestly we just can’t even…”

But the quickly launched a mission to save the poor duck. According to CBS 2, they were able to capture the duck using a net gun supplied by local grad student Matthew Gillikin, and then brought her to Treasure Valley Veterinary Hospital for treatment.

Veterinarian Dr. Karlee Hondo-Rust treated the duck, and was able to successfully dislodge the dart from her head.

As unpleasant as the situation was, the duck narrowly avoided more serious injury. The rescue called her a “Lucky Duck.”

“The dart actually entered just below her eye, so had it been a few millimeters back she would have lost her eye,” Dr. Hondo-Rust told CBS 2.

The vet said that the duck is now recovering, responding well to antibiotics and pain medication. It is hoped that she can be released back into the wild within a few weeks.

Sadly, this isn’t an isolated incident, but part of a pattern of cruelty towards these wild birds by local humans.

“I do think there is someone or more than one person going around doing this and it’s incredibly unfortunate and very very cruel,” Melissa Blackmer, director of Lake Lowell Animal Rescue, told CBS 2.

“It’s a recurring thing, so every few years or so we will get a run of ducks or geese come in because they have been blow darted and haven’t succumbed to their injuries.”

But luckily, this rescue was a big success, and the group was thrilled to hear the duck would make a full recovery: “It very literally seems like a miracle,” the rescue wrote on Facebook, describing it as a “happy ending” to a “quite tragic” story.

“This was both one of the more angering things we have seen as well as one of the most rewarding rescues to date,” they wrote.

Thank you to these rescuers and vets for saving this poor duck! It’s unbelievable what she went through but we’re glad she’s making a full recovery!