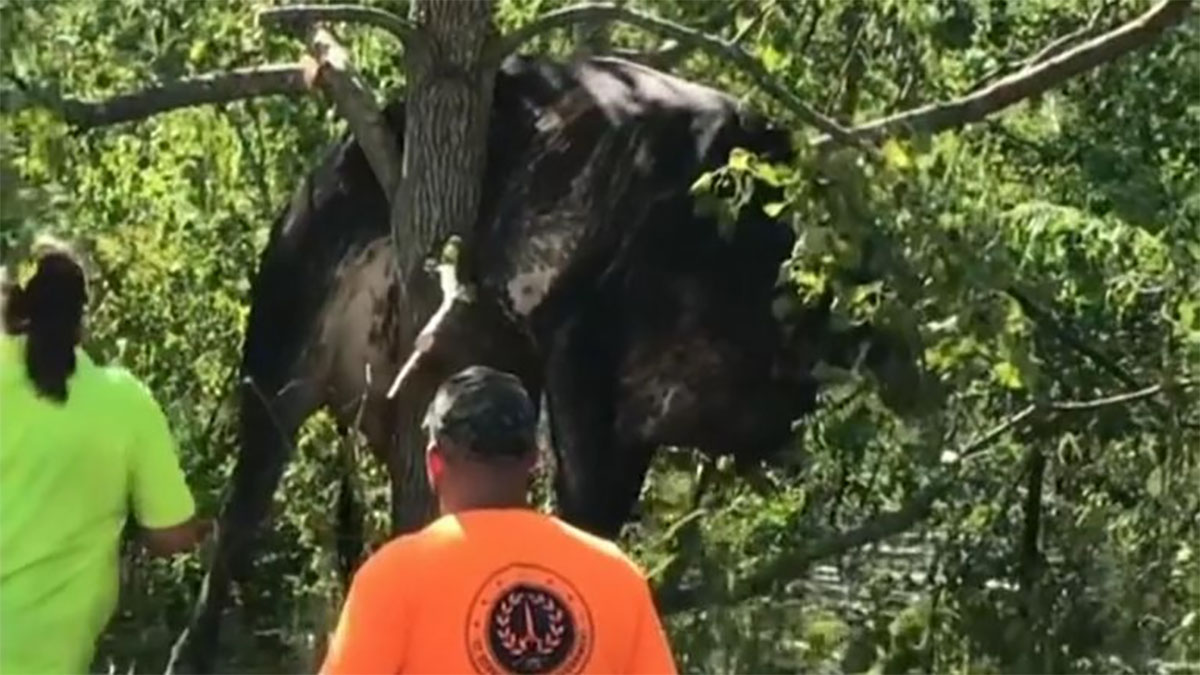 Thousands of volunteers and workers are assisting with the cleanup in the aftermath of one of the strongest hurricanes to hit U.S. landfall.

Hurricane Ida has caused at least 7 deaths and left millions of homes and businesses without power.

Following Saturday’s storm, Louisianans got to work assessing the damage and helping their neighbors in the massive cleanup operation.

Just east of New Orleans rescue workers made an unusual discovery in Florissant, Louisiana: a cow stuck in the branches of a tree.

The cow had become wedged between the branches of the tree as Hurricane Ida swept through the state.

As rescue workers use a chainsaw to cut the branches away and free the cow it remains very calm hanging over the trunk of the tree.

The video quickly went viral, as tens of thousands of Twitter and Facebook users watched and shared it.

Many were quick to ask what happened to the cow while others praised the rescue efforts of those involved.

“Thank God for people who care about these sweet animals,” one Twitter user wrote, while another said: “This poor baby, it was probably wedged there which might have saved its life. I hope they rescued it.”

More than 25,000 utility workers have been drafted in to help restore power to the area, which some residents and businesses could be without for weeks as temperatures remain at uncomfortable highs.

Remnants of the storm traveled north and on Wednesday one person was killed in Rockville, Maryland, in a flood from heavy rain caused by what was left of Ida, USA Today reported.

Ida is tied as the fifth strongest hurricane to hit the U.S. mainland based on windspeed at landfall.

I cannot imagine what the people of Louisiana are going through and on the anniversary of devastating Hurricane Katrina.

I hope power is restored quickly and they all, including the animals, get the help they so desperately need. Please share.