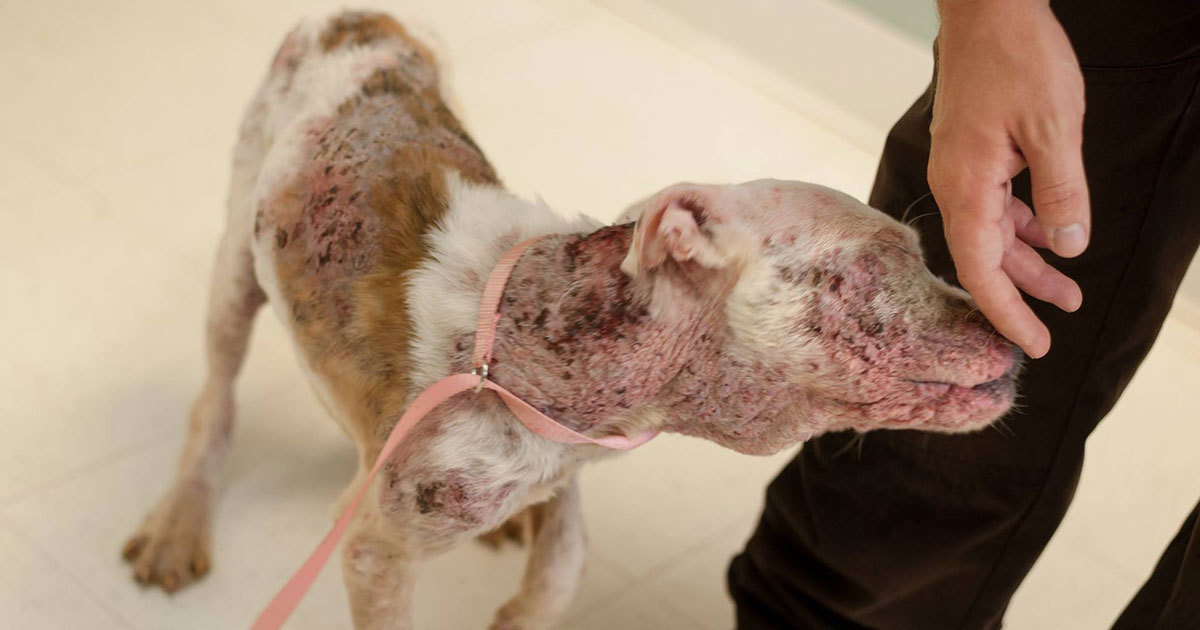 The dog was found when he was wandering around the streets by himself and in dire physical shape. Fortunately, the city’s animal welfare organization came to the rescue and saved XO, named so because he loves giving everyone kisses and hugs.

Please note – strong images below – but not to mention extremely uplifting ones, too!

It was in the US city of Brockton, Massachusetts that XO was discovered by the city’s animal control. When they found the one-year-old pup, they immediately brought him to an animal shelter. They soon discovered that XO suffered from demodectic mange, as well as a severe skin infection which had ruined much of his fur. He weighed a mere 15 pounds.

Despite his terrible condition, XO refused to gived up. He loved getting attention from everyone at the shelter. When he was rescued he had a serious case of “happy tail”, that is, he wagged his tail so much that it bled.

“Although he has been through it all in such a short amount of time, that doesn’t get him down,” Alyssa Ellman from Second Chance Rescue, where XO lived while waiting for to be adopted, told The Dodo.

“He is truly so outgoing and loves to follow you around, wag his tail and take treats from you,” Alyssa added.

Alyssa Ellman fell for XO as soon as she saw him at the shelter.

“The second I got to animal control and I saw his face and looked into his eyes, I couldn’t help but tear up,” she said. “Seeing that tiny boy in such bad condition breaks my heart.”

It was not long before XO was taken by a foster family, and he is now doing well and has managed to put on about 11 pounds. Nevertheless, he still has a long way to go before completely recovering.

Luckily, he new foster mom takes great care of him.

“He hangs in her office all day with her, gets his daily bath, eats, goes outside and sleeps on his HUGE bed,” Alyssa explains. “He is in heaven and I feel so lucky to be a part of his rescue.”

Don’t forget to share this uplifting story with all your family and friends!