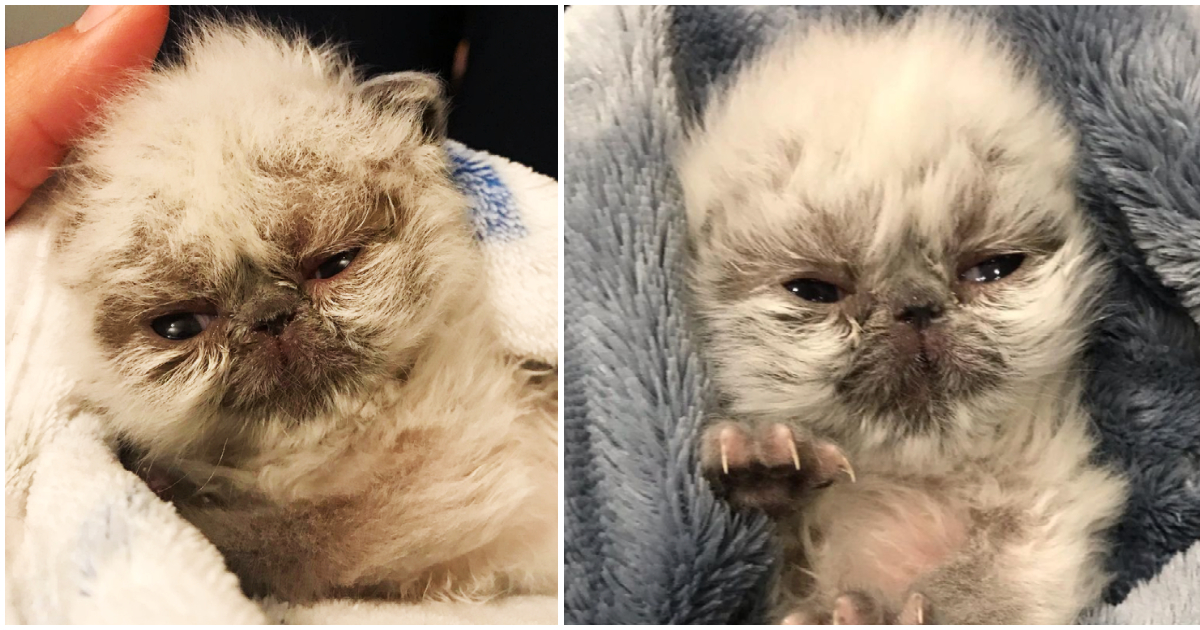 We love to see unique-looking cats and dogs. While they might not be as conventionally cute as some other pets, these animals are special, and their one-of-a-kind looks often make them internet stars.

Like one cat, who may be just a small kitten but who looks more like an old man!

The kitten’s unique look, which many say resembles the face of an elderly man, has made Grandpa a viral star on the internet.

But it wasn’t always that way: at the start of his life, Grandpa was nearly euthanized due to medical conditions.

According to Bored Panda, Stephanie Medrano, a foster parent at Stray Cat Alliance, got a call on March 20 about a newborn kitten who was born with a cleft palate and twisted hind legs.

His owners didn’t know how to deal with the medical issues, and a vet recommended euthanasia due to slim odds of survival.

Stephanie saw the cat, and seeing his uncanny resemblance to an old man, gave him his new name.

“I thought of his name ‘Grandpa’ as soon as I saw his face,” Stephanie told LoveMeow.

Despite the odds against him, Stephanie decided to take in the tiny gray cat. Grandpa required special care: he needed to be tube-fed round-the-clock to keep him from aspirating — due to his conditions, Grandpa was unable to feed from his own mother.

She also gave him massages to help correct his twisted legs.

Despite the low odds of survival, Grandpa has been doing well thanks to all the love and attention Stephanie has given him.

He’s doubled his weight, and his coat came in nicely. He’s now about a month old, and doing well.

Grandpa still has a challenging road ahead, as his conditions will likely require surgeries later in life: “He will require a cleft palate surgery or multiple, depending on his future needs, and leg splints if his legs need more help later on,” Stephanie told Bored Panda.

But for now, little Grandpa is doing well in his new home, loved by Stephanie… and by many new fans online.

Grandpa’s Instagram now has over 10,000 followers, with so many people falling in love with this tiny but old-looking kitten.

Like many internet “grumpy cats,” Grandpa has taken on an online persona we can all relate to:

At just a few weeks old, Grandpa is growing fast and living his best life.

“He was 84 grams when we got him. He is 145 grams now,” Stephanie told LoveMeow. “He just started licking, yawning and stretching. He is so gentle and a very good sleeper.”

You can follow Grandpa’s Instagram for more adorable photos! We hope this adorable kitten continues to grow up strong.