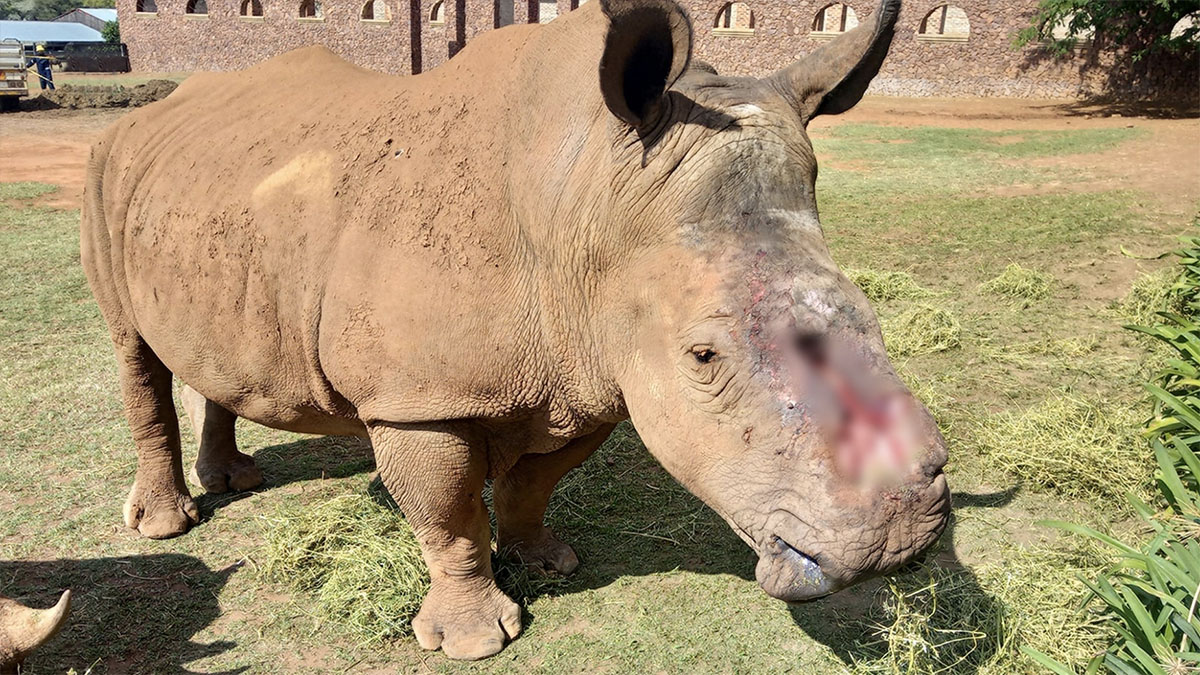 When Seha the rhino was found he had suffered a brutal attack at the hands of poachers in South Africa.

The 12-year-old White rhino bull was found on a game reserve in the North West province after he and four other rhinos were left for dead in a viscous attack by poachers.

Seha – short for Sehawukele meaning ‘have mercy on us’ in Zulu – was the only survivor of the attack in September 2016 and was found in a pool of blood fighting for his life.

Workers at Saving the Survivors, an organization dedicated to looking after injured wildlife victims of poaching, persuaded the owner, who wanted to put him down, to let them try and save the rhino.

Fortunately, the organization – founded by Dr. Johan Marais – was allowed to take Seha and transported him to a secure facility where they treated him.

And now, five years after the attack, Seha has sired a calf called Daniel.

Dorota Ladosz, a veterinary assistant at the organization, said that Seha faced an unimaginable horror at the hands of poachers.

“A group of poachers armed with weapons that very few rhinos have faced and survived,” she said.

Stripped of his identity and dignity

“They hacked into his head, intent on getting every last piece of horn, so valuable that on the black market it’s called gray gold.

“The poachers ripped the horns out of his head, gouging out his facial bones and exposing his sinuses. Stripped of his identity and dignity, Seha was left lying in a pool of his own blood.

“He was taken to a secure facility where Dr. Marais began his treatments. And Dr. Marais never gives up.”

The organization said the brave rhino has endured many treatments over the years and has shown “remarkable resolve and courage to survive.”

Veterinarian Johan Marais who treated Seha said: “I’m just so proud of him, proud that he made it. In a way, I think it’s a real miracle he’s still here.”

Two years after he was rescued he was introduced to two female rhinos and the result was Daniel the baby rhino. The mother rhino, named Lucky, is also a “survivor of poaching.”

Saving the Survivors has partnered with Baby Rhino Rescue, an organization working to save rhinos from extinction, to raise funds to move the rhinos to a new home.

“The good news is that a well secured reserve, complete with armed guards and an anti-poaching unit, has been found,” Dorota said.

“We need your help in transporting him to his new home and in providing care for him. We have also found two female rhinos who are of prime reproductive age that we need to purchase, with your help.”

“Seha needs and deserves to live out his life in the wild, patrolling his territory and breeding as a normal wild rhino. Let’s get Seha into the wild again.”

It really is a miracle that this rhino survived; more needs to be done to stop the brutal act of poaching these precious creatures.

I wish Seha a happy and healthy future.

Please share so more people can help and support these worthy causes.