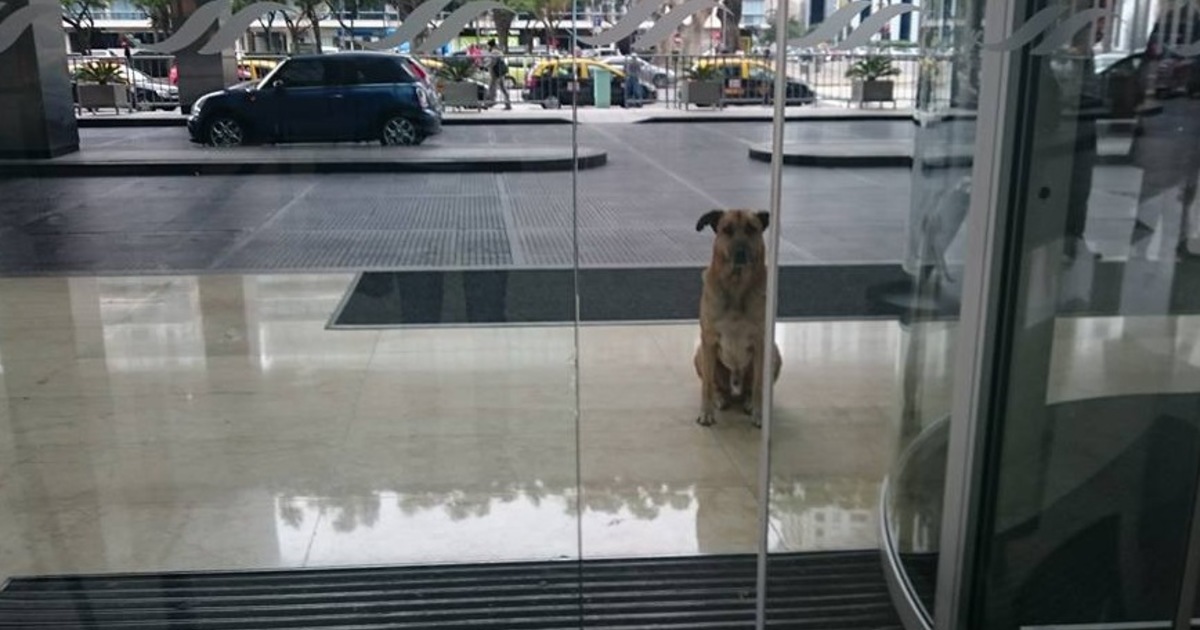 But for this homeless dog that fell for a woman who lives on the other side of the globe, his perseverance would eventually pay off.

Olivia Sievers often travels between her home in Germany to Argentina for work, and it was there that she met a special dog named Rubio.

But the flight attendant had no idea that an unexpected meeting with a street dog would end up giving her a friend for life.

Earlier this year, a German stewardess named Olivia Sievers was on one of her many visits to the Argentine capital, Buenos Aires. Because of her job, she often flies overseas, and when she’s in Buenos Aires, she always stays in the same hotel.

It was there she met a street dog who used to roam the area. She often gave him food and used to play with him. But when playtime was over, the dog refused to leave her side.

“I tried to ignore him at first, because he always wanted to come with me into the hotel,” Olivia told Noticiero Trece. “But it was impossible. He always came back and followed me. I tried to say goodbye for an hour, but he wouldn’t leave my side. He was really happy that someone was giving him attention.”

For the dog, whom Olivia named Rubio, it was love at first sight. He constantly sat at the entrance to Olivia’s hotel waiting for her.

Olivia felt so sorry for him, she used to go out at night and cover Rubio with an airline blanket to keep warm at night.

After her first meeting with Rubio, Olivia went home to Germany, and Rubio returned to wandering the streets. But he never forgot his newfound friend.

The next time Olivia came to visit, she stayed in the same hotel. And Rubio was standing there at the door, wagging his tail to welcome her back.

This went on every time Olivia visited Buenos Aires. Rubio always stood patiently waiting for her.

It was almost as if he had an eye on Olivia’s work schedule.

As you can imagine, Rubio and Olivia soon developed a special bond.

Leaving Rubio pained Olivia every time, and when she was at home in Germany, Olivia simply couldn’t stop thinking about him.

Finally, Olivia took action and contacted a local animal welfare group, which arranged for Rubio to be adopted into a loving home.

But the process stopped abruptly when Rubio escaped and ran away. Though, you can probably guess where they found him a few days later…

This brought Olivia to make an important decision—she would adopt Rubio and take him home to Germany.

After filling in all the necessary paperwork, Olivia brought Rubio home in early August.

Now, Rubio was finally able to leave the streets of Argentina and meet his new family in Germany.

He alot of friends now and enjoys playing with the family’s other dogs in their large garden.

Isn’t it wonderful to see?

Yay, Rubio! What a success story! All thanks to Olivia, and her big heart!

All dogs deserve a happy life with a loving family. Please share Rubio’s story with all your friends on Facebook if you agree!