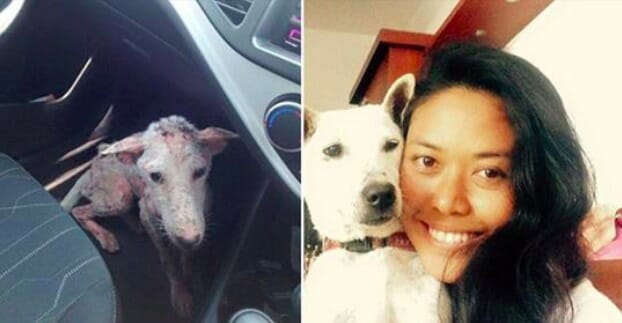 We’ve all had a moment in our lives where we felt we had to take a leap of faith.

It takes immeasurable amounts of faith and trust to do so and the challenge can be daunting. But more often than not, things seem to always work out for the best.

That was certainly the case for one stray dog in absolute dire shape, when a split second decision changed her life forever.

It’s unclear and impossible to know just how long Kelsey had been on the streets. No dog deserves to be scavenging for food, nor lacking treatment and love. But unfortunately for Kelsey, that was her fate for as long as anyone could tell.

Fortunately for Kelsey, things would take a very different turn in her sad life. When the dog crossed paths with a woman one day, she impulsively decided to jump into her car. And that was that.

The big hearted samaritan knew what she had to do. She immediately drove Kelsey to the vet, where it was discovered the poor dog had a plethora of health issues, including mange, malnutrition and disease.

The vet staff were shocked at her condition — it was surprising that she was even still alive.

It was clear that Kelsey’s recovery would be a long and difficult journey but everyone refused to give up on the dog.

They immediately provided Kelsey with nutrition.

… and gave her a much needed bath.

The vet was taken by Kelsey’s incredible determination to survive, despite her terrible state.

Kelsey’s condition gradually improved and it was time to help her socialize and become accustomed to being around kind, compassionate humans.

As Kelsey gradually improved, her true personality began to shine.

As her fur began to grow back, so did Kelsey’s gusto for life. She proved to be a sweet and affectionate dog.

She grew stronger and healthier faster than anyone expected she would.

She proved to love playing and cuddling with people — a huge leap from her original, withdrawn and sad state.

She was also taught to interact with other dogs at the shelter where she was being kept and got along with them very well.

In short, Kelsey proved to be a wonderful and innately happy dog.

It’s no wonder then that she was eventually adopted by a loving woman who brought her into what is presumably her first forever home. We wish this wonderful pair a wonderful life together!

I couldn’t be happier for Kelsey — what a well deserved new life! Share this dog’s incredible journey if you feel the same and agree that all dogs deserve a loving home.