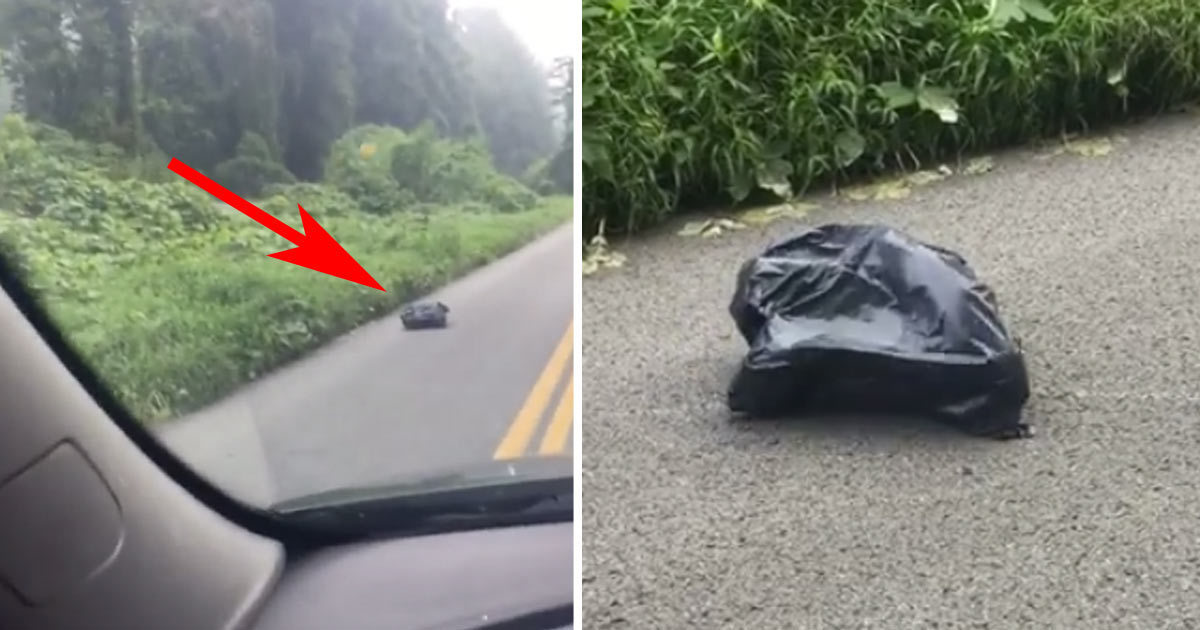 Malissa Sergent Lewis was driving to work one morning last week when she saw something strange on the road: a moving garbage bag.

It was Thursday morning and Malissa was in a rush to get to the elementary school in Kentucky where she works. She decided to take a back road and beat traffic so she wouldn’t be late.

And even though she was in a hurry, she couldn’t help but notice a particular garbage bag.

“I saw this trash bag in the road, and I thought to myself, ‘Did I just see that bag move?’ The closer I got, I realized it was moving,” she told The Dodo.

Something was alive in the bag, and she had to find out what it was.

Malissa approached with caution, since she had no idea what kind of animal was inside. She could see that the bag was tied, so someone must have deliberately left it there.

Malissa carefully tore open a corner of the bag to take a look inside.

“It was a puppy. And he sure was glad to see me. As soon as I opened it up, and he saw light, he just started wagging his tail.”

Malissa could hardly believe what she saw. Someone had dumped the little puppy in the middle of the road in a black trash bag. Who knows how long he had been trapped in the dark?

The puppy had a collar, but there wasn’t any information about his owners. Malissa couldn’t just leave him there, and packed him into her car and took him to school.

Malissa called her son to pick up the puppy from school and take him home. Later, they visited also a veterinarian to make sure the puppy was healthy.

“Who could do something like that to any animal? I don’t care who you are; everybody loves puppies. It’s a real coldhearted person to put an animal, any animal, in a garbage bag and dump it on the side of the road,” she said.

It’s been a few days since they found the puppy, whom they called Hefty. So far, no one has stepped forward or been found. But perhaps it’s just as well—because Malissa has decided to keep Hefty if she can’t find the owner.

“We all love the puppy.”

I’m just glad that Malissa found Hefty. Share this article if you’d also like to thank her for her kindness!