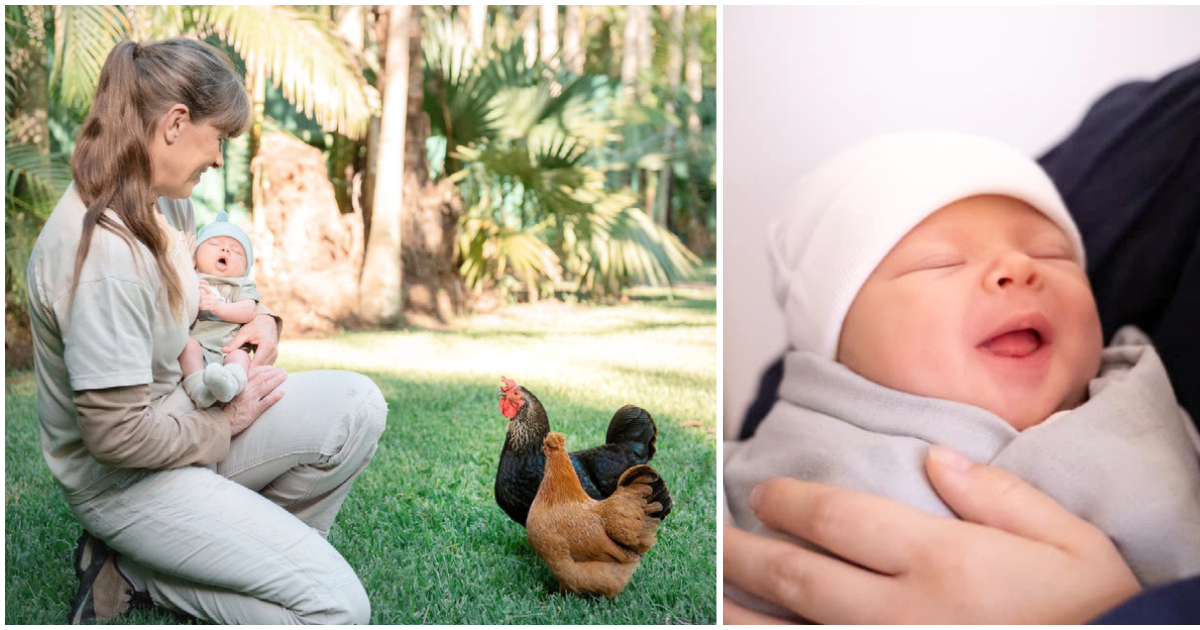 The world lost an icon in 2006 when Steve Irwin, the beloved conservationist and Crocodile Hunter star, died at the age of 44.

But while he may be gone, his family has kept his legacy of helping animals alive. His wife Terri and their children Bindi and Robert continue to play a big part in protecting and showcasing Australia’s wildlife, from running the Australia Zoo to saving tens of thousands of animals during the bushfires last year.

The baby’s middle names were a tribute to the late Steve Irwin, who would’ve been a grandfather for the first time.

And now, it’s already clear that another generation of the Irwin family will follow in Steve’s footsteps.

In an adorable moment, one-month-old Grace had her first animal encounter… with some curious chickens at the family’s zoo.

New grandmother Terri made the introduction, cradling Grace in her arms. “Introducing Grace to some of the animals living in her backyard,” she wrote on Twitter.

Bindi also shared the photo, calling it the “most wonderful moment.”

As part of the Irwin family, Grace will no doubt grow up around all kinds of animals — soon enough she’ll work her way up to creatures much more exotic than the chickens.

Whether or not Grace grows up to feed crocodiles like her famous grandpa (or her uncle Robert) she’ll always have a deep respect for nature as a “Wildlife Warrior,” and it’s great that the family has a photo of her first encounter.

“She’ll be such a wonderful wildlife warrior just like her parents , her grandparents and her uncle Robert,” one reply on Twitter reads.

Last week, Bindi shared another Irwin family photo that lit up the internet, a throwback in honor of National Siblings Day.

It’s a photo of Bindi and Robert, just kids at the time, holding a snake together.

Both siblings are grown up now and have their own careers, following in their father’s footsteps as conservationists and TV personalities.

Steve would be proud to see how much his legacy has lived on through his kids and grandkids. It’s inspiring to see the new generation pass on his love and compassion for animals.

Share this adorable story if you love Steve Irwin and his family.