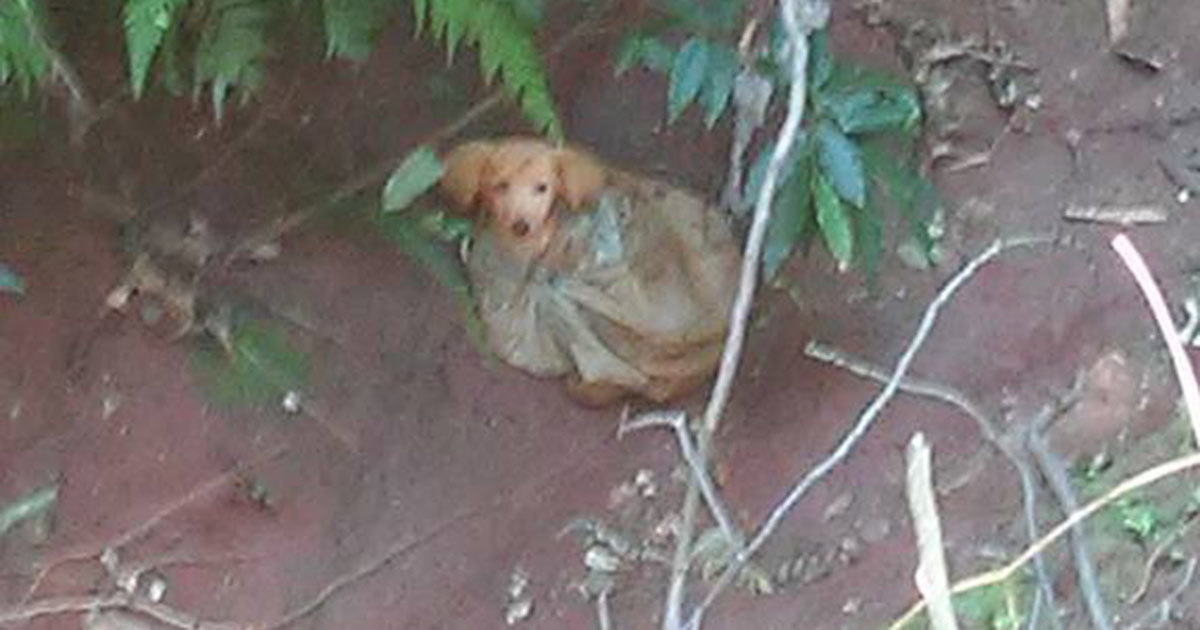 When a woman in Rondon, Brazil looked down into a ravine, she could not believe her eyes. There lay a small, stranded dog, cruelly tied into a plastic bag. The woman quickly realized that descending into the ravine on her own would be a difficult feat. She thus appealed for help on a Facebook animal rights group in her community, reports The Dodo. And the rest is history 🙂

The post appeared on a Facebook animal rights page Arca de Noé that is, ‘Noah’s Arc’, dedicated to protecting animal rights in the city of Rondon, Brazil. A member wrote a post about a small dog she discovered in serious distress. She needed help rescuing him.

“Urgent: He’s stuck in a plastic bag and was thrown into a ravine. I can’t get to him alone. I can not save his life. Can someone out there please help (…). ”

Responses almost immediately came swarming in. Within minutes, several members from the the group’s 1,300 were responding and asking how they could help.

One was a woman named Cláucia Jackeline de Oliveira, who happened to work at a hospital near the dog’s location. Along with another nurse, she promptly seized the opportunity to head toward the location, climb down the steep ravine, and brought the dog to safety.

Between the time the original post went up and the dog was rescued, less than 30 minutes had passed.

Based on the amount of animal waste in the plastic bag where the dog had been confined, Cláucia suspected that the dog had been since the night before. It was virtually impossible for him to get out of the tightly knotted plastic bag. Despite everything, the pup was in good health and good morale when he was rescued.

The only thing left to do was to find the dog a new, loving home. That too proved to be less than a hefty challenge: Cláucia resorted back to the same Facebook page, asking if anyone was willing to adopt him. Just an hour later, a good-hearted person responded, and soon enough the rescued dog had found a home.

Thanks to these regular peoples’ prompt reactions, the little puppy was saved with little damage, taken into a safe home, away from cold wet ravines, and naturally plastic bags. All in the space of a few hours.

Newsner stands firmly on the side of animals and believes in treating them with love and compassion. We couldn’t be prouder of the people in this story who helped rescue this poor dog. They are all real, everyday heroes. Please like and share his story if you agree.