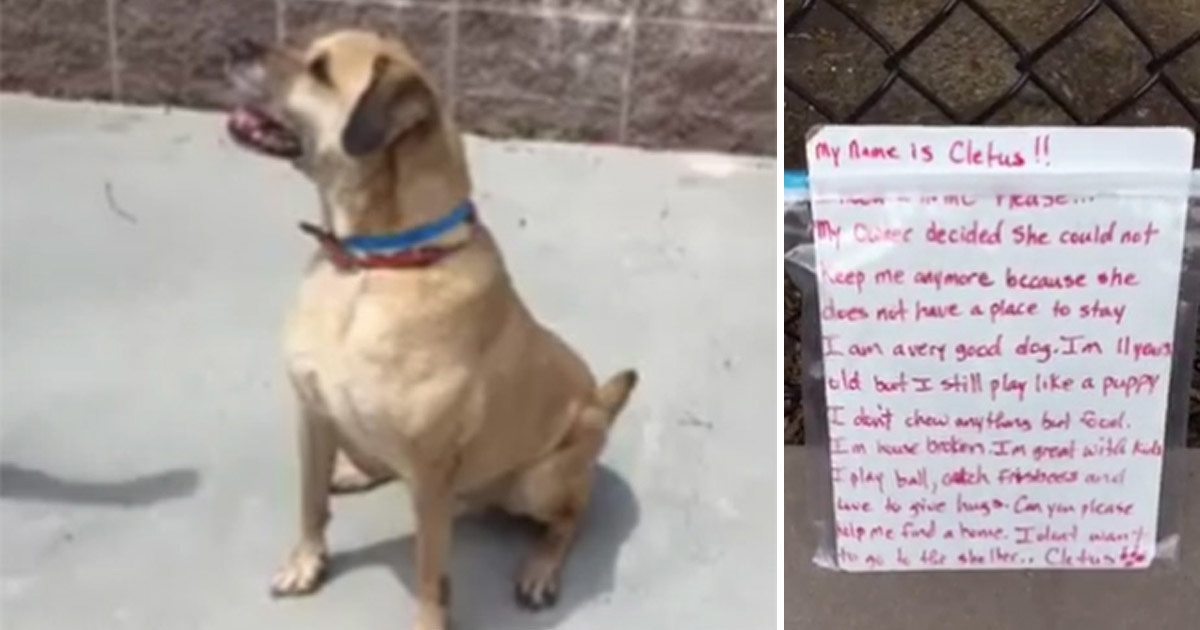 It was an ordinary day at a Snellville, Georgia, USA park – that is, until some passersbys discovered a seemingly abandoned, lone dog, standing near a fence.

Next to the dog were some toys – along with a note, explaining his situation.

As it turned out, the note was written by the dog’s previous owner, who had become homeless- and in a desperate attempt, requested that someone take care of her beloved dog.

The note, written in red ink and taped to the fence behind him read:

“My name is Cletus!

My owner decided she could not keep me anymore because she does not have a place to stay. I am a very good dog. I’m 11-years-old but I still play like a puppy.

I don’t chew anything but food. I’m house broken. I’m great with kids.

I play ball, catch Frisbees and love to give hugs. Can you please help me find a home? I don’t want to go to the shelter.

Cletus’ former owner had clearly encountered some personal difficulties in her life and had been forced to surrender her dearest friend Cletus for her own good – hoping, no doubt, that Cletus would find a new, loving family and a warm and cozy home, instead of having to stay on the cold streets with his owner.

The heartbreaking message quickly reached the Gwinnett Animal Shelter. They took in 11-year-old Cletus and decided to do their best to fulfill his owner’s desire – but unfortunately they believed that it would be difficult.

“Most people don’t want older dogs. It’s very rare. We usually have to save them through a rescue,” Jan Grissom from the animal shelter told 11alive.com.

But luckily, the shelter did not have to worry for long.

After putting up a post on their Facebook page, in which they described the circumstances of the happy and playful 11-year-old Cletus, positive and supportive comments began to pour in.

That very same day, a woman offered to adopt Cletus and bring him to a home where he would also be joined by a black labrador – and just a day later, the animal shelter reported that Cletus had been adopted and was adjusting well to his new home!

Today Cletus even has his own Facebook page. The page helps to keep his former owner informed on his progress and developments, and is also a way to encourage others to adopt dogs from shelters.

“We have two reasons why we are creating this page. 1. The most important reason is to let his mother see him all she wants to and see the life he is having with pics and videos we will be uploading. And the hopes of one day that she might be back on her feet and if she wants to be reunited with Cletus we will be more then glad to bring him home to her. The 2nd reason is because his story has gone viral over the internet media and radio. We are helping Cletus with his permission of course get his other pals out of shelters and into loving homes.”

Watch sweet Cletus play in the video below:

The previous owner just wanted Cletus best – and I hope she gets the chance to see today that he is alive and well. Please share this story with all your animal-loving friends!