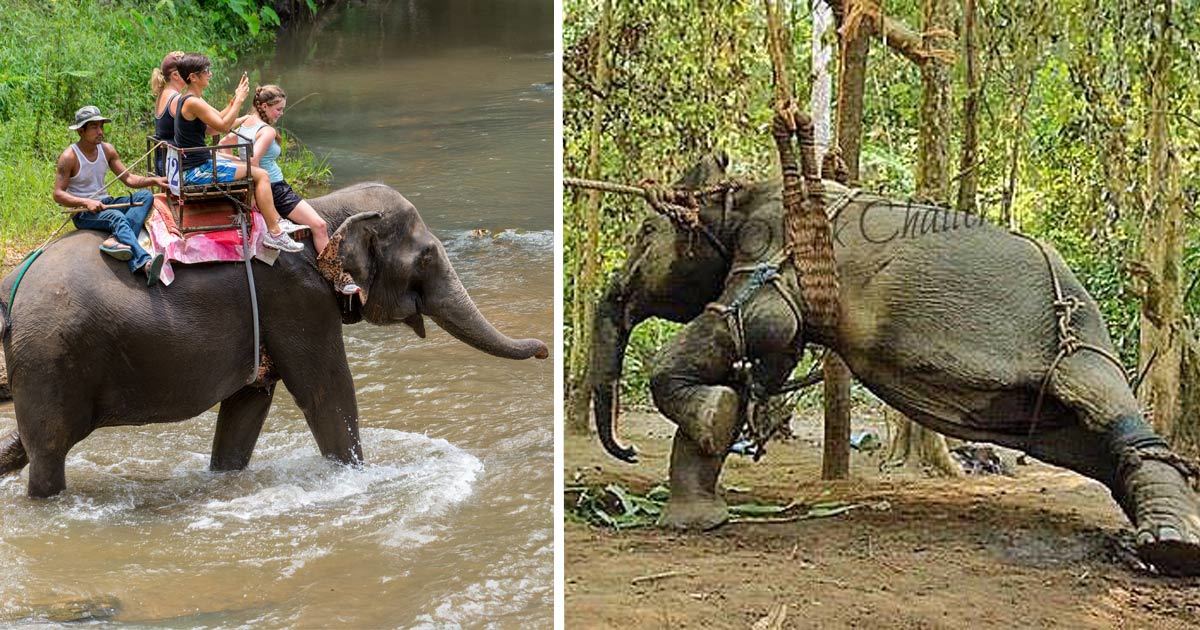 It may look like fun and it seems innocent enough. Elephant riding is popular touristic attraction in many countries – an exotic and amusing activity both adults and children alike can cherish in their memories forever. Indeed, getting so close to such majestic creatures is a naturally exhilarating experience. But not everyone is aware of what happens when the tourists aren’t looking. And tragically, there’s nothing exhilarating about that.

Before reading on, please be warned of potentially disturbing images below. I think they’re still important to share in order for a maximum amount of people to understand that one should simply never ride an elephant in countries where this activity is offered.

The below picture is a classic tourist shot of someone riding an elephant. It looks innocent enough, but the first thing you should know is that elephants are not naturally conditioned to allow huge numbers of tourists to ride them. It takes a certain amount of ‘training’ to get an elephant to ‘agree’ to this.

Elephants are dangerous animals that could easily kill people if they wanted to. To get wild elephants to obey, they have to be broken down. And how is that done?

By beating, kicking, chaining, and tormenting them.

The elephants are often caught in while they are still young. They’re taken from their mothers and locked up in cages. They are beaten and sometimes live without food for long periods of time. According to The Dodo, it also happens that they are forced to stay awake for several days, as a method of torture.

In the end, they learn to obey man. It is the only thing they can do to avoid the pain.

Many tourists believe it’s harmless to ride an elephant, as they’re not damaged or hurt during the riding. But tourists don’t often directly get to see the pain these animals must go through before. If they did, I am sure it could end elephant riding for good.

It’s unclear how many riding elephants are captured and tortured every year. While it should be illegal to capture wild elephants for these purposes, it continues to happen.

But one thing is certain. If all tourists stopped riding elephants, there would no longer be a market for it. Everything is ultimately about money. As long as people benefit from tormenting elephants, the torture will continue. The same rule applies to circus elephants, who are similarly stolen from the wild and mercilessly trained.

If everyone boycotted both elephant riding and circuses, I think we would no doubt be doing these beautiful, majestic wild animals a true service.

Please spread this message with everyone you know… for elephants’ sake.