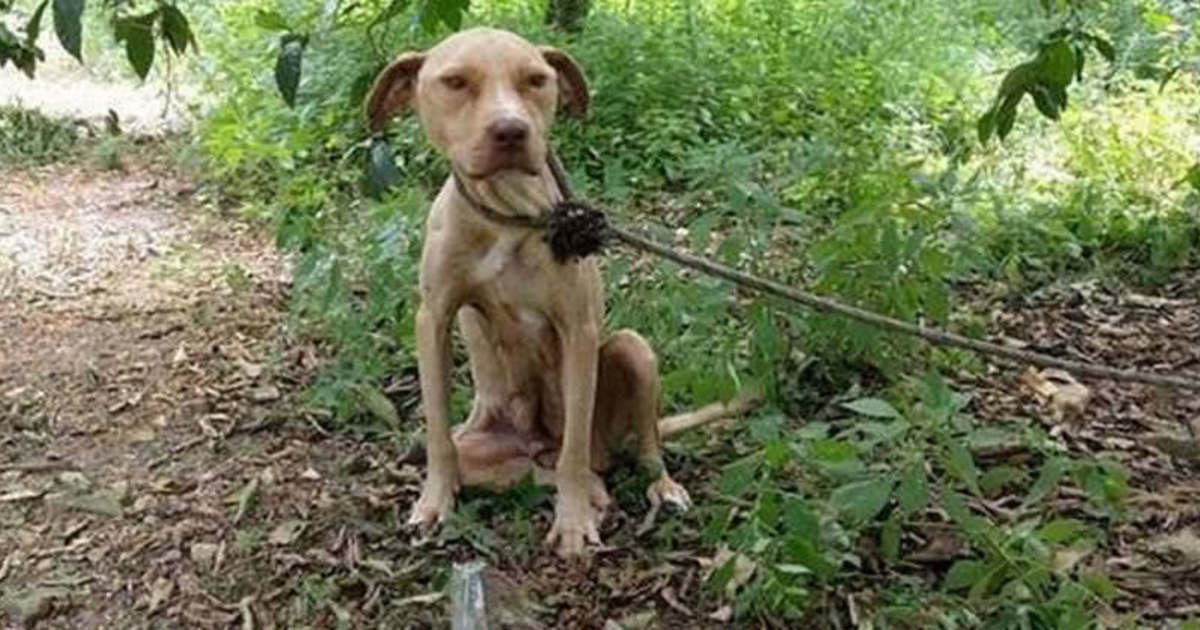 In the world of dog breeds, pitbulls must have one of the worst reputations.

They are often wrongfully labelled as aggressive, dangerous and ticking time bombs who are ready to explode any minute.

But these are labels given by prejudiced people. If these same people were given the opportunity to actually be acquainted with a pitbull — they would most likely remember one thing about them: their big hearts.

If you don’t believe me, keep reading.

Pitbull Lara was found abandoned outside the Greek port of Nafplion.

Lara’s owner not only left the dog in the middle of nowhere, but she was also tied to a tree — without any food or water.

Lonely and scared, Lara was left to her own fate.

To make things even more tragic, neighbors knew that Lara was tied to a tree in the woods, but nobody wanted to approach her because they were scared of her breed.

Nobody knows how long the poor dog had been sitting there tied to that tree.

And the story doesn’t end there — Lara was actually pregnant.

Afraid and alone in the forest, unable to go anywhere, she gave birth to four adorable puppies.

Despite not having adequate food, Lara somehow managed to take care of her puppies for 10 long painful days — until her saviors found her.

Even though nobody in the village wanted to adopt or take care of Lara, luckily someone reported her to an animal welfare organization. The organization became aware that there was a dog tied in the woods who was suffering.

As soon as rescue workers came to the scene and found Lara, they could clearly see that they were dealing with a malnourished and extremely dehydrated dog.

But they were even more shocked to see her little puppies jumping around happily.

Lara had not only done a great job in guarding and protecting them, but also feeding them with whatever she could to find — all while tied to a tree. Talk about maternal instinct.

Despite the mother’s great efforts, the five pups had struggled a lot during these 10 days and unfortunately, the smallest puppy didn’t make it.

But the other four puppies managed to survive, thanks to their heroic mom.

The team who saved the dogs eventually managed to find a foster home that would take care of Lara and her puppies.

Linda at The Orphan Pet came to Lara’s rescue and she also took care of the four little puppies.

Although rescued and in a happy home with Linda, Lara had become shy and didn’t trust her new owner. The mamma dog also refused to eat, as she was clearly traumatized.

But with time, Lara realized that Linda was there to help, and she began to relax and become more comfortable in her new home.

Today the whole family is doing well. Isn’t it so lovely that this story had a happy ending?

All dog breeds have the potential to be affectionate and loving companions — but Lara’s strength and loyalty is really something out of the ordinary.

Please continue to pay tribute to this strong mamma dog and the people who took the time to save her and her little puppies!