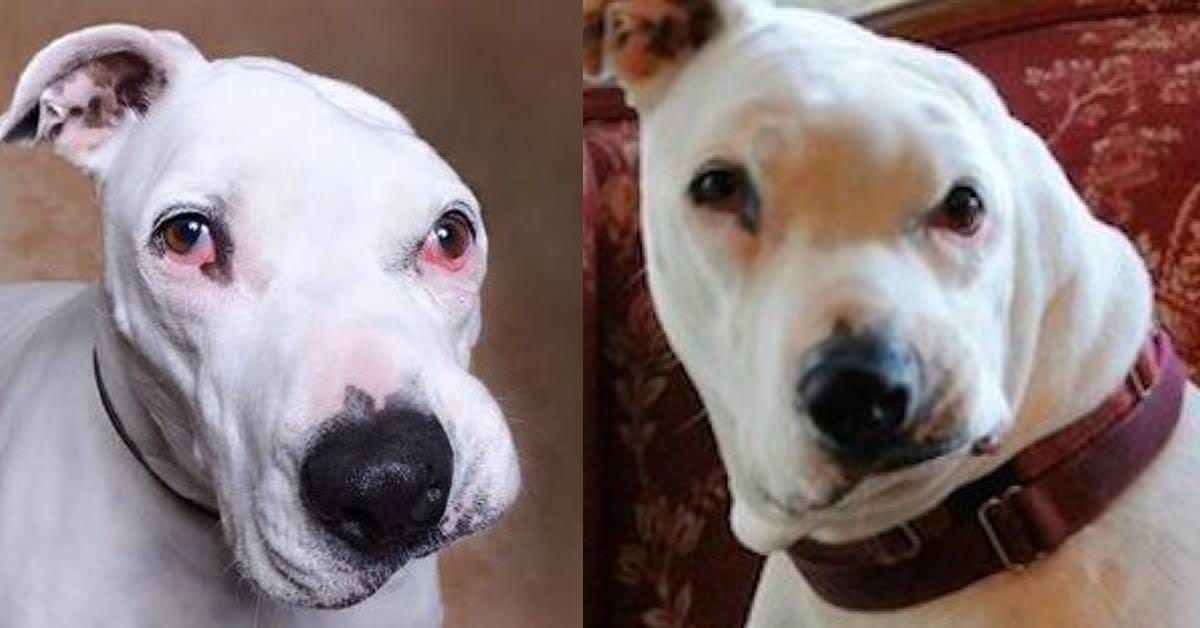 Dog fighting is illegal, yet it still happens. Argentinian mastiff Oogy had not been used as a fighting dog, he had been used to bite other dogs to force them to practice.

Oogy was in a very bad condition. One ear was completely missing, his face was deformed and he had a hole as big as a tennis ball in his skull.

When he became unmanageable, he was locked in a cage without food or water, where he would lie until he died either of his injuries or of fluid damage.

Luckily he was found by the police, who brought him to the vet. He is believed to have laid injured and without water for five days before being found.

At the vet, his life would change forever.

Whether it was fate, chance or God who intervened, who knows, but Oogy suddenly had more luck than he’d ever had in his life.

Just when he was on his way out of the clinic one day for a walk, he tore himself away and threw himself on a 12-year-old boy.

For a second, everyone around feared the worst. What would this abused dog do to a child?

But after everything he had suffered, he only wanted to show love and licked the boy’s face.

The boy was at the veterinarian with his twin brother and father, Larry. They had just put the family’s 17 year old cat down.

The family was so moved by Oogy’s history that they decided to adopt him immediately.

Oogy received a whole new life, filled with love. Every night he slept in Larry’s bed, and lit up the family’s day just with his presence.

It worked out so well that Larry even wrote a book about Oogy to draw attention to the problem of dog fighting.

After 12 years together it was unfortunately time for the family to say goodbye. Despite a tough start, Oogy enjoyed many happy years together with his family.

Posted by Laurence Levin on Wednesday, 7 May 2014

Oogy got to lie on his favorite blanket, eat beef fillet and get pats from the whole family.

For Larry, it was a tough goodbye. Oogy had brightened every day for the last 12 years, and would leave a big hole after he left.

Oogy is indeed a proof that despite the horrible torture, there is always hope for something better.

You can watch a clip about Oogy’s Life here:

Share Oogy’s story with your Facebook friends if you also thing that dog fighting is terrible and shouldn’t exist!