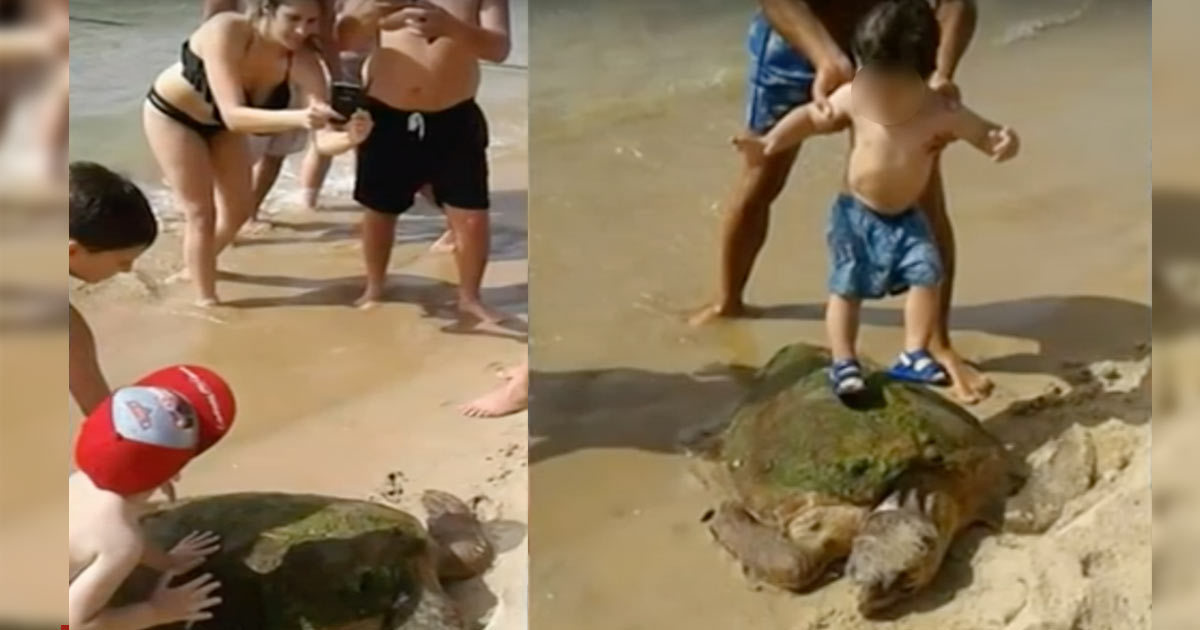 Sometimes I just don’t understand how people think when it comes to animals. Some seem to believe that living creatures are there for their personal amusement, and that animals can be treated however they want.

We’ve previously reported on how tourists removed a baby dolphin from the sea to take selfies with it. We must now sadly report that this kind of senseless cruelty has happened again – this time with a sea turtle.

A month ago, a sea turtle happened to swim a little too close to a beach in Beirut, Lebanon, where a group of sunbathers were. Instead of admiring this beautiful animal from a reasonable distance, the bathers decided to pull it from the water, photograph it, beat it with sticks, and even stand on it.

While several people witnessed the incident, it took a long time before someone at last intervened and stopped the cruelty to the animal.

One picture shws a father lifting up his crying son and placing him on top of the turtle to take a picture.

A witness later told the the organization Animals Lebanon they also saw a person hit the turtle with a stick.

Luckily there were a few animal friends on the beach too, and they managed to stop the assault, moving the tortoise to a safe place.

They could see that the turtle was injured on the head and contacted various animal organizations for help. Two different veterinarians examined the sea turtle and assessed that the damage was recent, no doubt a result from the beach goers.

The turtle must now be rehabilitated before being released back into the sea again. I really hope it recovers quickly!

Never touch wild animals! If you’re ever lucky enough to see one, be respectfiul and take pictures from a fair distance if you like. But never touch the animals!

I really hope that this never happens again. Please share this story with everyone you know to help prevent this senselessness in the future.