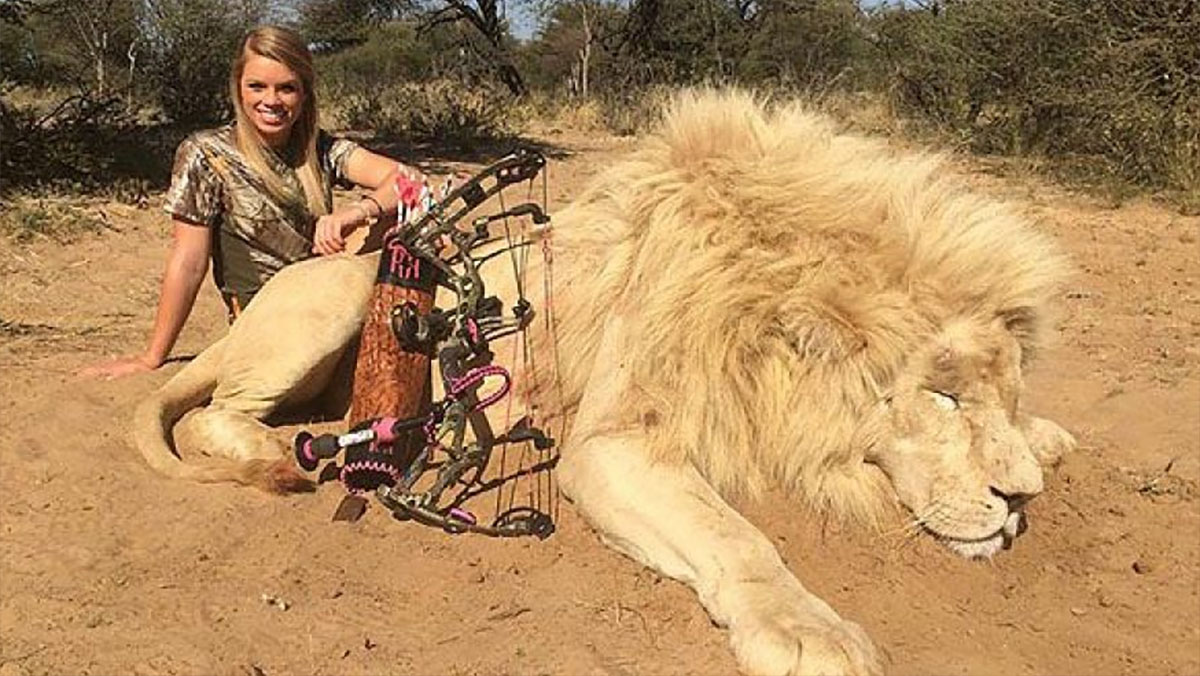 It’s been described as “humanity at its very worst” and is getting worse, despite numerous campaigns and celebrities coming out against the cruel practice of trophy hunting.

The very act of killing an animal just for sport and often posing for a picture alongside its dead body is a sickening act of animal cruelty that shouldn’t still be allowed in 2020, and yet an animal was killed every three minutes by trophy hunters over the last decade, according to a study.

Devastating figures emerged in a new book on the bloodthirsty sport which found that 1.7 million animals have been killed by hunters over the last ten years, including lions, elephants and endangered rhinos and even shooting animals from helicopters.

The harrowing claim was made by author Eduardo Goncalves in his latest book “Trophy Leaks: Top Hunters and Industry Secrets” which reveals the link between the multi-million dollar industry and powerful global figures.

The U.K.-based author and activist is founder of the Campaign to Ban Trophy Hunting and is calling on governments to ban trophy hunting and imports/exports of hunting trophies.

Celebrities have joined him in calling for a ban on this barbaric act including actor and comedian Ricky Gervais who describes it as “humanity at its very worst”.

As reported by the Daily Mail newspaper the book claims South Africa’s president Cyril Ramaphosa is a member of a breeding program that sells rare animals to trophy-hunters and hunters who kill more than 80 different African species get a special prize.

The book also revealed that supporters of the sport funded a disinformation campaign on social media using fake accounts claiming to be Africans opposing Britain’s campaign to ban trophy imports from the country.

Almost 800 hunters have won the ‘African Big 5’ prize, for killing at least one lion, elephant, leopard, a black or white rhino, and a buffalo, according to the book.

“Future generations will look back aghast at how we allowed the world’s most endangered species to be gunned down in their droves by adrenaline junkies in pursuit of grinning selfies and gruesome souvenirs,” author Ramaphosa told the MailOnline.

He added: “Trophy-hunting isn’t about a handful of sick individuals – it is about a huge global industry which wields extraordinary power and manipulates governments.”

The Southern African country of Botswana banned trophy hunting in 2014 and in the wake of the killing of Cecil the lion, Emirates Airlines, American Airlines, Delta, and United Airlines have all banned the transportation of hunting trophies on flights.

Cecil, a black-maned lion in Zimbabwe, was lured with bait, shot with an arrow, and suffered for more than 10 hours before his hunters tracked and finished killing him. His son Xanda met a similar fate two years later.

But according to the Humane Society: “American trophy hunters pay big money to kill animals overseas and import over 126,000 wildlife trophies per year on average.

Many have come out in support of trophy hunting saying much of the money generated goes back into local communities, leaving governments with no incentive to protect wild animals.

Listen to Ricky Gervais in the video below explaining why this isn’t true. Warning: offensive language at the end of the clip.

Whatever the financial implications of trophy hunting killing an animal just for fun has no place in modern society. It encourages a disrespect for our wildlife which now more than ever needs protecting as so many species are becoming extinct or are on the brink.

What do you think about these startling figures? Please leave your thoughts in our comments section and don’t forget to share this story.