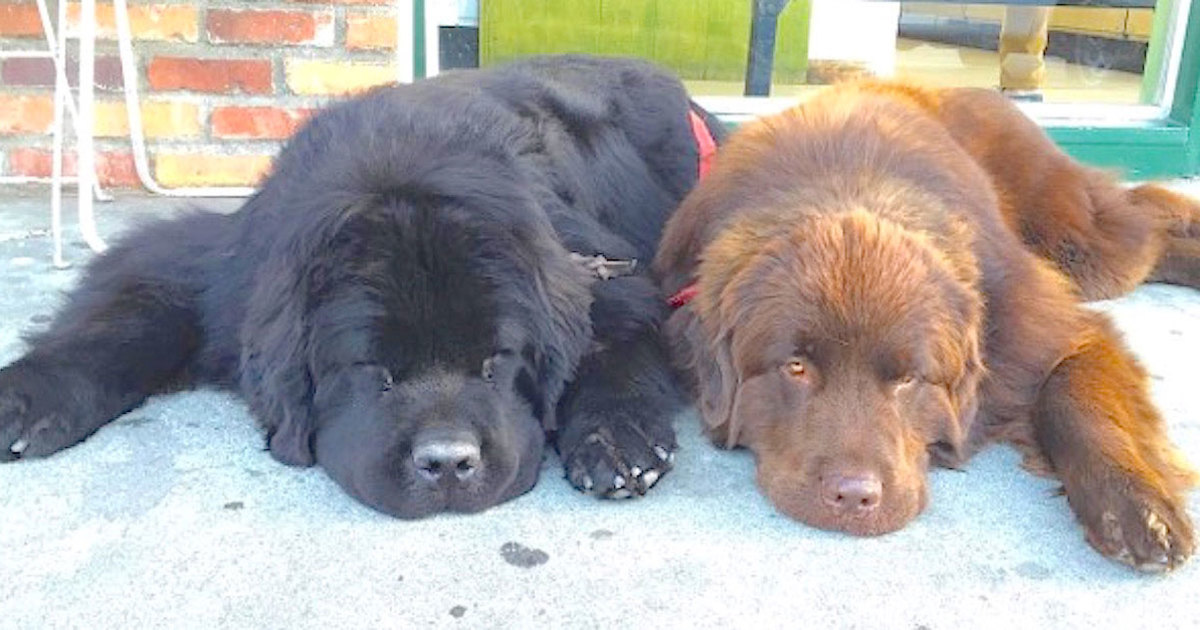 Could Ralphie and Boss be the world’s two biggest babysitters? Maybe not, but they’re undeniably big and bear-like. And in the eyes of the children in their family, they’re definitely giants. Ralphie and Boss are two Newfoundland dogs who’ve developed a very special bond with the three children of the Fisher family in Long Beach, California. The kids love to play with them. But when the family saw how the big dogs were getting? As you can imagine, they were shocked.

Joshua and Bee Fisher decided that they wanted to expand the family. Their three small boys were a delight, but they also wanted something a little bigger…

Joshua really wanted to have a horse, but the family eventually decided on two giant, bear-like dogs, instead. After a little research, Joshua and Bee learned  that Newfoundland dogs are a good breed for families with children.

The Fisher family adopted one-year-old Ralphie in 2014. A year later, they brought one-year-old Boss into their home. Suddenly, the Fishers were a family of seven.

Newfoundland dogs can weigh nearly 60 kilos and stretch nearly 180 centimeters from nose to tail. And though the couple had researched the breed, they were shocked when they saw how big they are in real life.

The family shares their life with their dogs on Instagram, and their page has gone viral. Even publications like the Daily Mail have written about the Fisher family.

“We didn’t realise how big they were in person until we went to get Ralphie from the breeders. When we first saw the older dogs, we were shocked  and we were laughing. Ralphie was this fluffy teddy bear and now he’s grown he’s not as giant as some can be, so Joshua wanted another and somehow convinced me,” Bee told the Daily Mail.

The children were fascinated by the dogs and their size. Eldest son, Lenox, likes to lie on the dogs and rest, while three-year-Cruz would rather play with them.

Joshua and Bee told the Daily Mail that the dogs are great with the kids. “They’re gentle giants,” said Joshua. And they definitely arouse attention.

“It’s like they’re celebrities. Everyone wants a photo or to pet them and we have crowds of people—you can’t do anything when you’re in a rush,” he told the Daily Mail.

See Raphie, Boss, and the whole Fisher family in action here in this adorable video:

Have these two enormous dogs won your heart? Please share with your friends!