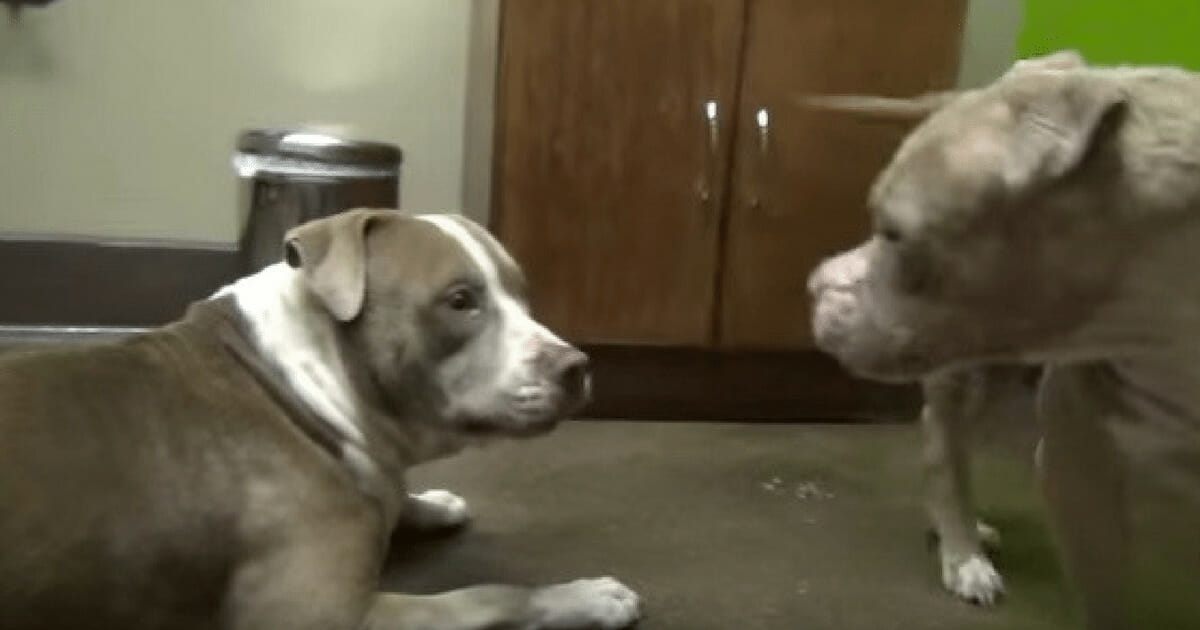 Some years ago, a pit bull by the name of Cadence was discovered by popular animal rescue organization Hope for Paws. Cadence was being used as a bait dog for a fighting ring. The poor dog was covered in scars and wounds, and one could sense the trauma she had endured simply by looking in her eyes.

The very next day, staff from the organization came across another pit bull, this time a dog by the name of Chance. Discovered near a hot dog stand in Los Angeles, California, Chance had been living on the street his whole life and was absolutely terrified of humans. He trusted no one, but staff were able to comfort and gently convince him to follow them back to the safety of the shelter.

Then, a short time later, the two pit bulls were introduced to each other…

Hope for Paws does great work at helping rescue thousands of vulnerable animals and give them a second chance at life. That’s precisely what they did for both Cadence and Chance after they rescued them from their dark fate.

Both dogs had led traumatic lives and it was thus unclear how they would behave around other dogs. They decided to gently test things out by introducing the two pit bulls to one another.

After treating the two vulnerable dogs to warm baths and giving them all the required medical attention, the shelter staff decided it was time for the two shy pets to meet.

As it would turn out — it was ‘love at first sniff’!

Thankfully, their first encounter was filmed and the sweet video of their meeting for the first time spread like wildfire online, with over 4.3 million views on YouTube, and counting!

As soon as Cadence and Chance see each other, they are clearly overjoyed. They both start wagging their tails start to wag and smile.

Just seconds later, they are in full play mode, tapping their paws on the floor and hopping around the room together.

It’s quite clear that the dogs felt immediate chemistry. Despite having rather different histories, they shared one thing in common: having felt neglected, unsafe, and unloved.

Finally – all of that had changed, and they couldn’t be happier to share their excitement and new future with one another.

Cadence and Chance adapted very well to life in the shelter, proving just how far a little love and care can go no matter how harsh one’s past. In fact, it wasn’t long before both dogs were adopted by wonderful families and taken to loving forever homes.

Watch their precious bond in the video below — and remember, every dog deserves a second chance, so adopt, don’t shop!

We couldn’t be happier for both Chance and Cadence. Wasn’t watching these two a pure delight? Share with all your family and friends to bring a smile to their face, too.