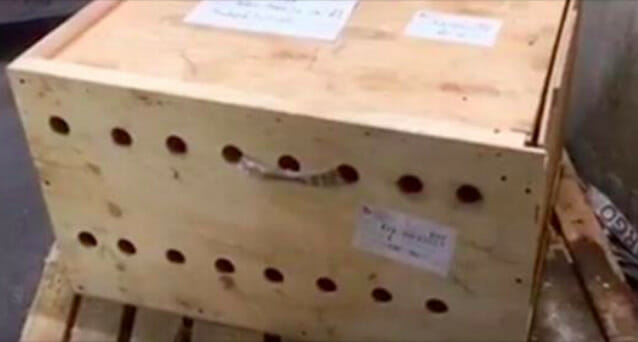 Airports are like their own small cities. Full of hundreds of people coming and going, plenty of shops and restaurants, they’re sure to never be calm or quiet.

People can be seen rushing to make their flights, trying to find their recently arrived loved ones, or searching for delayed baggage.

Meanwhile, security personnel and customs officers must make sure that no one is bringing unauthorized goods into their countries.

fThe box was about 16 inches high, with several holes on its sides. On it was a note that its final destination was Syria.

But aside from the cargo tag, there was nothing significant on the box.

Due to the lack of a proper label on the box, it had stood at the airport for 7 days. Eventually, the unusual box caught the attention of customs personnel.

The airport at last received legal authorization to open the box and uncover its contents.

That’s when the inside was revealed: inside the wooden box lay three small Siberian tiger kittens — nearly dead after surviving for seven days without food nor water.

“Nothing indicated that the box contained tigers or even live animals, and there were no details of a shipper or receiver,” animal rights organization Animals Lebanon wrote on Facebook.

The three male tiger babies had been on a flight from Ukraine and were supposedly destined to be sold to a zoo in Syria.

Following the horrible discovery, animal rights organization Animals Lebanon demanded that the animals be transferred to them. Due to their poor health and for the sake of their well-being, a judge ordered the tigers to be placed in the animal welfare organization’s care, according to the Telegraph.

Animals Lebanon immediately flew a specialized wildlife veterinarian in to examine the tigers. It was discovered that they had not been vaccinated.

“Their paw pads were raw and red from being covered in urine, and were their back legs and thighs,” Animals Lebanon added on Facebook.

Thankfully, through love and care, the tigers’ states improved — but the situation was still critical.

Siberian tigers, which are listed by IUCN as a highly endangered species, are highly sought after in the black market. In addition, the Ukrainian zoo that had sold the tigers demanded their immediate recovery.

“They are improving – but they are still at risk! Big cats can be worth tens of thousands of dollars on the black market. The owner is fighting to get them back, and we are fighting for the tigers and rule of law,” Animals Lebanon explained on Facebook.

At the beginning of May, the good news came at last: authorities in Lebanon had decided that the tigers would not be sent back to their owners and would remain in the care of the animal welfare organization.

Ministry moves to confiscate tigers!The decision of the Ministry of Agriculture is out – the three tiger cubs should…

Posted by Animals Lebanon on Tuesday, 2 May 2017

“Thank you for all the help to make this possible. So many people did more than enough to do the right thing and to prevent the tigers from ending up on the black market!” Animals Lebanon writes on Facebook.

All that remains is the legal decision to release the tigers into the care of an animal sanctuary that would have their best interests in mind.

Watch a video about the tigers below:

Had it not been for this animal rights organization, the tigers could have been sold on the black market and probably met a dark fate.

Share this story to alert everyone of the incredible work animal rights organizations do — and to show why they need our continued support to help and save our beloved animals!