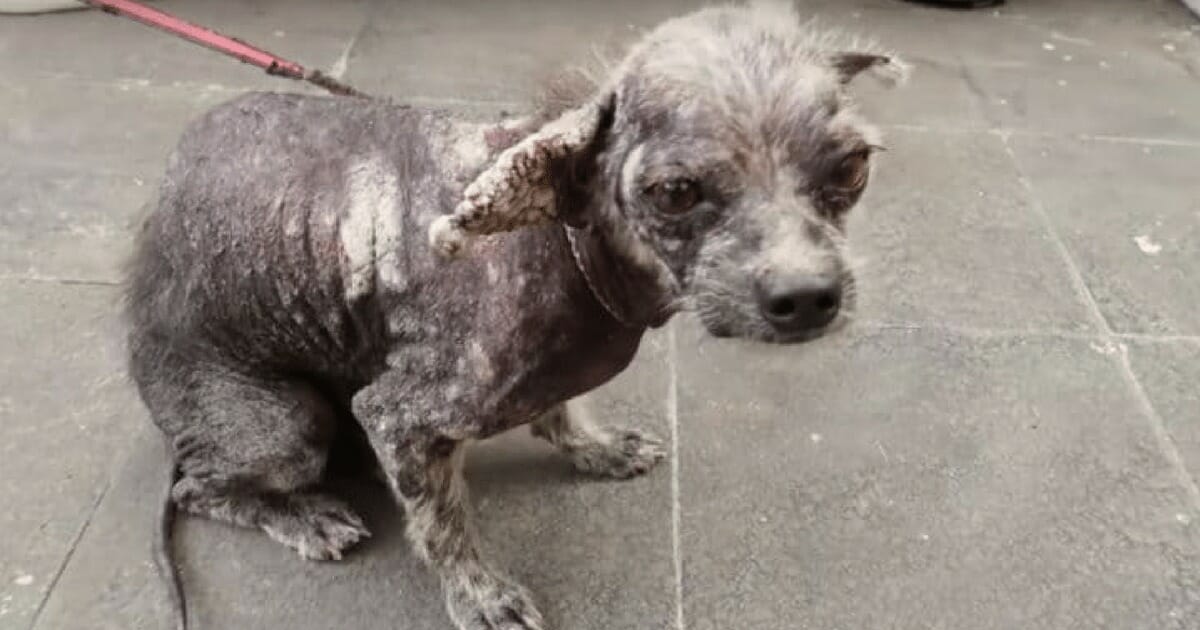 As a dog owner, it really infuriates me when I see or hear stories about dogs being left to fend for themselves on the streets.

Sadly, it’s an all too common occurrence in various parts of the world. Dogs are either abandoned, or born without a loving home to nurture and give them the life they deserve.

As a result, hearing stories of dramatic rescues for dogs that have been on the brink of death warms my heart. One story that’s risen to prominence recently is that of Andrea, a YouTuber also known as Misus Yaya. She found a dog named Benji shivering and alone on the side of a busy road. His condition was so bad that Andrea was advised to put him down. Fortunately, she had other ideas…

When Andrea found Benji at the side of the road, his skin ravaged by mange and his body severely malnourished, she immediately stopped to help.

His ears had crusted over from what was believed to be an infestation of sarcoptic mange, whilst his body was addled with sores and his hair was all but gone. Andrea, knowing he was in serious trouble, rushed him to a veterinarian, who offered a grim diagnosis.

The vet suggested that Benji be put down to end his suffering. As fate would have it, however, Andrea wasn’t ready to give up on him, wanting with every fibre of her being to give him another chance at life.

As she tells it: “I found this dog on the street and when I called the vet he just said the best option is putting it to sleep but he looked so much happier now compared to yesterday,” Andrea said in one of her videos. “I think he has hope to heal. I dont want to put him to sleep.”

To begin with, if he was to have any shot at surviving, Benji required doctor-administered antibiotic injections and around the clock care.

“He smelled so bad back then and taking a bath didn’t help to make him it go away,” Andrea said, after his first proper clean.

However, Andrea persevered. She gave him a bath once a week and rubbed him down every day with virgin coconut oil to utilize its antimicrobial and anti-fungal properties.

Andrea also placed Benji on a healthy diet and gave him copious amounts of love. He needed to know there was someone fighting his corner, and soon he began to change for the better.

His bond with Andrea began to solidify itself, as well. Every time he saw her, he would wag his tail and want to run and play.

After a time, his hair began to grow back and his overall condition improved no end.

“His hair doesn’t stop growing,” Andrea said. “He keeps getting puffier and puffier every day!

“I hope Benji’s story will inspire others to do the same, be kind animals in need and adopt don’t shop.”

Watch Benji’s incredible transformation in the video below:

Without kind souls like Andrea, so many dogs would die every year from negligence on the streets.

Please share this story to spread Andrea’s tale and work towards a future where cases like Benji’s no longer occur.